Scientists were able to find the first active fault zone yet on Mars after NASA's InSight mission spacecraft detected marsquakes, with two standing out loud and clear. These events registered between M3 and 4– both were from an area called Cerberus Fossae– a series of deep gashes or semi-parallel fissures that linger around 1 600 km (994 miles) to the east of InSight's landing zone.

The findings from this work are still pending publication and scientists involved with the InSight team are yet to provide their insights until after the study's release.

"All the expectations we have and all the models we have to try to explain how active Mars might be can now be benchmarked against this measurement," said Paul Byrne, a planetary geologist at North Carolina University, who is not associated with the InSight team. "Mars has just become a bit more alive to us with these data."

The activity could be a key to finding a potentially useful source of geothermal energy on Mars, while the seismic shaking could pose an issue for sensitive scientific instrumentation, according to Tanya Harrison– a planetary scientist specializing in Mars. She is also the manager of science programs at the Planet Federal, a satellite company.

Byrne noted that overall, however, other perils potentially pose greater risks for Mars explorers in the future.

Marsquakes are a promising indication for what's still in store from the InSight mission, which aims to unravel Mars' current tectonic activity, as well as use the small murmurs to map out the red planet's interior– in a similar way an ultrasound sees inside bodies.

"It's a huge deal for Mars science," Harrison remarked. "It's totally mind-blowing."

InSight landed on Mars in November 2018. Christine Houser, a global seismologist at the Earth-Life Science Institute at Toko Institute of Technology, said it is "the most sensitive seismometer we’ve ever put on a planet, as far as I know."

She added that not only it is able to detect "every creak and moans in the crust," but many changes in atmospheric conditions as well.

The Cerberus Fossae fracture extends through pre-existing hills and craters. Scientists said this indicates that the system formed around 10 million years ago or less, which is relatively young. 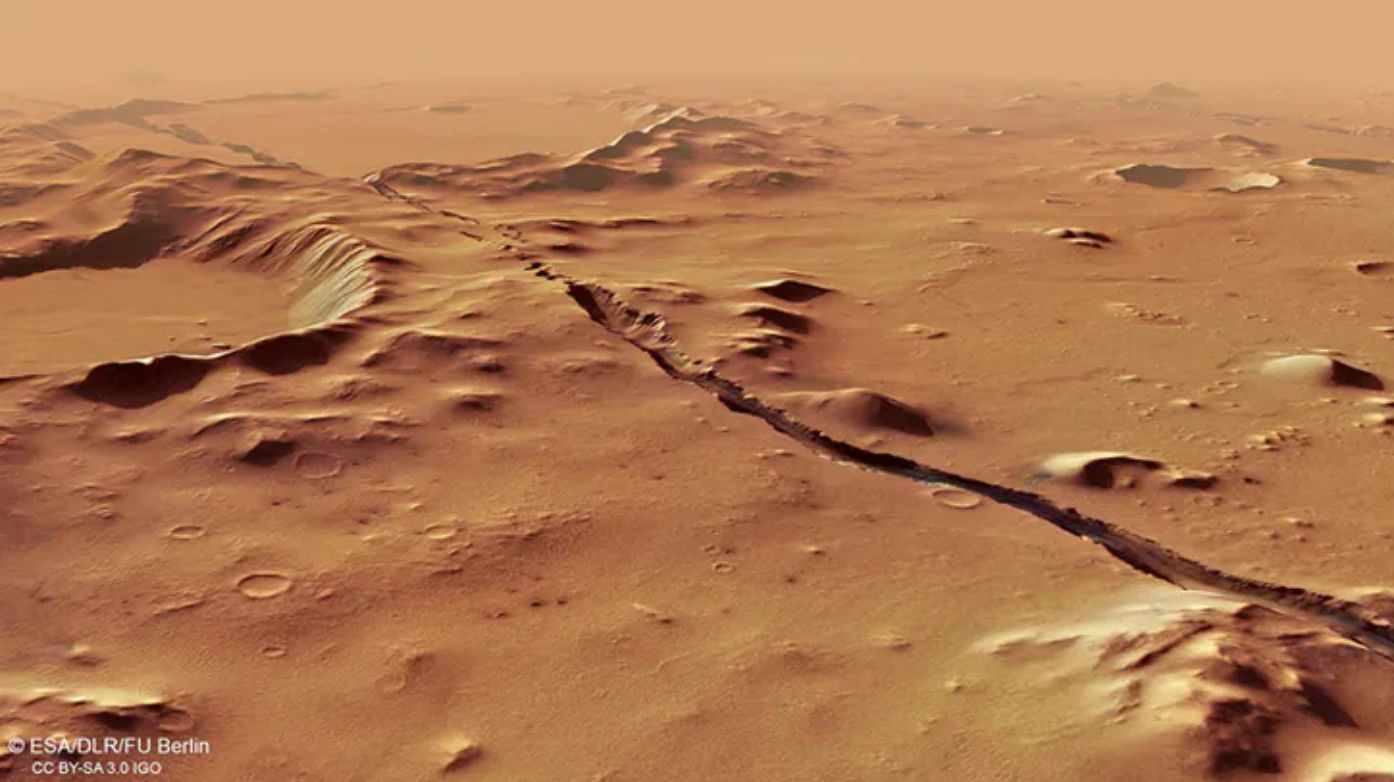 This angled image was generated using data from stereo channels on one of the cameras of Mars Express orbiter. Image credit: ESA, DLR, FU Berlin

InSight detected its first seismic murmur from the planet's interior in April 2019. Since then, rumbles have been occurring with intensifying frequency, with over 300 detected.

Scientists are yet to confirm what mechanism is causing the various internal tremors on Mars.

On Earth, quakes typically come from the unrelenting movement of tectonic plates. This geologic movement creates stress in the crust that occasionally reaches a breaking point. Land can shift suddenly when this happens, producing an earthquake.

Mars, on the other hand, doesn't have plate tectonics. The red planet was a searing mass of molten rock after it formed. It eventually cooled to form a static crust surrounding a rocky mantle.

Volcanoes once spewed lava at its surface, but they have fallen silent for so long. However, scientists suspect that pockets of magma might still remain below, since its stationary crust may act like a lid on a steaming coffee, retaining heat from the planet's formation, Houser explained.

Misha Kreslavsky, a planetary scientist at the University of California, who is not involved with the InSight team noted that "The detected seismic events might suggest that the crack formation is still ongoing."

Other parts of the cracked surface turned into landscapes that were seemingly created by the rush of floodwaters, making Byrne speculate if some type of gurgling water below this region could alternatively be the reason behind the quakes, though he also hypothesized that magma is likely a culprit.

"The history of that area is continuing to be written today."

The NASA InSight mission landed on Mars in November 2018 and successfully deployed its seismometer SEIS in February 2019. It is dedicated to characterize the seismic activity and the internal structure of Mars. Several tens of seismic events have been detected since then. On sol 173 (May, 23rd, 2019) and sol 235 (July, 27th 2019) the two largest events of Mw ~3 have been recorded. They show clear arrivals of P and S waves with high SNR. The first estimations of their epicentral distances and azimuths have been determined by the InSight Mars Quake Service: sol 173 event probability density function (PDF) is at 28±3° distance and 91±10°N azimuth and sol 235 is at 26±3° distance and 74±10°N azimuth. The two PDF ellipsoids are centered on the region of the Cerberus Fossae fault system, the closest and largest tectonic structure (1200km long) near the landing site. It is located in the vicinity of Elysium Mons and supposed to be a dyke-induced, young and active fault system of 4 to 5 main sub-parallel grabens. We provide constraints on location of potential higher stress concentrations based on the detailed analysis of the surface geometry and morphology over the entire graben system. We computed DEMs at local scale derived from both CTX and HiRISE images. Graben widths and throws suggest that the direction of the long-term propagation of faults is towards the East. Additionally, we detect up to four scales of fault segmentation, where segments are formed by 3-4 subsegments at each scale and separated by geometrical complexities, as observed on Earth. The inter-segments and fault tips are expected to concentrate higher stresses, where marsquakes are more likely to occur. Additionally, segment lengths are related to the seismic momentum implying that smaller segments could be involved in such medium quakes, with possible local surface expression like fallen boulders or landslides. Based on our analyses, we expect the youngest parts of Cerberus Fossae major grabens being the most seismogenic. In particular, their eastern tips seem the most probable source of sol 173 and sol 235 events. To improve the epicenter location determination, these observations will be associated to recent and future high-resolution satellite acquisitions in order to monitor the collapsing of boulders and mass wasting potentially triggered by the seismic activity.