According to Danish Meteorological Institute (DMI), an early melt event over the Greenland ice sheet occurred this week, smashing by a month the previous records of more than 10% of the ice sheet melting. The melt was driven by warm air advected from the SW bringing rain along the coast.

Based on observation-initialized weather model run by DMI, almost 12% of the Greenland ice sheet had more than 1 mm of melt on Monday, April 11, 2016, following an early start to melting the previous day.

Peter Langen, a climate scientist at DMI, said they had to check that their models were still working properly. “Fortunately, we could see from the PROMICE.dk stations on the ice sheet that it had been well above melting, even above 10 °C (50 °F). This helped to explain the results.”

“Even weather stations quite high up on the ice sheet observed very high temperatures on Monday,” said Robert Fausto, a scientist at GEUS who maintains PROMICE.dk melt data. “At KAN_U for example, a site at 1 840 m (6 036 feet) above sea level, we observed a maximum temperature of 3.1°C (37.58 °F). This would be a warm day in July, never mind April.” Other PROMICE stations in the network at lower levels had daily average temperatures between 5 and 10 °C (41 and 50 °F).

Similarly, around the coast of Greenland where DMI has climate records dating back to 1873, Greenland came close to setting a record temperature for the whole of Greenland in April. Kangerlussuaq measured a daily maximum of 17.8 °C (64.04 °F) and the DMI observation station at the Summit of Greenland set a new “warm” April record of -6.6°C (20.12 °F). “Everything is melting,” observed Nuuk resident Aqqaluk Petersen.

Left: Maps showing areas where melting has taken place within the last two days. Right: The percentage of the total area of the ice where the melting occurred from January 1 until 11th May (in blue). The dark grey curve represents the 1990-2013 average. The grey shaded area represents the year to year variation for each day. Credit: DMI

The melt was driven by warm air advected from the SW bringing rain along the coast, similar to an extreme melt event in 2012.

“It is a very unusual situation, especially so early in the year, with very cold air and deep low pressures system to the west and east of Greenland and very warm air forming a “cap” over the island. This helped to force a frontal system with very warm air up the west coast bringing rain over the ice sheet. A freezing level of 2.4 km (1.49 miles) over Narsarsuaq is highly unusual (compare to Portugal), as is a 500 hPa height of almost 5 760 m (18 897 feet), a value typically observed in the subtropics – in summer. The very cold weather by contrast in north eastern Greenland is exactly what we would expect with this pattern.” 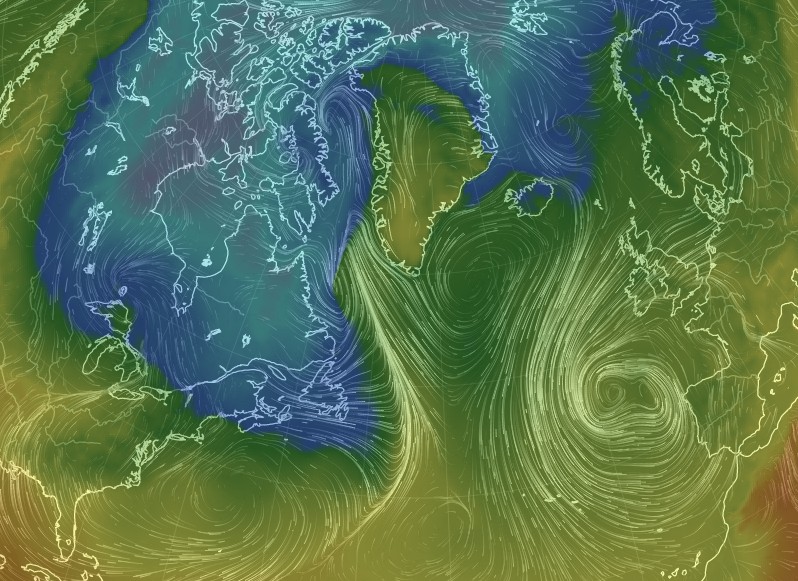 Weather forecasters Marie Rasmussen and Jesper Eriksen at DMI expect the situation over Greenland to gradually cool over most of the island this week, though a new frontal system from Thursday (April 14) may again cause widespread melt, especially in the south.