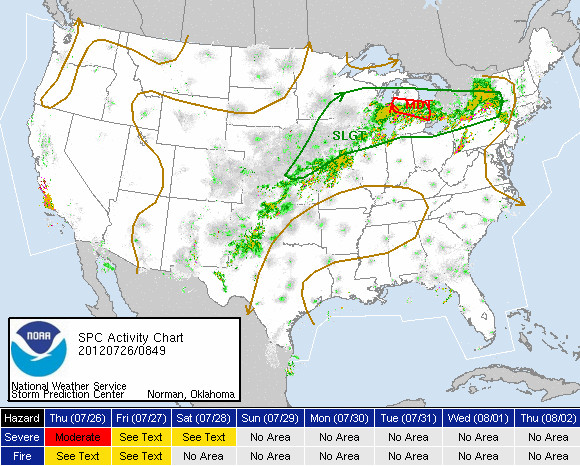 A frontal system is on the move out of the Great Lakes and is set to bring a significant threat of severe thunderstorms from the Northeast to the Ohio Valley on Thursday, July 26, 2012.

The potential exists for widespread damaging winds from parts of New York and southern New England to Ohio. In addition, large hail and a few tornadoes are also possible.

A derecho, the kind of storm that knocked out power to millions in Washington last month, may accompany bad weather forecast for New York City and the rest of the Northeast, the U.S. Storm Prediction Center said on Wednesday.

The NWS Storm Prediction Center in Norman, Oklahoma is forecasting the development of widespread damaging winds over parts of the Ohio valley to interior southern New England this afternoon.

The areas most likely to experience this activity include:

Elsewhere, severe storms are also possible from Oklahoma to the mid atlantic region, and across Wisconsin.

The risk for widespread damaging winds will increase from midday to mid afternoon from Indiana and Ohio across Pennsylvania…southeast New York…into western Massachusetts and Connecticut.  New thunderstorm development is expected today in association with a surface low pressure system that will move eastward across New York to southern New England by early tonight…and along a trailing cold front across Pennsylvania into the Ohio Valley.  How far South ongoing thunderstorms progress into New York, Pennsylvania, Ohio and Indiana this morning will also influence the location of new thunderstorm development later today.

The new afternoon storms will move quickly eastward in several bands across the moderate risk area when the storm environment will become quite supportive of damaging winds with hot afternoon temperatures, strong instability, and moderately strong winds in the middle parts of the atmosphere.  Additionally, a couple of tornadoes will be possible this afternoon and evening, primarily across southeast New York into western Massachusetts and Connecticut.

Some of the larger cities that will be potentially impacted by these severe thunderstorms will include Cincinnati and Columbus in Ohio, Pittsburgh and Philadelphia in Pennsylvania, and New York city.

State and local emergency managers are monitoring this developing situation. Those in the threatened area are urged to review severe weather safety rules and to listen to radio, television, and NOAA weather radio for possible watches, warnings,and statements later today.