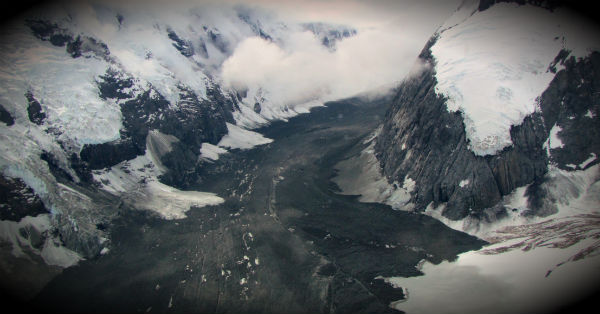 A massive landslide, one of the biggest ever seen in North America, has covered a more than 9 km run of the Johns Hopkins Glacier in Glacier Bay National Park in Alaska. A huge chunk of the slope of Lituya Mountain sloughed off June 11 and cascaded into the valley below. It slid down with such force it registered as a small earthquake. USGS registered 3.4 magnitude which is rather large considering that landslide produced it. Marten Geertsema, a research geomorphologist for the provincial Forest Service in British Columbia, called it biggest slide he’s seen in North America, though he said one in Russia on a September 2002 covered more than 32 km area.

Landslide pushed a powerful “air blast” down the valley in front of it. In places the blast is thought to have tossed rocks and other debris as much as 500 meters above the slide’s surface. Though the speed of the air blast hasn’t been calculated, it is estimated  as fast as 320 km/h (200 mph). 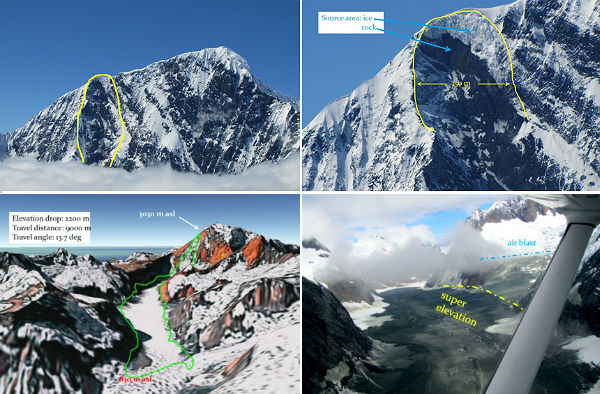 The slide is not readily visible from the ground or from boats on Glacier Bay, as it’s estimated to be 20-25 km “up glacier” from the bay and deep within the Fairweather Range. Since the glacier moves at a pace of 3-5 meters per day, park officials add, it could be years before this debris reaches the snout of the glacier.

Image based upon Landsat 7 data shows that the landslide had a run-out distance of about 9 km and a surface area of about 9.3 square kilometres which makes this is a really big landslide. The cause of the slide, which  hasn’t been determined. It went unnoticed for a month until discovered by a pilot flying over the glacier on July 2 by an air taxi pilot, Drake Olson. It  was detected remotely by Colin Stark at the Columbia University on the day that it occurred, and Keith Delaney at the University of Waterloo identified the location from a satellite image a few days later. A breakdown in the permafrost on the mountain could be to blame. 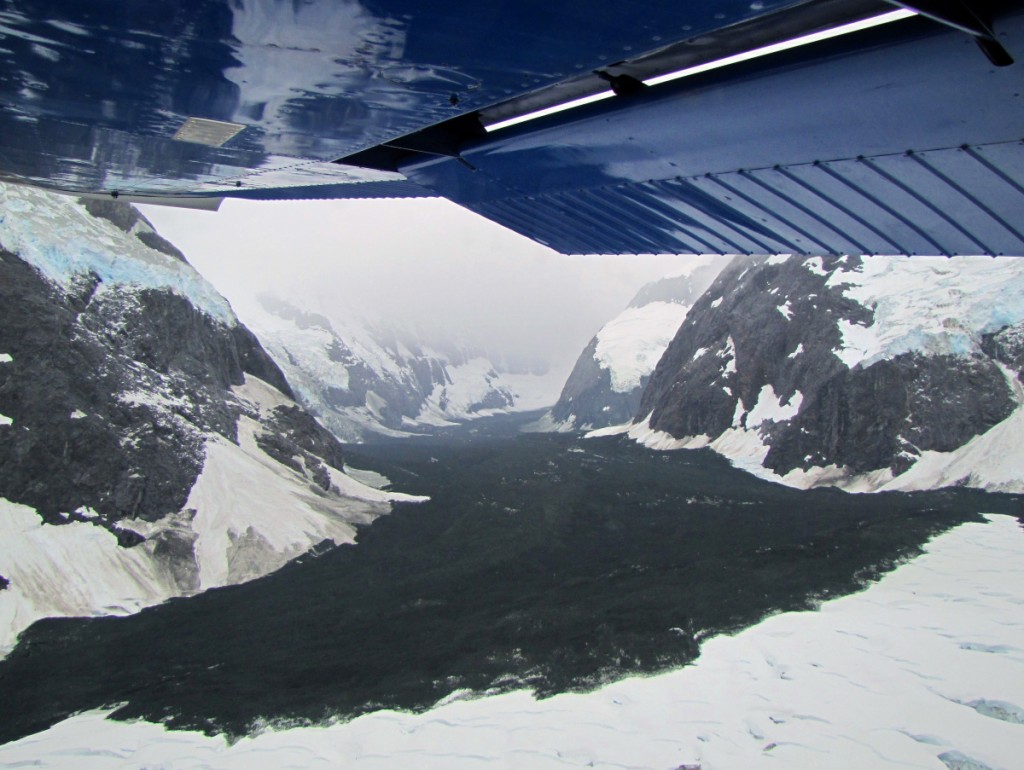 The dynamics of the landslide are similar is some ways to those of the Seti River landslide in Nepal about a couple of months ago, with a large rockslope failure, a large fall height and then a long run-out of the debris.  The National Parks Traveler article  provides an image of the landslide source.

A really interesting issue now is how this will affect the dynamics of this glacier.  The addition of a large volume of rock, which adds both weight and a mantle of dark material, may have some key implications for the way that the glacier moves. There are several factors that contribute to the likelihood of mountains collapsing. Sometimes it is caused by a general weakening of the rock. Other times it could be due to a very large snowpack that melts quickly. Many areas of mountain permafrost have been thawing in recent decades as temperatures warm, and some experts are becoming convinced that thawing is a factor in the frequency of rock slides. Swiss scientists are becoming increasingly convinced that climate change is playing a role in the frequency of rock slides after looking at data from instruments measuring temperature and the widening and narrowing of gaps in the rocks in the Alps.

Lituya Mountain has been the scene of extraordinary geophysical event on July 9, 1958, when an earthquake along the Fairweather Fault loosened about 40 million cubic yards of rock above Lituya Bay. The impact of this enormous volume of rock falling from approximately 1,000 m produced locally the largest recorded tsunami (an estimated 520 meters high) and devastated the entire bay. The wave destroyed lands and trees up to 524 meters above sea level around the bay. The edge located to the west of the Gilbert Inlet at the bottom of the Lituya Glacier was the most affected place. Last month’s slide covered more land area than the 1958 incident, but even so it probably won’t go down as the biggest one by volume in North America. Eruption of Mount St. Helens generated 2.8 cubic kilometer rock slide avalanche in May 18, 1980.

Lituya Mountain is a peak in the Fairweather Range of Alaska, United States, south of Mount Fairweather. Its eastern slopes feed a branch of the Johns Hopkins Glacier, which flows into Glacier Bay. The Lituya Glacier flows from the south side of the mountain and flows into Lituya Bay on the Pacific coast. Lituya Mountain possess great vertical relief over local terrain.