Geomorphologist Colin Stark, whose team at Columbia University's Lamont-Doherty Earth Observatory discovered both the 2016 Glacier Bay and the 2015 Taan Fiord landslides, said events such as this happen maybe three to five times per year around the world, and Southeast Alaska is the global hotspot.

Both events were registered by seismograms monitored by the Global CMT Project at Lamont-Doherty Earth Observatory using a special technique invented by Stark and seismologist Göran Ekström. The technique uses seismic waves to detect landslides in remote areas where they might otherwise go unrecorded.

Stark is headed to Glacier Bay this week, and he took a team to Taan Fiord this spring and is returning in August to study how the landscape and geology affected the landslide and tsunami there. What the scientists learn from recent landslides can help assess landslide risks facing Southeast Alaska and other areas in the future. 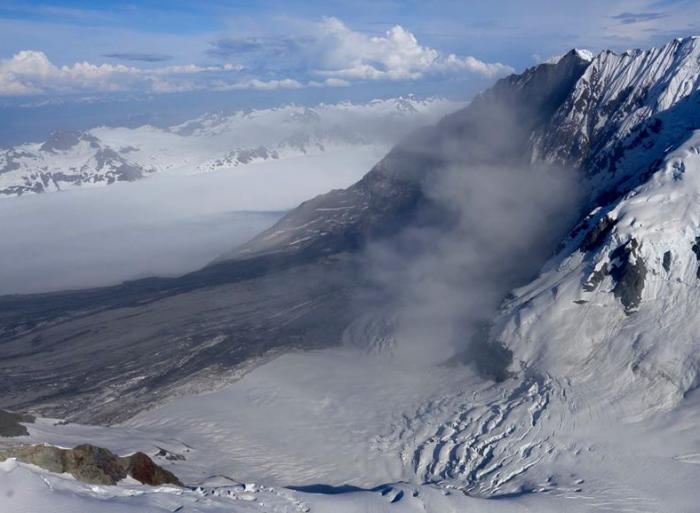 Stark and Ekström’s preliminary analysis of the Glacier Bay landslide, which had a 5.2 magnitude, suggests the collapse started at 08:21 local time on June 28, 2016, when a rock face estimated to have been about 1.3 square km (half a square mile) in size collapsed on a high, steep slope.

The rocky debris appears to have accelerated for almost a minute over about 2 km (1.25 miles), Stark said. Once it hit the ice of Lamplugh Glacier, the debris kept sliding, pushing up snow and ice as it moved. A pilot who later landed near the end of the landslide, about 10 km (6 miles) from the collapse site, found that the thickness of the debris there was more than twice the height of a man.

Once the clouds clear and satellite images become available, the scientists will be able to calculate the volume of the Glacier Bay collapse. From their seismic analysis, Stark and Ekström estimate the landslide to have been about 120 million metric tons – the equivalent of about 60 million mid-size SUVs tumbling down a mountainside. 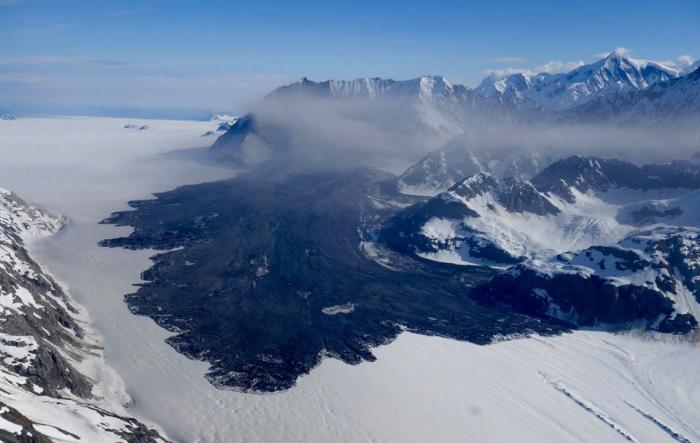 As the scientists and their colleagues zoomed in on images of Lamplugh Glacier and the inlet walls around Glacier Bay this week, they pointed out signs of past landslides there. Such signs were detected at Taan Fiord too.

“It’s pretty much the same geology. It’s just a matter of time and space when another landslide will strike,” Stark said. “The thing that really got me: If it just happened a bit further over, near the calving front, that would be a very bad thing. You can see in Google Earth – that’s a cruise ship right there. If the landslide had been closer, it likely would have dumped some debris in the inlet.”

What triggers giant landslides often isn’t clear. In his Alaska research, Stark has noticed that there tend to be more in warmer months, which may be related to warming temperatures or meltwater. Those are some of the questions his team hopes to start answering through their work in Taan Fiord this year.

The scientists have been studying the geology of the fiord and measuring the trim line along the edges where the tsunami wave stripped away the trees and scattered them like match sticks. Colleagues from other universities, the National Park Service, and U.S. Geological Survey are looking at other aspects, including the types of sediment carried by the tsunami wave and the influence of the shape of the fiord below the water line. Pat Lynett of the University of Southern California has been working on modeling how the fiord’s shape would have affected the behavior of the tsunami.

“Putting this in geological context is really important,” Stark said. “These walls are failing by the very nature of the process.”

Glacier Bay has had other spectacular landslides, including one in 2014 on Johns Hopkins Glacier. According to USGS reports, a large earthquake in 1958 triggered a landslide in Lituya Bay, on the coast, which generated a tsunami that killed two people in a fishing boat.