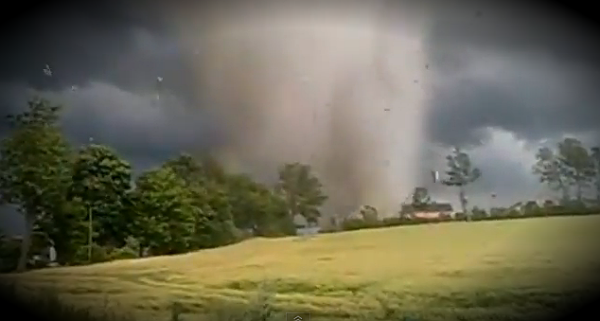 Powerful wave of tornadoes ripped through the north-western part of Poland on Saturday evening leaving more than 100 houses destroyed and about 400 hectares of woodlands in Bory Tucholskie forest flattened. Tornadoes hit the Kujawy-Pomerania and Wielkopolska provinces. The districts of Bialaczow, Zarnow, Paradyz and part of the Opoczno area were worst hit.

Ten people were injured in the storm, and at least one person was killed. Warsaw Voice reports that the twisters have been categorized by meteorologists as a F2 tornado with wind velocity of up to 200 km/h. There are reports that tornado sucked up water from the lake near Wycinki village. Power lines were also downed leaving homes cut off, roads were closed and train services disrupted. Hundreds of rescuers were working to remove fallen trees.

Area of 400 hectares covered by trees have been destroyed. Janusz Kaczmarek, chairman of the Regional Directorate of State Forests in Torun, told Polish Radio that access to the forest is virtually impossible at present, with trees piled five meters deep in places.

Strong winds and torrential rain caused massive damage across central Poland this Thursday and Friday also. The tornadoes were the latest outburst of violent weather that has battered Poland since the start of the month with hailstorms, gales, cloudbursts and flash floods. 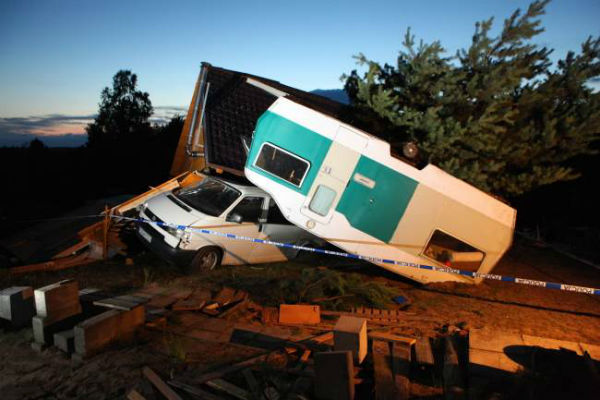 Southern and central Poland experienced a tornado outbreak between 15 and 16 August 2008 leaving 4 fatalities. Tornadoes affected Opole Voivodeship, Silesian Voivodeship and Łódź Voivodeship. A long-lasting tornado moved northeastwards through populated areas. Maximum tornado was rated as massive F4 tornado. Poland experienced tornado outbreaks back in May 1958 in Rawa Mazowiecka and Nowe Miasto and in July 1931 in Lublin which is believed to reached F5 level.