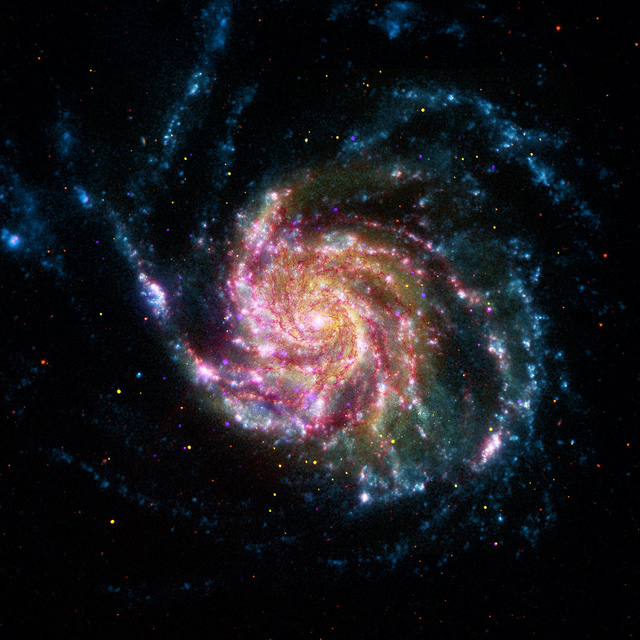 New evidence from NASA’s Chandra X-ray Observatory challenges prevailing ideas about how black holes grow in the centers of galaxies. Astronomers long have thought that a supermassive black hole and the bulge of stars at the center of its host galaxy grow at the same rate — the bigger the bulge, the bigger the black hole. However, a new study of Chandra data has revealed two nearby galaxies with supermassive black holes that are growing faster than the galaxies themselves.

The mass of a giant black hole at the center of a galaxy typically is a tiny fraction — about 0.2 percent — of the mass contained in the bulge, or region of densely packed stars, surrounding it. The targets of the latest Chandra study, galaxies NGC 4342 and NGC 4291, have black holes 10 times to 35 times more massive than they should be compared to their bulges. The new observations with Chandra show the halos, or massive envelopes of dark matter in which these galaxies reside, also are overweight. 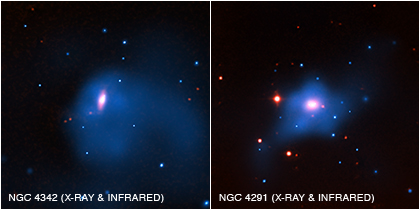 “This gives us more evidence of a link between two of the most mysterious and darkest phenomena in astrophysics — black holes and dark matter — in these galaxies,” said Akos Bogdan of the Harvard-Smithsonian Center for Astrophysics (CfA) in Cambridge, Mass., who led the new study.

NGC 4342 and NGC 4291 are close to Earth in cosmic terms, at distances of 75 million and 85 million light years. Astronomers had known from previous observations that these galaxies host black holes with relatively large masses, but are not certain what is responsible for the disparity. Based on the new Chandra observations, however, they are able to rule out a phenomenon known as tidal stripping.

Tidal stripping occurs when some of a galaxy’s stars are stripped away by gravity during a close encounter with another galaxy. If such tidal stripping had taken place, the halos mostly would have been missing. Because dark matter extends farther away from the galaxies, it is more loosely tied to them than the stars and more likely to be pulled away.

To rule out tidal stripping, astronomers used Chandra to look for evidence of hot, X-ray-emitting gas around the two galaxies. Because the pressure of hot gas — estimated from X-ray images — balances the gravitational pull of all the matter in the galaxy, the new Chandra data can provide information about the dark matter halos. The hot gas was found to be distributed widely around NGC 4342 and NGC 4291, implying that each galaxy has an unusually massive dark matter halo and that tidal stripping is unlikely.

“This is the clearest evidence we have, in the nearby universe, for black holes growing faster than their host galaxy,” said co-author Bill Forman, also of CfA. “It’s not that the galaxies have been compromised by close encounters, but instead they had some sort of arrested development.”

How can the mass of a black hole grow faster than the stellar mass of its host galaxy? The study’s authors suggest a large concentration of gas spinning slowly in the galactic center is what the black hole consumes very early in its history. It grows quickly, and as it grows, the amount of gas it can accrete, or swallow, increases along with the energy output from the accretion. After the black hole reaches a critical mass, outbursts powered by the continued consumption of gas prevent cooling and limit the production of new stars.

“It’s possible that the supermassive black hole reached a hefty size before there were many stars at all in the galaxy,” said Bogdan. “That is a significant change in our way of thinking about how galaxies and black holes evolve together.”

The results were presented June 11, 2012 at the 220th meeting of the American Astronomical Society in Anchorage, Alaska. The study also has been accepted for publication in The Astrophysical Journal.

The Chandra X-ray Observatory is part of NASA’s ﬂeet of “Great Observatories” along with the Hubble Space Telescope, the Spitizer Space Telescope and the now deorbited Compton Gamma Ray Observatory. Chandra allows scientists from around the world to obtain X-ray images of exotic environments to help understand the structure and evolution of the universe. The Chandra X-ray Observatory program is managed by NASA’s Marshall Center for the Science Mission Directorate, NASA Headquarters, Washington, D.C.

Featured image:  This image of the Pinwheel Galaxy, or also known as M101, combines data in the infrared, visible, ultraviolet and X-rays from four of NASA’s space-based telescopes. This multi-spectral view shows that both young and old stars are evenly distributed along M101’s tightly-wound spiral arms. Such composite images allow astronomers to see how features in one part of the spectrum match up with those seen in other parts. It is like seeing with a regular camera, an ultraviolet camera, night-vision goggles and X-ray vision, all at the same time. The Pinwheel Galaxy is in the constellation of Ursa Major (also known as the Big Dipper). It is about 70 percent larger than our own Milky Way Galaxy, with a diameter of about 170,000 light years, and sits at a distance of 21 million light years from Earth. This means that the light we’re seeing in this image left the Pinwheel Galaxy about 21 million years ago – many millions of years before humans ever walked the Earth. The hottest and most energetic areas in this composite image are shown in purple, where the Chandra X-ray Observatory observed the X-ray emission from exploded stars, million-degree gas, and material colliding around black holes. The red colors in the image show infrared light, as seen by the Spitzer Space Telescope. These areas show the heat emitted by dusty lanes in the galaxy, where stars are forming. The yellow component is visible light, observed by the Hubble Space Telescope. Most of this light comes from stars, and they trace the same spiral structure as the dust lanes seen in the infrared. The blue areas are ultraviolet light, given out by hot, young stars that formed about one million years ago, captured by the Galaxy Evolution Explorer (GALEX). Image credit: X-ray: NASA/CXC/SAO; IR & UV: NASA/JPL-Caltech; Optical: NASA/STScI Caption credit: Harvard-Smithsonian Center for Astrophysics