Solar eruptions are on the rise as the Sun progresses toward the peak of its roughly 11-year-long activity cycle, now expected in mid-2013. Sun produced powerful solar flare rated as X5.4  (based on the peak intensity of its X-rays) on March 7, 2012. During a powerful solar blast NASA’s Fermi Gamma-ray Space Telescope detected the highest-energy light ever associated with an eruption on the Sun. This X-class solar flare was the strongest eruption so far observed by Fermi’s Large Area Telescope (LAT). The solar flare produced an outpouring of gamma rays that the Sun briefly became the brightest object in the gamma-ray sky. 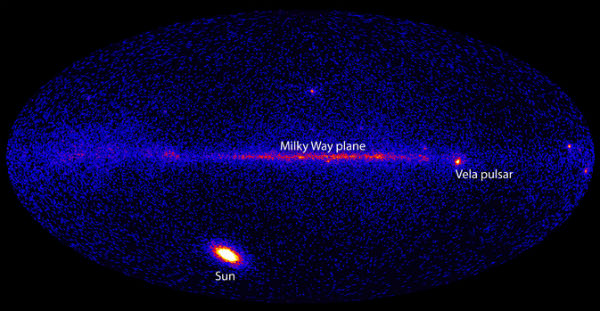 At the flare’s peak, the LAT detected gamma rays with two billion times the energy of visible light, or about four billion electron volts (GeV), easily setting a record for the highest-energy light ever detected during or immediately after a solar flare. The flux of high-energy gamma rays, defined as those with energies beyond 100 million electron volts (MeV), was 1,000 times greater than the sun’s steady output. Fermi’s LAT detected high-energy gamma rays for about 20 hours, two and a half times longer than any event on record. And thanks to the LAT’s angular resolution, the event marks the first time a greater-than-100-MeV gamma-ray source has been localized to the Sun’s disk. Fermi observations will give the ability to reconstruct the energies and types of particles that interact with the Sun during flares.

NASA’s Fermi Gamma-ray Space Telescope is now four years in orbit and its Large Area Telescope (LAT) is seeing the Sun as a faint, steady gamma-ray source thanks to the impacts of high-speed particles or cosmic rays. Fermi’s LAT scans the entire sky every 3 hours, looking for gamma rays with energies ranging from 20 MeV to more than 300 GeV. Its high sensitivity and wide field of view make the LAT an excellent tool for solar monitoring. Another Fermi instrument, the Gamma-ray Burst Monitor (GBM), observes the entire sky not blocked by the Earth at any given moment. Designed to detect light at energies from 8,000 eV to 40 MeV, the GBM’s complementary capabilities give scientists access to a lower, but overlapping energy range where solar phenomena produce interesting features. Both instruments observed a strong, but less powerful solar flare on June 12, 2010.

According to experts, the rise and fall of this brief flare in both instruments allowed them to determine that some of these particles were accelerated to two-thirds of the speed of light in as little as 3 seconds. Flares and other eruptive solar events produce gamma rays by accelerating charged particles, which then collide with matter in the sun’s atmosphere and visible surface.
NASA’s Fermi Gamma-ray Space Telescope is an astrophysics and particle physics partnership. Fermi is managed by NASA’s Goddard Space Flight Center, Greenbelt, Md. It was developed in collaboration with the U.S. Department of Energy, with contributions from academic institutions and partners in France, Germany, Italy, Japan, Sweden and the United States. 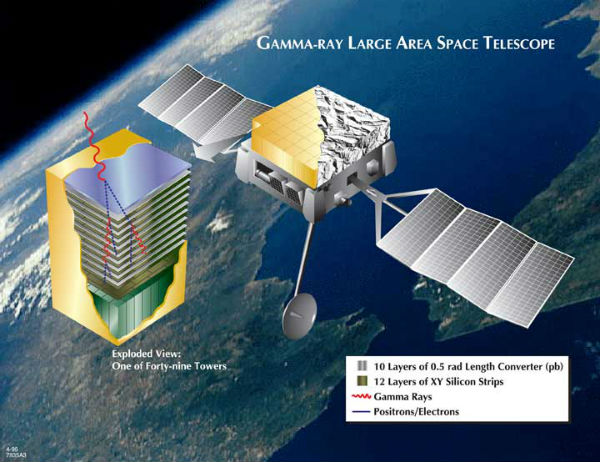 Fermi was launched on 11 June 2008 aboard a Delta II 7920-H rocket. The mission is a joint venture of NASA, the United States Department of Energy, and government agencies in France, Germany, Italy, Japan, and Sweden. The Large Area Telescope (LAT) is the principal scientific instrument on the Fermi Gamma Ray Space Telescope spacecraft. Originally called the Gamma-Ray Large Area Space Telescope (GLAST), the mission was renamed for the physicist Enrico Fermi. The Fermi spacecraft was launched into a near-earth orbit on 11 June 2008. The design life of the mission is 5 years and the goal for mission operations is 10 years. The Fermi LAT instrument collaboration is an international effort, funded by agencies in several countries.

The LAT is an imaging high-energy gamma-ray telescope covering the energy range from about 20 MeV to more than 300 GeV. Such gamma rays are emitted only in the most extreme conditions, by particles moving very nearly at the speed of light. The LAT’s field of view covers about 20% of the sky at any time, and it scans continuously, covering the whole sky every three hours.