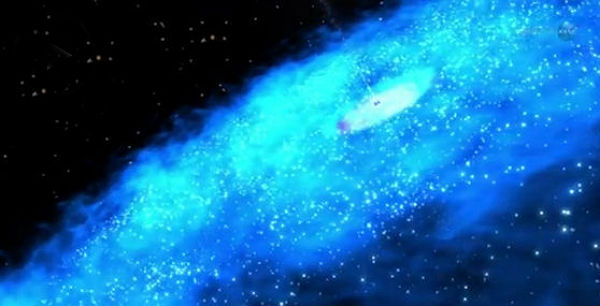 Each type of light, from radio waves to gamma-rays, reveals something unique about the universe and its electromagnetic spectrum. Some wavelengths are best for studying black holes; others reveal newborn stars and planets; while others illuminate the earliest years of cosmic history. NASA has many telescopes “working the wavelengths” up and down the electromagnetic spectrum.  Gamma rays are the highest-energy form of light known to us.

The Fermi Gamma-Ray Telescope orbiting Earth, has just crossed a new electromagnetic frontier and is picking up energetic photons. Scientists from NASA’s Goddard Space Flight Center have been able to produce the first all-sky map of the very high energy universe near the very edge of the electromagnetic spectrum, ranging between 10 billion and 100 billion electron volts. The light we see with human eyes consists of photons with energies in the range 2 to 3 electron volts. The gamma-rays Fermi detects are billions of times more energetic, from 20 million to more than 300 billion electron volts. These gamma-ray photons are so energetic, they cannot be guided by the mirrors and lenses found in ordinary telescopes.

Fermi was launched in June 2008. Before launching, there were only four known celestial sources of photons in this energy range and in three years Fermi has found almost 500 more

About a third of the new sources can’t be clearly linked to any of the known types of objects that produce gamma rays. For now, scientists have no idea what they are. One of the mysteries is giant bubble structures emanating from the Milky Way’s center and spanning some 20,000 light years above and below the galactic plane. And there are blazars – super massive black holes; the seething remnants of supernova explosions and pulsars – rapidly rotating neutron stars. 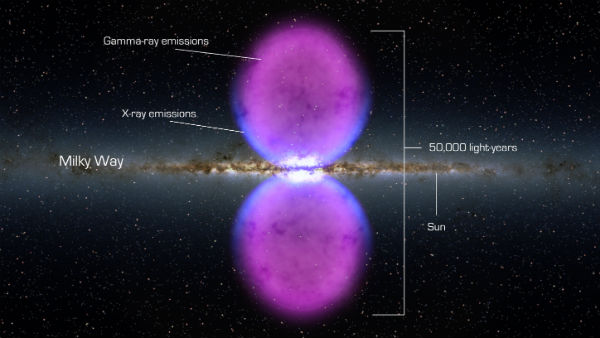 Fermi scans the entire sky every three hours, and as the mission continues and our exposure deepens, scientists can see the extreme universe in progressively greater detail. Now that the first sky map is complete, Fermi is working on another, more sensitive and detailed survey. In the next few years, Fermi should reveal something new about all of these phenomena, what makes them tick, and why they generate such ‘unearthly’ levels of energy. But for now, though, there are more unknowns than knowns about this new world.

Fermi is a powerful space observatory that will open a wide window on the universe. Gamma rays are the highest-energy form of light, and the gamma-ray sky is spectacularly different from the one we perceive with our own eyes. With a huge leap in all key capabilities, Fermi data will enable scientists to answer persistent questions across a broad range of topics, including supermassive black-hole systems, pulsars, the origin of cosmic rays, and searches for signals of new physics. The mission’s main instrument, the Large Area Telescope (LAT), is making pioneering observations of gamma-ray bursts at higher energies than ever before from space. Another instrument onboard, the Fermi Gamma-Ray Burst Monitor, is monitoring gamma-ray bursts at lower energies. The combination of the GBM and the LAT provides a powerful tool for studying GRBs over a very wide range of energies.

The mission is an astrophysics and particle physics partnership, developed by NASA in collaboration with the U.S. Department of Energy, along with important contributions from academic institutions and partners in France, Germany, Italy, Japan, Sweden, and the United States.