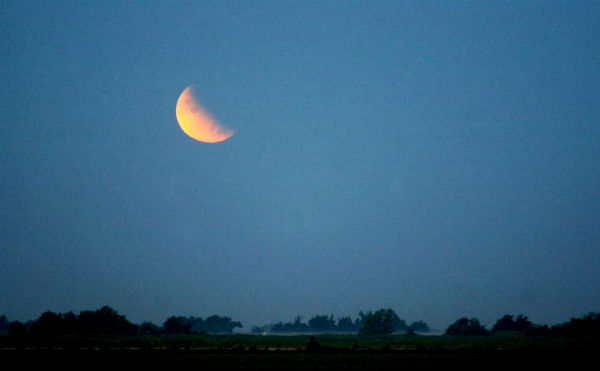 At 20:00 UTC (3:00 am Pacific Daylight Time), not long before sunrise on Monday, June 4th, the Moon passes directly behind our planet. Full Moon will fall under the shadow of Earth, producing the first lunar eclipse of 2012.  At maximum eclipse, around 21:00 UTC (4:04 am PDT), 37% of the Moon’s surface will be in the dark making that event a partial lunar eclipse. A broad stretch of lunar terrain around the southern crater Tycho will be covered by Earth’s shadow.

The eclipse will be visible in North and South America, Australia, eastern parts of Asia and all across the Pacific Ocean. On the Atlantic side of the United States, the eclipse occurs just as the Moon is setting in the west. Low-hanging Moons look unnaturally large when they beam through trees, buildings and other foreground objects. However, a low Moon is no wider than any other Moon. The eclipsed moon, hanging low in the west at daybreak on June 4th, will seem extra-large to US observers east of the Mississippi. The fact that the extra size is just an illusion in no way detracts from its visual appeal. 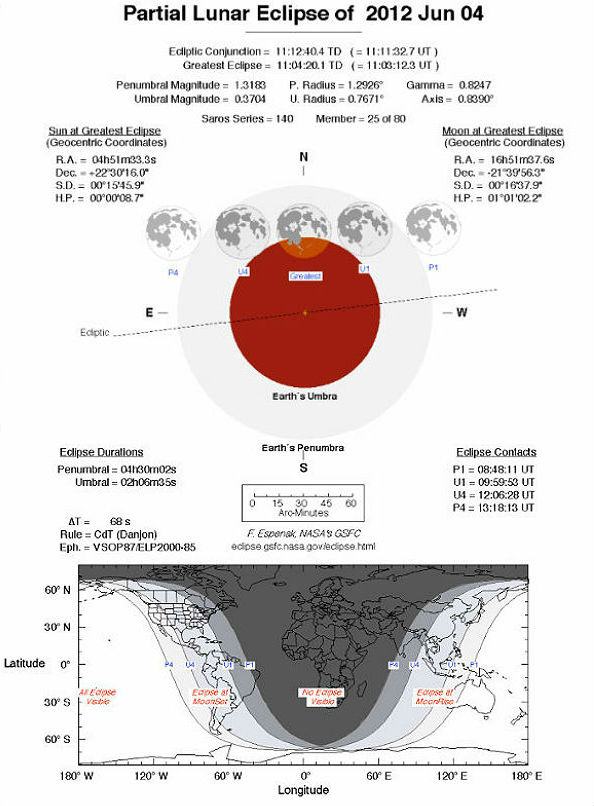 The Sun-Earth-Moon alignment that causes this eclipse is the second of three rapid-fire celestial line-ups. First there was the annular solar eclipse of May 20th, when the Moon moved between Earth and the sun to turn our star into a “ring of fire.”  The lunar eclipse of June 4th reverses the order of the Earth and moon, so that the moon is eclipsed instead of the sun. Finally, we have the transit of Venus on June 5th and 6th, when the second planet moves directly between the Earth and Sun.

So, don’t forget to wake up before dawn on June 4th and savor the partial lunar eclipse.