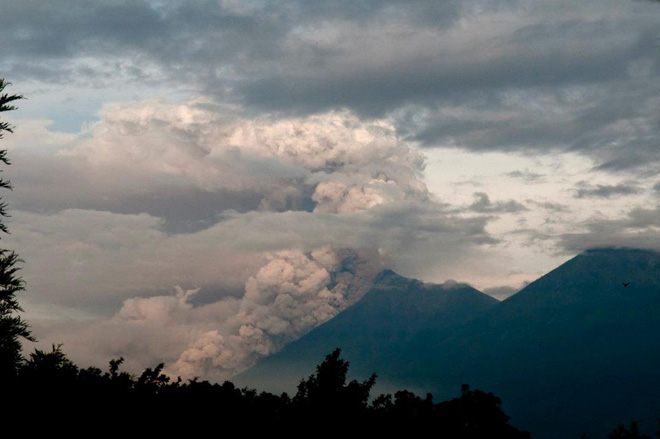 Fuego volcano in Guatemala had one of its most explosive and vigorous eruptions in years over the weekend.

The national emergency commission issued an advisory, warning planes not to fly within a 25-mile (40 kilometer) radius of the volcano.

Some of the video of the eruption clearly shows large incandescent blocks being thrown from the summit crater (see right) and the scene in the daytime is ash billowing. However, but Sunday morning, the activity had begun to diminish at Fuego, but ash was still falling on communities near the volcano with 700 meter / 2,300 ash plumes from smaller explosions.

The volcano was placed on “orange” alert status by CONRED (Coordinadora Nacional para la Reducción de Desastres) and the Guatemalan government has closed airspace in the 40 km surrounding the volcano, however no evacuations have been called. Although the activity is dominated by explosive activity, it appears that a lava flow that has reached at least 500 m / 1,600 feet was also seen and David de Leon from CONRED was quoted as saying the eruption was in an “effusive phase”. The threat of these lava flows has also prompted the closure of highways near the volcano.

This eruption at Fuego is part of activity that started in 2002, so we’re now at a full decade of intermittent explosive eruptions and lava flows from the volcano. INSIVUMEH, the geologic and meteorologic survey of Guatemala, has a live photo of Fuego that updates periodically, but as of this morning, cloud cover obscures much of the view.

Volcán Fuego, one of Central America’s most active volcanoes, is one of three large stratovolcanoes overlooking Guatemala’s former capital, Antigua. The scarp of an older edifice, Meseta, lies between 3763-m-high Fuego and its twin volcano to the north, Acatenango. Construction of Meseta volcano dates back to about 230,000 years and continued until the late Pleistocene or early Holocene. Collapse of Meseta volcano may have produced the massive Escuintla debris-avalanche deposit, which extends about 50 km onto the Pacific coastal plain. Growth of the modern Fuego volcano followed, continuing the southward migration of volcanism that began at Acatenango. In contrast to the mostly andesitic Acatenango volcano, eruptions at Fuego have become more mafic with time, and most historical activity has produced basaltic rocks. Frequent vigorous historical eruptions have been recorded at Fuego since the onset of the Spanish era in 1524, and have produced major ashfalls, along with occasional pyroclastic flows and lava flows.

Featured image: The eruption of Fuego in Guatemala seen on May 19, 2012. Ash is seen coming from the vent, 300 meter below the summit. Possible small pyroclastic flows are also visible on the flanks of the volcano. Image courtesy of CONRED.