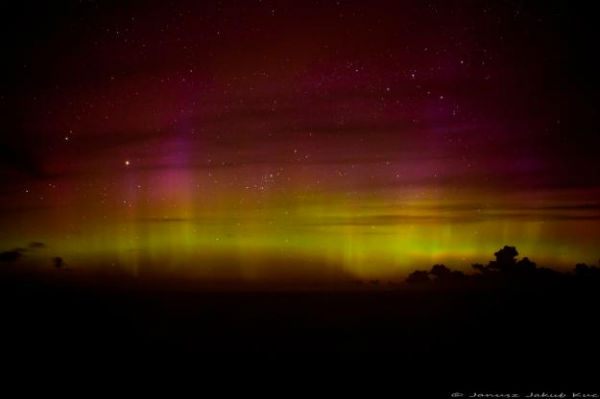 For more than a week, solar activity has been low. Today, around 0600 UT, an active region on the farside of the sun broke the calm with a powerful eruption. NASA’s Solar Dynamics Observatory recorded a massive cloud of plasma flying over the southwestern limb:

Solar activity is currently at very low levels. Sunspot 1460 just rotated onto the western limb and out of direct Earth view. Sunspot 1459 which continues to decay, will also join 1460 on the limb by the weekend. Elsewhere, Sunspot 1465 did have a Beta-Gamma-Delta magnetic configuration, but has itself decayed and is no longer a threat for strong solar flares. There will continue to be a chance for C-Class flares.

There are no large coronal holes on the Earthside of the sun. The southwest limb is seething with activity. Two Coronal Mass Ejections were seen billowing away from the Sun earlier today. This movie bellow shows large prominences in action.

The Geomagnetic Storming over the past several days produced some brilliant Aurora over many parts of North America. Earth’s magnetic field is reverberating from three days of buffeting by a high-speed solar wind stream. Since April 23rd, auroras have been photographed in more than a dozen US states including Michigan, Nebraska, Kansas, Wisconsin, North Dakota, South Dakota, Iowa, Illinois, Minnesota, Colorado, Washington and Alaska. 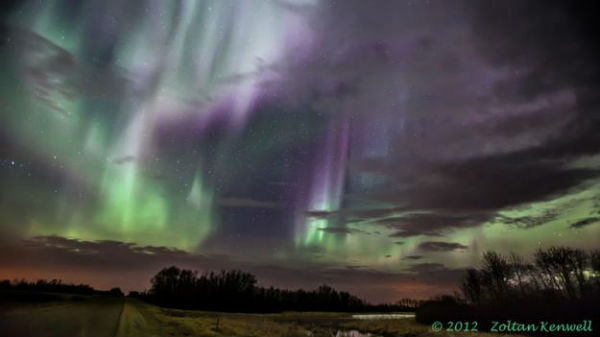 More auroras may be in the offing. A minor CME is en route to Earth, due to arrive on April 26/27. The impact of the cloud will add to the ongoing effect of the solar wind, boosting the chances of another display. NOAA forecasters estimate a 20% to 30% chance of geomagnetic storms during the next 24 hours.

The geomagnetic field started the period at minor storm levels, but fell to quiet levels and remained mostly quiet for the remainder of the period. This activity was attributed to Coronal Hole High Speed Stream (CH HSS) effects. Solar wind speeds have steadily decreased from approximately 730 km/s to approximately 560 km/s. The Bz component of the interplanetary magnetic field has remained fairly neutral with minor fluctuations between +3 and -5 nT. Overall, the total field fluctuated between +2 and +8 nT. The greater than 2 MeV electron flux at geosynchronous orbit was at high levels throughout the period.

The geomagnetic field is expected to be at quiet to unsettled levels with isolated active periods for day one (27 April) as CH HSS effects begin to wane. Days two and three (28 -29 April) are expected to be mostly quiet.