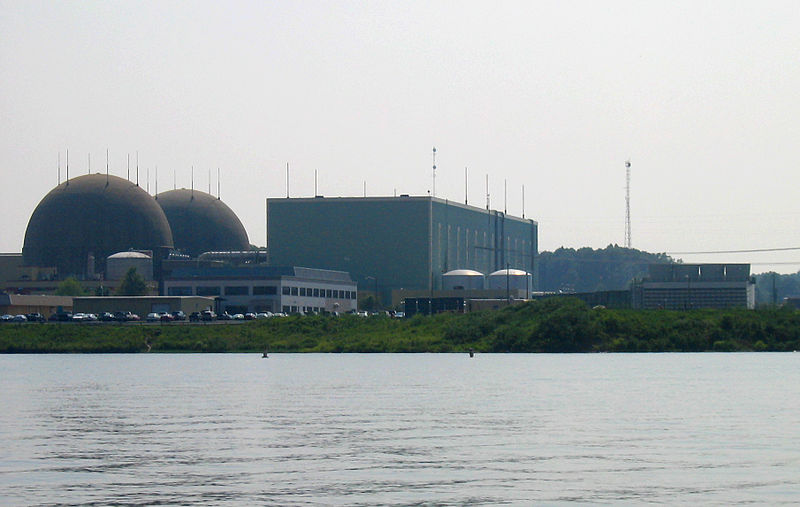 Dominion Virginia Power has found elevated levels of a weak form of radioactivity in a sampling well at its North Anna nuclear power station. On Friday, the Richmond-based utility was notified by its laboratory contractor that water taken from an on-site groundwater sampling point contained an unusually high level of tritium — more than twice the EPA’s standard for drinking water.

The radiation poses no hazard to the public, the Nuclear Regulatory Commission said. “At this point, I don’t think there’s any concern on the NRC’s part that it would affect (nearby Lake Anna) or drinking water supplies,” said Roger Hannah, a spokesman for the federal regulatory agency’s Atlanta office.

Dominion Virginia Power is not sure where the radioactivity is leaking from, but the two reactors at the Louisa County plant are not the source, company spokesman Rick Zuercher said.

The company said it has been working to find and fix potential sources of the escaping tritium and that the contaminated water is not leaking off-site.

“There is no evidence that the increased concentration of tritium we sampled was related to the earthquake” on Aug. 23, which shut down the plant for nearly three months, the company told the NRC on Tuesday. “Monitoring of the sample points both inside and outside the protected area and a post-seismic hydrogeological evaluation show this to be the case.”

However, one anti-nuclear group was skeptical of Dominion Virginia Power’s and the NRC’s efforts to solve the leak issue. “We remain concerned about the inaccessible piping systems that carry radioactive water,” said Paul Gunter with Beyond Nuclear, which is based in Maryland. “The industry and the NRC are basically groping in the dark to find these leaks.”

Tritium is a naturally occurring radioactive form of hydrogen, but it also is produced as a byproduct of the nuclear reactions in power plants like North Anna. Tritium emits a weak form of radiation, the NRC said. Because it is produced by cosmic rays colliding with air in the atmosphere, the federal agency said, tritium is found in very small or trace amounts in groundwater throughout the world. Exposure to radiation can have adverse health effects. For instance, radiation doses can increase the chance of getting cancer and causing genetic abnormalities in future generations.  (Source: RSOE EDIS)

At 1:51pm on August 23, 2011, a 5.8 magnitude earthquake occurred, centered south of Mineral, Virginia, and, 11 miles from the North Anna Nuclear Station. The Associated Press reported the quake “was felt as far north as Rhode Island, New York City and Martha’s Vineyard, Mass.” The reactors automatically shut down and, because of a loss of offsite power, four diesel generators started up to supply electricity to safety systems. The plant reported an “Alert” status, the second lowest level of four NRC emergency classifications, until 11:16am on August, 24, 2011. One of the generators suffered a coolant leak and stopped working. A fifth standby generator was activated to replace the broken unit, which was repaired. Offsite power was restored later on August 23. Dominion also reported that the aftershocks did not affect the power plant. Also on August 24, Dominion announced that it had ended the “Notice of Unusual Event”, the least serious of the NRC emergency classifications, at the North Anna Power Station following inspection of equipment susceptible to seismic activity.

The Nuclear Regulatory Commission’s estimate of the risk each year of an earthquake intense enough to cause core damage to the reactor at North Anna was 1 in 22,727, according to an NRC study published in August 2010.

During the construction of original nuclear reactors at North Anna, the utility learned of the existence of fault lines within the construction site of the proposed plants from its outside independent engineering firm, Stone & Webster, who had been hired by the utility to access the proposed nuclear plant locations. The utility was fined $32,000.00 by the government for concealing this information.

According to the Huffington Post, 1977 Justice Department memo “..focused on how the power company and federal regulatory officials went to efforts to not make public the knowledge of geologic faulting at North Anna. “Virtually the entire Office of Regulation of the

According to local Virginia media station, WHSV, “The two North Anna reactors are among 27 in the eastern and central U.S. that may need upgrades because those plants are more likely to get hit with an earthquake larger than the one on which their design was based, according to a preliminary Nuclear Regulatory Commission review.” The Nuclear Regulatory Commission extended the operating licenses of these plants for an additional 20 years back in 2003. Dominion has publicly stated that on-site, spent-nuclear-fuel long-term storage canisters shifted during the earthquake along with various building cracks, all while maintaining such damage does not represent unsafe operating conditions. As of December 20, 2011, both units at North Anna Power Station have restarted, and are operating at full power. (Source)