In the middle of the night on February 13th, something disturbed the animal population of rural Portal, Georgia. Cows started mooing anxiously and local dogs howled at the sky. The cause of the commotion was a rock from space.

“At 1:43 AM Eastern, I witnessed an amazing fireball,” reports Portal resident Henry Strickland. “It was very large and lit up half the sky as it fragmented. The event set dogs barking and upset cattle, which began to make excited sounds. I regret I didn’t have a camera; it lasted nearly 6 seconds.”

Strickland witnessed one of the unusual “Fireballs of February.”

“This month, some big space rocks have been hitting Earth’s atmosphere,” says Bill Cooke of NASA’s Meteoroid Environment Office. “There have been five or six notable fireballs that might have dropped meteorites around the United States.”

It’s not the number of fireballs that has researchers puzzled. So far, fireball counts in February 2012 are about normal. Instead, it’s the appearance and trajectory of the fireballs that sets them apart.

“These fireballs are particularly slow and penetrating,” explains meteor expert Peter Brown, a physics professor at the University of Western Ontario. “They hit the top of the atmosphere moving slower than 15 km/s, decelerate rapidly, and make it to within 50 km of Earth’s surface.”

The action began on the evening of February 1st when a fireball over central Texas wowed thousands of onlookers in the Dallas-Fort Worth area.

The fireball was bright enough to be seen on NASA cameras located in New Mexico more than 500 miles away. “It was about as bright as the full Moon,” says Cooke. Based on the NASA imagery and other observations, Cooke estimates that the object was 1 to 2 meters in diameter.

According to the American Meteor Society, fireballs are very bright meteors, about as bright as Venus in the morning and evening skies. About 10 to 15 meteorites fall to Earth each day, but sighting are rare since streaking fireballs often fall over the ocean, or during daylight hours when they can’t be seen.

Fireballs are sometimes accompanied by sonic booms, as happened in Texas on Feb. 3rd 2012.

So far in February, NASA’s All-Sky Fireball Network has photographed about a half a dozen bright meteors that belong to this oddball category. They range in size from basketballs to buses, and all share the same slow entry speed and deep atmospheric penetration. Cooke has analyzed their orbits and come to a surprising conclusion:

This isn’t the first time sky watchers have noticed odd fireballs in February. In fact, the “Fireballs of February” are a bit of a legend in meteor circles.

Brown explains: “Back in the 1960s and 70s, amateur astronomers noticed an increase in the number of bright, sound-producing deep-penetrating fireballs during the month of February. The numbers seemed significant, especially when you consider that there are few people outside at night in winter. Follow-up studies in the late 1980s suggested no big increase in the rate of Fireballs of February. Nevertheless, we’ve always wondered if something was going on.”

Indeed, a 1990 study by astronomer Ian Holliday suggests that the ‘Fireballs of February’ are real. He analyzed photographic records of about a thousand fireballs from the 1970s and 80s and found evidence for a fireball stream intersecting Earth’s orbit in February. He also found signs of fireball streams in late summer and fall. The results are controversial, however. Even Halliday recognized some big statistical uncertainties in his results. 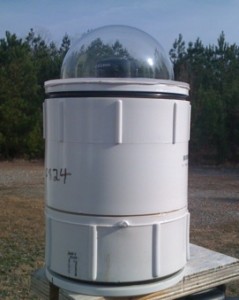 The NASA All-sky Fireball Network (website) is a network of cameras set up by the NASA Meteoroid Environment Office (MEO) with the goal of observing meteors brighter than the planet Venus, which are called fireballs.  The collected data will be used by the MEO in constructing models of the meteoroid environment, which are important to spacecraft designers.

The network currently consists of 6 cameras, 4 of which are placed in locations in north Alabama, northwest Georgia, and southern Tennessee.  The remaining 2 are located in southern New Mexico. The network is growing all the time, with plans to place a total of 15 cameras in schools, science centers, and planetaria in the United States, predominately east of the Mississippi River, where there are few such systems.

NASA’s growing network could end up solving the mystery of “Fireballs of February”. Cooke and colleagues are adding cameras all the time, spreading the network’s coverage across North America for a dense, uninterrupted sampling of the night sky.

“The beauty of our smart multi-camera system,” notes Cooke, “is that it measures orbits almost instantly. We know right away when a fireball flurry is underway—and we can tell where the meteoroids came from.” This kind of instant data is almost unprecedented in meteor science, and promises new insights into the origin of February’s fireballs.

Meanwhile, the month isn’t over yet. “If the cows and dogs start raising a ruckus tonight,” advises Cooke, “go out and take a look.”