Gamburtsev Mountains (East Antarctic) are the most unique of all mounatins on Earth because they lie below the surface of the Earth! Valleys dotted with an interconnected lake system and a sheet of Antarctic ice is without doubt the most peculiar mountain system ever discovered on our planet. Although they were uncovered by a Russian seismic survey in 1950, research work was very limited until University of Columbia geophysicist Robin Bell studied mountains and revealed some fascinating news including the obfuscated origin of this range.

During the International Polar Year, seven nations pooled their resources to carry out the AGAP project aimed at understanding how youthful looking mountains could have formed in the middle of an apparently stable Precambrian craton. These mountains are as large as the European Alps, boasting heights of over 3,000 meters and an expanse of 1,200 km, yet researchers know almost nothing more about them. Latest aerogeophysical results indicate that a unique combination of processes led to the formation and uplift of the Gamburtsevs mountains which are buried under nearly a mile and a half of ice.

Nearby rocks suggest they are quite ancient, but their steep, rugged shapes, which resemble the Alps, are what one would expect of young mountains. About a billion years ago a thick root formed beneath the Gamburtsev Province as a mosaic of plates collided to form the core of East Antarctica. One of largest rift systems in the world that extends for over 3,000 km from India to central East Antarctica provided the tectonic trigger to uplift the Gamburtsev Mountains in two phases about 250 and 100 Ma ago. The billion-year-old root was rejuvaneted during the rifting processes and helped uplift the range. Finally, fluvial and glacial erosion cut deep valleys and helped uplift the peaks prior to 14 Ma ago. 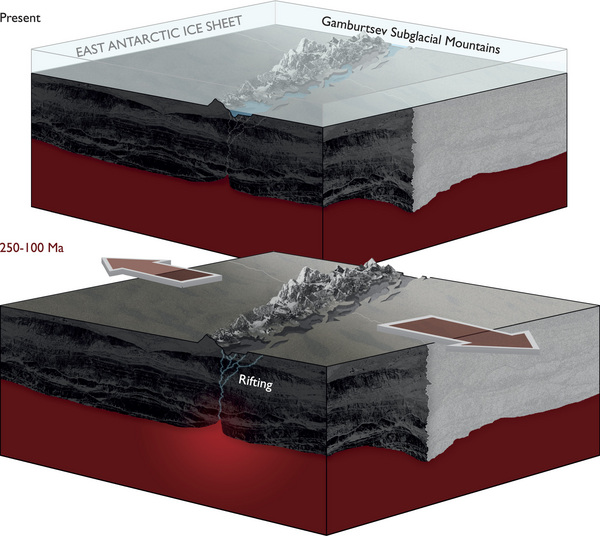 Researchers flew approximately 74,500 miles (120,000 kilometers) with two aircraft equipped with ice-penetrating radars, lasers and magnetic and gravity meters to collect new data from the Gamburtsev region, to learn more about their mysterious origins. Magnetic anomalies seen throughout the Gamburtsevs match those of approximately 1-billion-year-old rocks seen to the north, ones predating the evolution of animals and plants on Earth. This evidence suggests the root of this mountain range was born around that time from collisions of several continents or microcontinents, findings are corroborated by gravity and other data.

Until recently, researchers have assumed the vast majority of the ice that makes up ice sheets forms as snowflakes compact over millions of years. To image the ice below the frigid surface, scientists used two Twin Otter aircraft equipped with ice-penetrating radars, laser ranging systems, gravity meters, and sensors that measure magnetic fields. The planes scanned the surface in north-south flights spaced 5 kilometers apart, crossing in east-west lines every 33 kilometers.

Previous studies have found temperatures below the ice sheet, caused by the warmth of the planet below, that could melt water. But scientists thought there was much less meltwater, playing a far less important role in ice sheet structure, than the new work suggests. 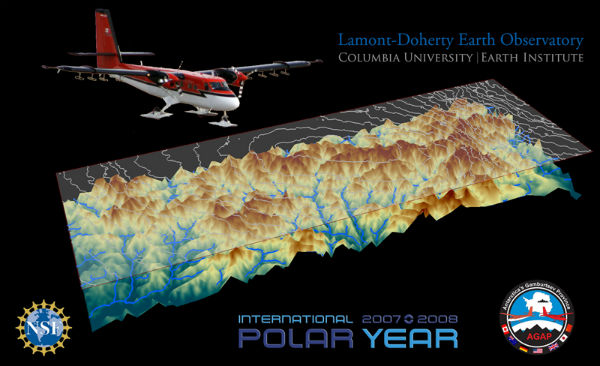 The Great Flood detailed in Genesis, which was powerful enough to cause such land mass formations, provides a possible answer to this mystery. Considerable creation science research has already been conducted regarding the formation of mountains in general, the Earth’s past Ice Age, and the Earth’s present ice caps. According to the creation model, the Flood deposited extensive amounts of sediment. While still soft, the sediments were deformed and uplifted, and water running off the continents carved further mountains.
This research is an important contribution to our understanding of Antarctic tectonics with a number of important wider implications, such as deciphering mountain-building processes in continental interiors and their effects.

“The next step will be to assemble a team to drill through the ice into the mountains to obtain the first rock samples from the Gamburtsevs.  Amazingly, we have samples of the moon but none of the Gamburtsevs. With these rock samples, we will be able to constrain when this ancient piece of crust was rejuvenated and grew to a magnificent mountain range.” researcher Robin Bell of Columbia University’s Lamont-Doherty Earth Observatory.