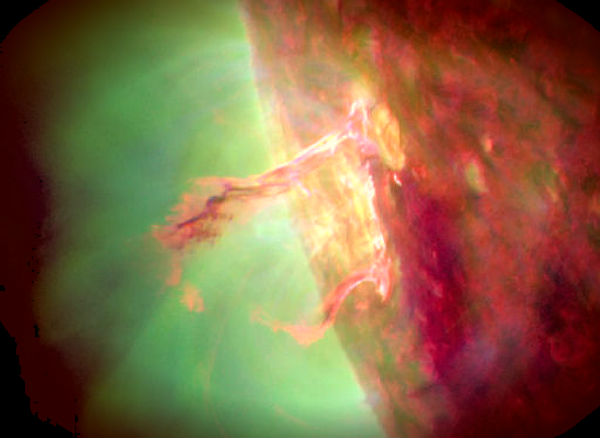 Sunspot 1387 produced another M-Class flare, this time peaking at M1.5. This latest solar flare took place at 02:27 UTC Monday morning and indicates the potential for bigger things to come.


New sunspot 1387 erupted during the late hours of Christmas Day, producing an M4-class flare and hurling a CME toward Earth and Mars. The CME is expected to deliver a glancing blow to Earth’s magnetic field on Dec. 28th at 1200 UTC and a direct hit to the planet Mars on Dec. 30th at 1800 UTC. 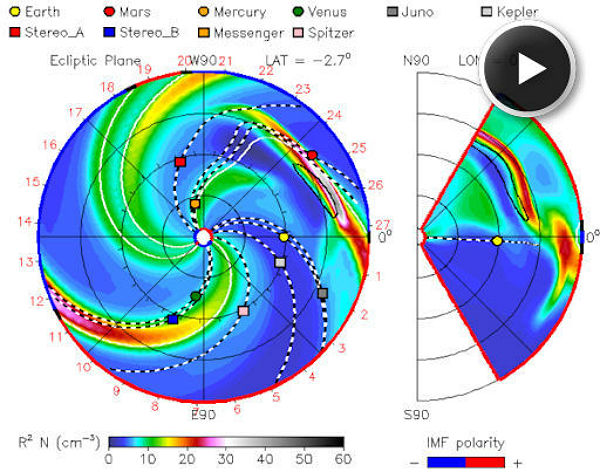 Using onboard radiation sensors, NASA’s Curiosity rover might be able to sense the CME when it passes the rover’s spacecraft en route to Mars. Here on Earth, NOAA forecasters estimate a 30-to-40% chance of geomagnetic storms on Dec. 28th when the CME and an incoming solar wind stream (unrelated to the CME) could arrive in quick succession. High-latitude sky watchers should be alert for auroras on Wednesday night.

One of the most beautiful eruptions of the young solar cycle occured just this past weekend. 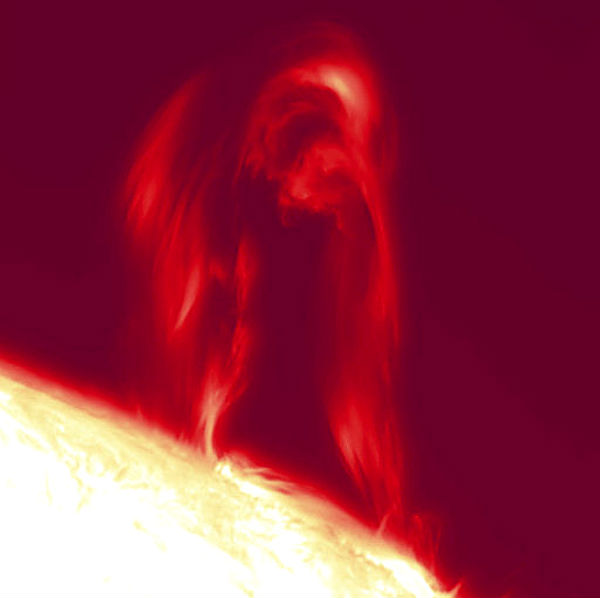 NASA’s Solar Dynamics Observatory was recording the blast from Earth-orbit (watch it). This explosion was not Earth-directed. Next time, however, could be different. The source of the blast, sunspot 1386, is turning toward Earth, increasing the chances of a geoeffective flare in the days ahead. (SpaceWeather)

Christmas began with a pair of magnetic filaments erupting in the sun’s northern hemisphere followed by a sequence of C-flares from sunspot 1385 in the sun’s southern hemisphere. Both halves of the sun are rocking on Christmas. Coronagraph images from SOHO and the twin STEREO probes suggest a possible Earth-directed CME. (SDO movie)

The new Sunspot group re-emerging in the southern hemisphere near old region 1380 (now re-numbered 1387) produced a moderate Solar Flare reaching M4.0 on Sunday afternoon at 18:16 UTC. A bright Coronal Mass Ejection (CME) looks to have resulted and it may be partially Earth Directed.

Solar activity increased to moderate levels with numberous C-Class flares and an M4.0 S/F around new Sunspot 1387. This sunspot group formed quickly in place of old region 1380 which previously faded away. There will be a good chance for further M-Class flares around this region and a very low threat of an X-Class event. (SolarHam)

Solar activity was moderate. New Region 1387 (S22W28) produced a M4/1N flare at 25/1816Z. This event was accompanied by Type II (1019 km/s) and Type IV radio emissions. This region grew rapidly, ending the period as a Dao type group with Beta magnetic characteristics. Coronagraph imagery was not yet available to determine the characteristics of the CME.

Earlier in the period, a filament eruption occurred near N21W15. Analysis of this event using LASCO imagery indicated a speed near 400 km/s. Evaluation of the geoeffective potential of both the flare and filament eruption is ongoing. Solar activity is expected to be moderate, with a chance for further M-class activity from Region 1387.

The geomagnetic field was quiet. An enhancement of the 10 MeV proton flux at the ACE spacecraft was observed following the M4/1N flare mentioned earlier. The geomagnetic field is expected to be mosly quiet on Days 1 and 2 (26-27 December). Initial predictions are for the CME to arrive late on Day 3 (28 December), bringing unsettled to active levels with a slight chance for minor storm conditions at high latitudes. The arrival estimate will be refined as new data becomes available.