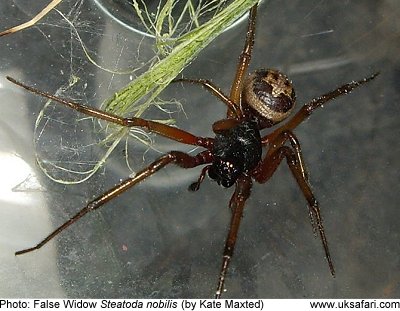 We have just had false black widow spiders confimed in our home but I have also found them in the shed, outbuildings and even polytunnel, a concerned citizen from South Wales, UK, warns her fellow citizens and continues our local authority have said due to climate change they are everywhere now but wont record it due to negative impact on tourism trade.

I have been told to vacuum and be careful of my children getting bitten.  I am angry this is being kept quiet as their bite is painful and they jump at you if disturbed which is how I found them! 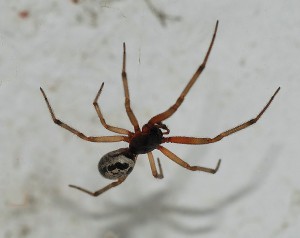 Steatoda nobilis, commonly known in England as the biting spider or the false widow, is a common species of spider in the genus Steatoda. As one of this spider’s common name indicates, the spider superficially resembles, and is frequently confused for, the black widow and other venomous spiders in the genus Latrodectus. The spider is native to the Canary Islands but arrived in England in around 1870 through bananas sent to Torquay. In England it has a reputation as one of the few local spider species which is capable of inflicting a painful bite to humans – although this is a comparatively rare occurrence.

According to Stuart Hine, an insect expert at the Natural History Museum, the species is  spreading rapidly.

The truth is that Steatoda nobilis is increasing its range and it will become more common unless the UK climate reverts again to more severe winters, which doesn’t seem likely.

The facts are that of 640 UK spider species only 12 are recorded as having bitten humans and they tend to be larger species, Tegenaria spp, Amaurobius spp, Nuctenea umbratica, and native Steatoda, S. grossa in particular. Generally speaking the effects of bites/invenonmations are paltry, though shocking for the victim. But of course each individual reacts slightly differently and some more severely. (Naturenet.net)

Brown house or false widow spiders – Steatoda grossa in Australia and Steatoda nobilis in the UK, have caused mild neurotoxic arachnidism and, in the case of the former, have been treated successfully with redback antivenom.

The story of this spider as the UK’s most dangerous spider was first mass publicized in 2006 by Telegraph.co.uk and was republished in 2008 by Dailymail.co.uk. Mr. Hines words as they appear in those articles were debunked in 2007 at Naturenet.net  where he apparently wrote reply and stated what he actually said.

Through my day job, Manager of Insect Information Service (Natural History Museum) I am aware of about 12 confirmed (we have formally identified the spider) cases of S. nobilis bite in the last 8 years (interestingly we never recorded this species as an enquiry pre 1999, and numbers have risen each year since). I have received two this year already, with accompanying spiders. (one enormous female from the Isle of Wight – that was the gardening glove incident and I never warned gardeners to check their gloves and generally begin to panic). In both cases the ‘victim’ (sounds a bit extreme doesn’t it) described a numbness and pain that radiated from finger tip to shoulder and lasted for several hours. However, I am sure that this is as severe as it would get and many people get bitten and barely notice it.

Of course I also explain the great value of spiders and how rare the event of spider bite in the UK actually is. I also always explain that up to 12 people die from wasp/bee stings in the UK each year and we do not panic so much about wasps and bees – but this never makes it past editing.

Still I could go on, they do bite, people have experienced severe-ish reactions, it is generally nothing to worry about and spiders are of great environmental importance and are really rather beautiful and very interesting.

TheHuffingtonpost.co.uk reported last month that the nest of this venomous spider has been found in a Buckinghamshire garden. Local pest controllers have dealt with the nest, but council officers warned Bletchley residents that there may be more.

The spiders’ bite is not lethal, but is painful, according to local experts. Liam Mooney from Milton Keynes Council told the BBC: “The spiders have larger fangs than other species and venom behind them. The bite is worse than a wasp sting”.

They are known to live in Britain, unlike the actual black widow species. They tend to live along the coastal areas of southern England and in London. The spiders are related to the black widow, but do not have the distinctive red spot on their backs. They make similar “tangle” webs, which are full of eggs. This means that there are likely to be many spiders in the same small area.

Mothers view on the subject of false black widow bites

Our reader continues with this concerning words:

My view as mother is that being informed is paramount to be prepared. If you know the danger to yourself and your children you can avoid it as best as possible, we must have been living with these for many months completely unaware of the potential danger these spiders represent to us all with young children including 10 week old baby sleeping here its a real worry. What if they were bitten? I would not have attributed it to a spider. Until yesterday I had always taught my children that spiders were harmless and frequently scooped them up in my hand to put outside. We need to know that false widow spiders are here in the UK , in our homes, gardens, workplaces and beyond.

Ways to control spiders in your home and workplace