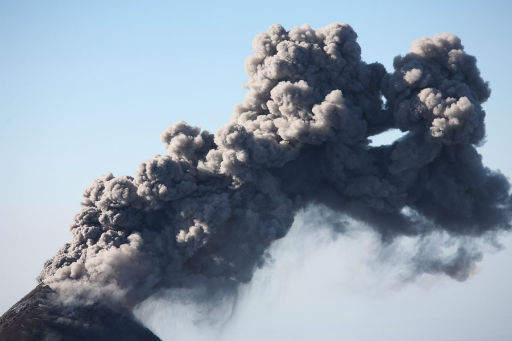 The Guatemalan geophysical survey SERNAGEOMIN reports increasing explosive activity from Fuego volcano, one of the country’s most active volcanoes. Fuego was observed producing ash clouds reaching 1500-2000 m above the summit crater (at ca. 3600 m altitude) which drifted SW and reached up to 20 km distance where they produced some ash fall, reported in the communities of Panimaché, Morelia, Sangre de Cristo, and Santa Sofía.

The explosions were accompanied by moderate to strong booming noises and shock waves that could be felt in up to 15 km distance. Near-constant rock avalanches are observed on the upper slopes beneath the summit crater, some of which reach the vegetated areas. (RSOE EDIS) 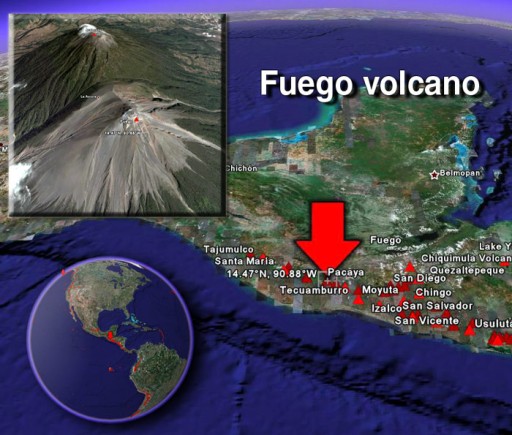 INSIVUMEH reported that activity at Fuego increased during 8-9 November. Explosions produced shock waves that were detected up to 15 km away, rumbling sounds, and ash plumes that rose 1.5-2 km above the crater and drifted 20 km SW. Ash fell on the SW flank in Panimaché (6 km SW), Morelia (7 km SW), Sangre de Cristo (8 km WSW), and Santa Sofía. Block avalanches descended the flanks. During 9-10 November explosions generated ash plumes that rose 600-800 m above the crater and drifted 10 km S and SW. Avalanches descended the SW flank towards the Taniluya and Ceniza drainages. (INSIVUMEH November 2011 bulletin)

The Cakchiquel Mayans call this volcano “Chi Gag”. Fuego is almost an identical twin of Acatenango. Fuego is very interesting to scientists because it has been in almost constant eruption since 1524 (over 400 years) with numerous large explosive eruptions and frequent earthquakes. The last big eruption was in 1974. During a big eruption, ash from Fuego falls as far as El Salvador and Honduras. (MayaParadise) 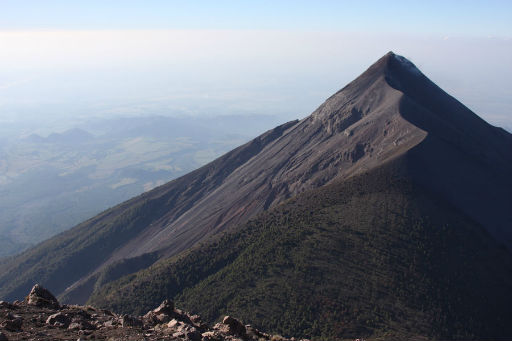 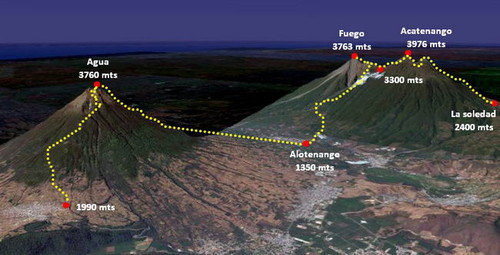 Fuego volcano is located 13km W of Antigua, the former capital and touristic center of Guatemala. The volcano is frequently active, displaying explosive strombolian and vulcanian activity. This can be accompanied by lava flows and pyroclastic flows. Fuego forms part of a large volcanic complex which includes Yepocapa (3880m), Acatenango (3976m), Meseta (3600m) and Fuego (3763m). Yepocapa itself nests on the remains of Acatenango Antiguo, while Fuego and Meseta share a common magma source, Acatenango and Yepocapa are fed by a distinct system and thus represent a distinct volcanic unit. 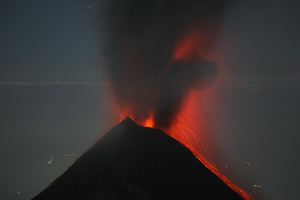 Volcanism at Fuego has been primarily basaltic in historical times. This is thought to result from high input rates of mafic (<55% silica) magmas into the subvolcanic magma chamber. Studies on strata from the Meseta collapse scar and comparison thereof with young Fuego eruptates have revealed several interesting trends in activity at the volcano. t is suggested that increased influx of mafic magma into the system resulted in progressively more mafic lavas. It is possible that increased magma input into the N-S trending dyke system thought to connect the underlying magma chamber with the vent played a role in triggering failure of the E flank resulting in the Escuintla debris avalanche. Magma pressure in a N-W oriented dyke will push E and W flanks apart. It is interesting that the basaltic lavas presently erupted from Fuego are similar in composition to the last eruptives from Meseta. Further, Fuego’s E flank is hydrothermally weakened and steep, suggesting that it may be prone to failure.

More than 60 eruptions have been documented from Fuego since 1524. Most were short-lived vulcanian explosive eruptions accompanied by ashfall, pyroclastic flows and later lahars. About 25% of these eruptions are reported to have involved lava flows. Clusters of historic eruptions lasting 20-70 years, seperated by relatively quiet periods of 80-170 years have been defined. These may coincide with the arrival of batches of magma into the shallow magma chamber from a far deeper source.

The last “major” eruption occurred in 1974 when 0.1 cubic km of magma was erupted in essentially 4 main bursts. On 14, 17, 15 and 23 October, a series of powerful blasts produced up to 10km high ash columns and pyroclastic flows in 6 drainages to the E, W and SW. The longest flows reached over 10km from the summit but were fortunately restrained in uninhabited valleys. A 30cm layer of ash was deposited 10km to the W by the first burst, the second was even more powerful. Many thousands temporarily abandoned their homes due to the eruption. Roofs collapsed under the weight of the ash and crops and grazing areas were destroyed over a wide area extending up to 100km downwind. Many who initially stayed to sweep their roofs left after larger ballistics fell (10cm long ballistics were thrown over 5km from the crater).

Further smaller eruptions occurred in subsequent years. Fuego was then essentially quiet from 1987 to 1999. Since then, the volcano has once again been in a period of heightened activity. Most commonly, sporadic small strombolian or vulcanian eruptions can be witnessed producing ash clouds. Events may be anything from minutes to days apart. Lava flows have also been seen in recent years. These tend to break up easily on the steep flanks causing incandescent rockfalls and small pyroclastic flows. At night, incandescence can often be observed in the base of eruption columns. The eruption photos in the present report were taken in Dec. 07 and Jan. 08 and reflect a period of sporadic yet slightly above average activity. Unusually harsh weather conditions unfortunately hampered observation somewhat. (PhotoVulcanica)

There are hundreds of ancient volcanic vents and sites of past volcanic activity in Guatemala but only some 35 of these are officially recognized as “volcanoes”. Most active volcanoes in the Mexico/Central American Region occur in belts produced by subduction of Pacific oceanic crust beneath the southern edge of the North American Plate and the western edge of the Caribbean Plate. Large stratovolcanoes and silicic calderas are found here, but the region also contains many basaltic volcanic fields, particularly in the central valley of Mexico and along the Guatemala-El Salvador border.

A few other active volcanoes in northern Mexico are related to extensional tectonics of the Basin and Range Province, which split the Baja California peninsula from the mainland. …The explosive eruption of Guatemala’s Santa Maria volcano in 1902 was one of the world’s largest 20th-century eruptions. …Volcanism in Guatemala results from subduction of the Cocos plate beneath the Caribbean plate. (GoToGuatemala)

The Central America Volcanic Arc (often abbreviated to CAVA) is a chain of volcanoes which extends parallel to the Pacific coast line of theCentral American Isthmus, from Guatemala, El Salvador, Honduras, Nicaragua, Costa Rica and down to northern Panama. This volcanic arc, which has a length of 1500 km, <1 > <2 > is formed by an active subduction zone along the western boundary of the Caribbean Plate.

The Central America Volcanic Arc includes hundreds of volcanic formations, ranging from major stratovolcanoes, to lava domes and cinder cones. Some of these have produced large explosive eruptions, like the colossal VEI 6 eruption of the Santa Maria volcano in 1902. Central America’s highest volcanoes are found in Guatemala and include the Tajumulco and Tacaná, both above 4,000 meters. Several volcanoes in Central America are currently active, including Arenal, Turrialba, Irazú, Poás in Costa Rica; Cerro Negro, San Cristóbal, Concepción in Nicaragua; San Miguel, Santa Ana, Izalco in El Salvador; Santa Maria/Santiaguito, Pacaya, Fuego in Guatemala. (Wikipedia) 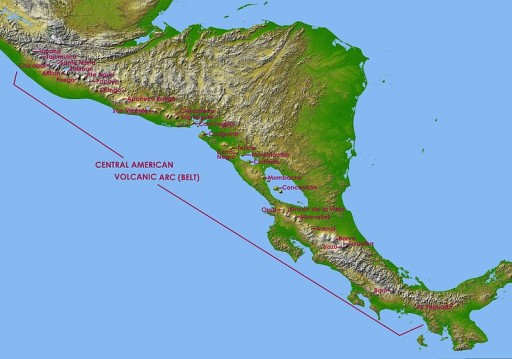