USGS PAGER issued the yellow alert level for economic loses (Some damage is possible and the impact should be relatively localized. Estimated economic losses are less than 1% of GDP of the United States. Past events with this alert level have required a local or regional level response. Green alert level for shaking-related fatalities. There is a low likelihood of casualties. )

The 5.6-magnitude earthquake has caused significant damage to the southern parts of Lincoln County. Kjrh.com reports that the air conditioning ducts of the Prague Library have broke through the ceiling. The Lincoln County Emergency Management officials have reported that chimneys have crashed through the roofs of several homes.  Roads in the county have buckled and KJRH reports that Highway 62 near County Road 3470 has been affected, in addition to other county roads. 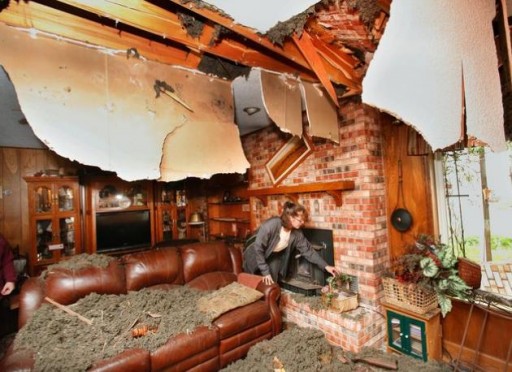 There are also damage reports in Muskogee and reports people as far north as Wichita felt the earthquake. It was felt in not only in Oklahoma but also in Arkansas, Texas, Missouri and Kansas. There are even some reports of the quake being felt in Illinois. 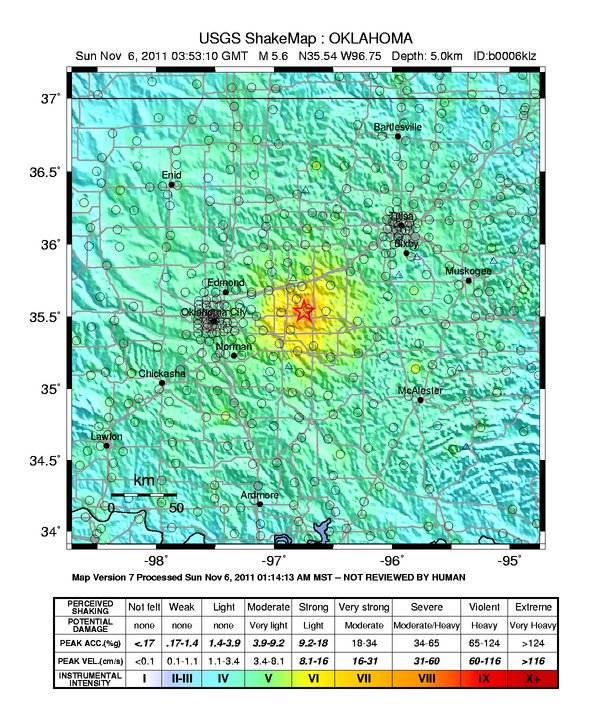 The Saturday evening earthquake is the largest to ever hit the state. Prior to this earthquake, the largest was a magnitude 5.5 quake that hit near El Reno, Okla., on April 9, 1952. The earthquake caused a 50-foot-long crack in the State Capitol Office Building in Oklahoma City.

The magnitude 4.7 and 5.6 earthquakes that occurred on November 5, 2011, east of Oklahoma City are typical of the larger areas of North America east of the Rocky Mountains that have infrequent earthquakes large enough to cause minor to major damage. Smaller areas of eastern North America are more active than elsewhere and include regions like the New Madrid seismic zone centered in the region where Missouri, Kentucky, Tennessee, and Arkansas come together, the Charlevoix-Kamouraska seismic zone of eastern Quebec, the Wabash Valley seismic zone along the border region of southeast Illinois and southwestern Indiana, the Central Virginia seismic zone (which had the 23 Aug 2011 M5.8 earthquake), the Eastern Tennessee seismic zone, a broad zone in New England, and another in the New York - Philadelphia - Wilmington urban corridor. However, much of the region from the Rocky Mountains to the Atlantic Seaboard can go years without an earthquake, and several U.S. states have never reported a damaging earthquake. An earthquake of magnitude 5.6 like the one that occurred yesterday east of Oklahoma City, are believed to be capable of striking anywhere in eastern North America at irregular intervals.

Earthquakes are not unusual in Oklahoma, but they often are too small to be felt. From 1972-2008 about 2-6 earthquakes a year were recorded by the USGS National Earthquake Information Center. In 2008, earthquake activity began to increase, with over a dozen earthquakes recorded that year. In 2009 the rate continued to climb, with nearly 50 quakes recorded--many big enough to be felt. The earthquakes from 1973-2007 were scattered broadly across the east-central part of the state. The events since 2007 have been more clustered in the vicinity northeast and east of Oklahoma City and generally southwest of Tulsa, Oklahoma. This is the region where the recent magnitude 5.6 earthquake occurred. There is always a small possibility of an earthquake of larger magnitude following any earthquake, but the occurrence of the magnitude 5.6 earthquake, and the increase in activity in recent years does not necessarily indicate that a larger more damaging earthquake will occur.

There have been dozens of aftershocks recorded following the November 5, 2011 magnitude 5.6 earthquake and its magnitude 4.7 foreshock that occurred on the same day. These aftershocks will continue for weeks and potentially months but will likely decrease in frequency. This is not an unusual amount of aftershock activity for a magnitude 4.7 to 5.6 earthquake sequence. In general, it is very difficult to correlate earthquakes to specific faults in the region and in eastern North America. The earthquake sequence that started yesterday occurred close to where a magnitude 4.1 earthquake occurred on February 27, 2010. From the location of the earthquake and the focal mechanism it is possible that this earthquake occurred on the Wilzetta fault. The Wilzetta fault is one of a series of small faults formed in the Pennsylvanian Epoch (approx. 300 million year ago) during the intraplate deformation known as the Ancestral Rocky Mountains mountain-building episode (orogeny). The relationship between the recent earthquakes and this older structure is still unknown and requires further investigation. To monitor and locate aftershock activity in more detail the Oklahoma Geological Survey deployed portable seismograph stations after the M4.7 on November 5, 2011, and they are in the process of deploying more stations in the next few days. The USGS deployed additional seismographs in the region in 2010 to help monitor the ongoing earthquake activity. 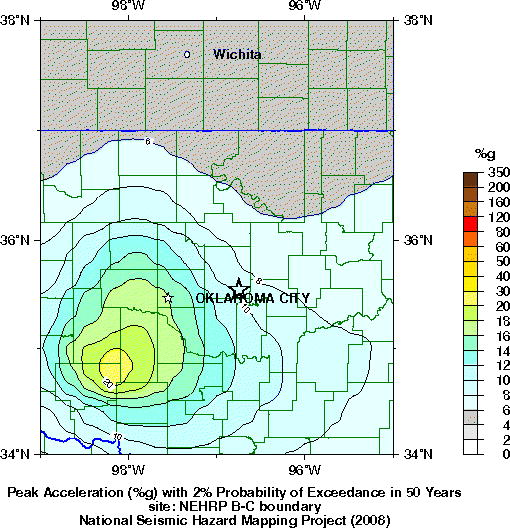 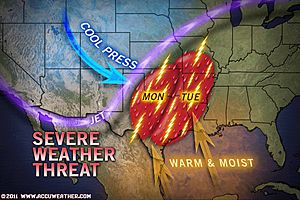 According to AccuWeather, severe weather is forecast to rattle Oklahoma on Monday. With the threat of severe weather early this week, any clean up of damage from the earthquake may be put on hold.

Damaging winds and tornadoes are possible not only across Oklahoma, but into northern Texas and eventually the lower Mississippi Valley. As this cold storm emerges from the Southwest on Monday, it will set the stage for a clash between the cold and warm air across Oklahoma and Texas. Strong winds aloft could transfer to the surface in the strongest thunderstorms, creating the risk for damaging winds. In addition, tornadoes and large hail cannot be ruled out.