Many studies have investigated the relationship between seismic activity and wastewater injection, particularly in Oklahoma where scientists recorded a 4 000% increase in the rate of earthquakes between 2008 and 2016.

Now, the USGS in Oklahoma has released an animation showing all recorded earthquakes between 2004 and 2016 and it's absolutely a must see.

The size of the dots and volumes are proportional to earthquake strengths.

The map below shows earthquake locations and chances of damaging shaking in Oklahoma and south central Kansas. 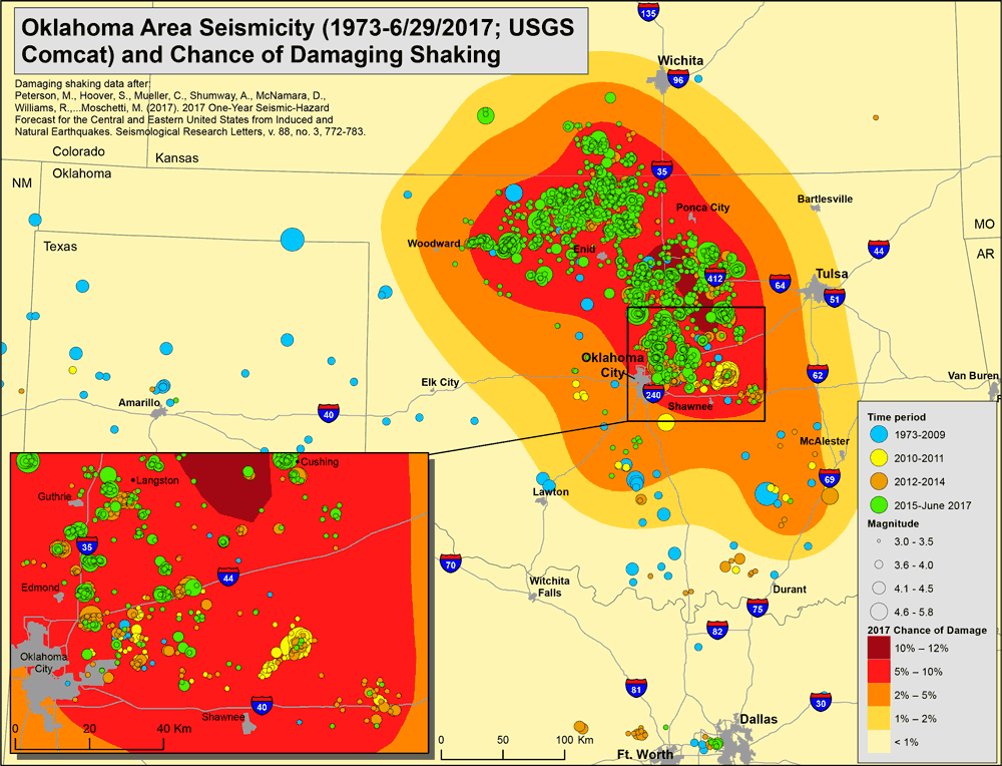 The largest earthquake in the history of the state so far is M5.8 Pawnee earthquake that hit on September 3, 2016.

Oklahoma's second largest earthquake is M5.7 Prague earthquake from November 6, 2011, and the third largest is M5.1 Fairview earthquake from February 13, 2016. This one hit about 12 km (7.4 miles) southwest of the high-rate wastewater disposal wells.

In the area around Fairview, the volume of injected fluids increased seven times in a three-year period. At the time, it was the largest earthquake since 2011 M5.7 Prague earthquake (Pawnee quake was upgraded from M5.6 to 5.8, making it the strongest earthquake in Oklahoma's history).

As a result of 2016 Pawnee M5.8 earthquake, Oklahoma authorities have immediately shut down 37 wastewater wells used by the fracking industry to extract oil and gas. According to Oklahoma Governor Mary Fallin, the decision to shut down the wells was a “mandatory directive” and the total area of interest was 1 877 km2 (725 mi2).