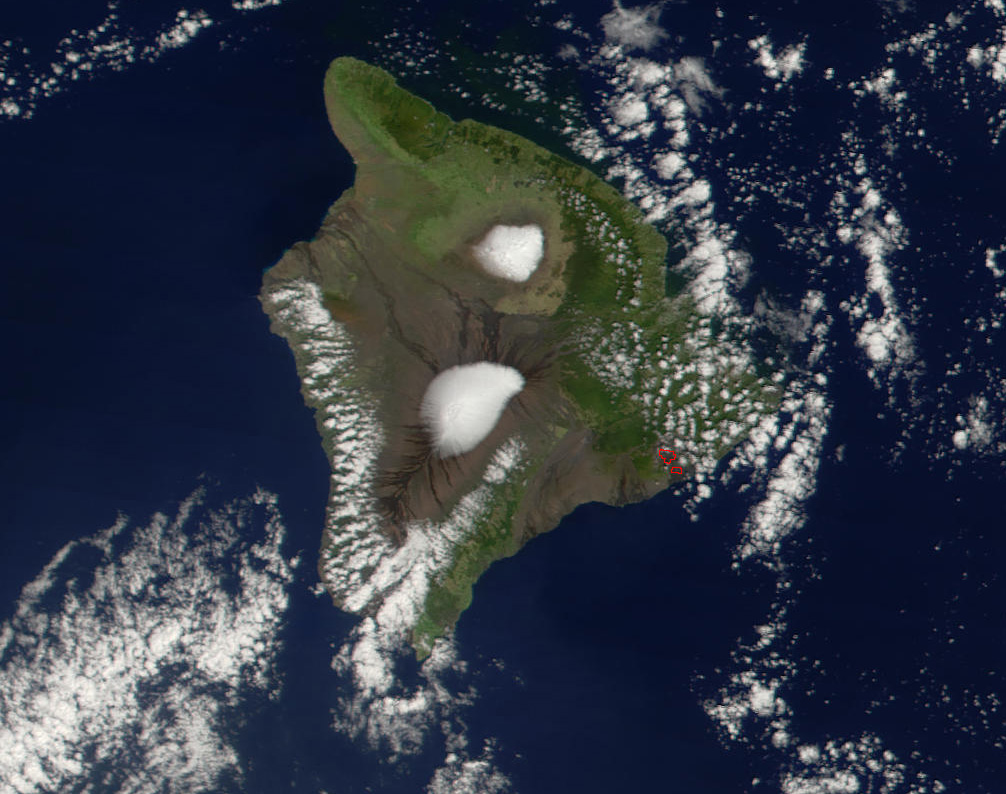 Scientists say the earthquake was the largest in a cluster of about 20 earthquakes on the north flank of Mauna Kea on Wednesday afternoon. Most of the aftershocks were too small to be felt, but, as of 3:30 p.m., two earthquakes with magnitudes greater than 3.0 had occurred in addition to the magnitude-4.5 event. 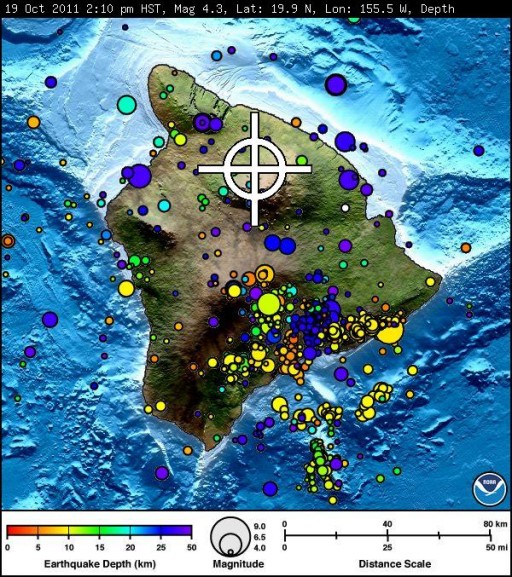 The 4.5 quake shook the Hamakua coast area around 6:30 p.m. The U.S. Geological Survey's 'Did You Feel It' map shows the areas that felt it most were Kamuela, Kailua Kona and Hilo. The preliminary magnitude measured by the Pacific Tsunami Warning Center was 5.0.

The last time a quake that size hit was in April of 2009, when a magnitude 5.2 rattled the Hilina region on the Big Island. (HawaiiNewsNow) 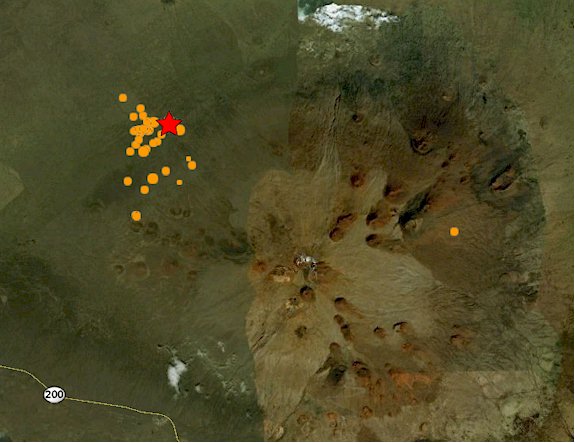 According to the Hawaiian Volcano Observatory, over the past 25 years, the north flank of Mauna Kea has experienced 10 earthquakes greater than magnitude 4.0, including today's event, at depths of 10–40 km (6–25 mi). Deep earthquakes in this region are most likely caused by structural adjustments within the Earth's crust due to the heavy load of Mauna Kea.

Adjustments beneath Mauna Kea during past similar events have produced a flurry of earthquakes, with many small aftershocks occurring for days after the main quake. Scientists say it is possible that additional small earthquakes may be recorded in the coming days.

Today's earthquakes caused no detectable changes on the continuing eruption of Kilauea Volcano. It was almost 5 years to the day when a major earthquake hit the Big Island. On October 15, 2006 a 6.7 magnitude earthquake caused property damage, injuries, landslides and power outages across the state. (HawaiiNewsNow) 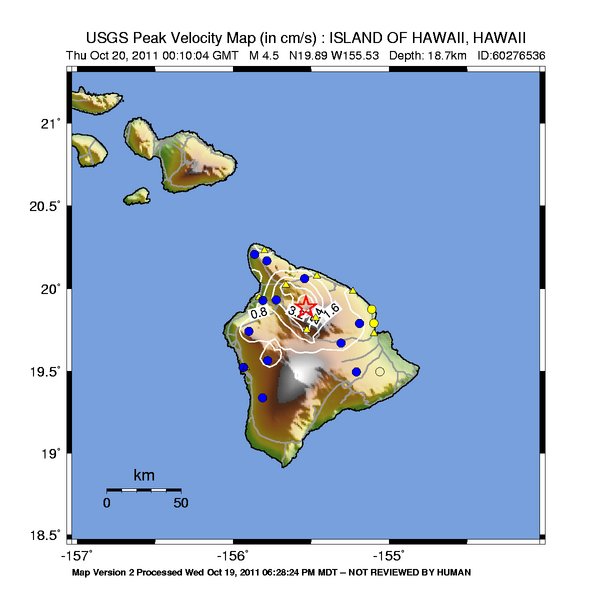 Mauna Kea, Hawaii’s highest volcano, reaches 4205 m, only 35 m above its neighbor, Mauna Loa. In contrast to Mauna Loa, Mauna Kea lacks a summit caldera and is capped by a profusion of cinder cones and pyroclastic deposits. Mauna Kea’s rift zones are less pronounced than on neighboring volcanoes, and the eruption of voluminous, late-stage pyroclastic material has buried much of the early basaltic shield volcano, giving the volcano a steeper and more irregular profile. This transition took place about 250,000 to 200,000 years ago, and much of Mauna Kea, whose Hawaiian name means “White Mountain,” was constructed during the Pleistocene. Its age and high altitude make it the only Hawaiian volcano with glacial moraines. A road that reaches a cluster of astronomical observatories on the summit also provides access to seasonal tropical skiing. The latest eruptions at Mauna Kea produced a series of cinder cones and lava flows from vents on the northern and southern flanks during the early to mid Holocene. (GVP, Smithsonian Institute)

Mauna Kea is a volcano on the island of Hawaii. Standing 4,205 m (13,796 ft) above sea level, its peak is the highest point in the state of Hawaii. However, much of the mountain is under water; when measured from its oceanic base, Mauna Kea is over 10,000 m (33,000 ft) tall—significantly taller than Mount Everest. Mauna Kea is about a million years old, and has thus passed the most active shield stage of life hundreds of thousands of years ago. In its current post-shield state, its lava is more viscous, resulting in a steeper profile. Late volcanism has also given it a much rougher appearance than its neighboring volcanoes; contributing factors include the construction of cinder cones, the decentralization of its rift zones, the glaciation on its peak, and the weathering effects of the prevailing trade winds. 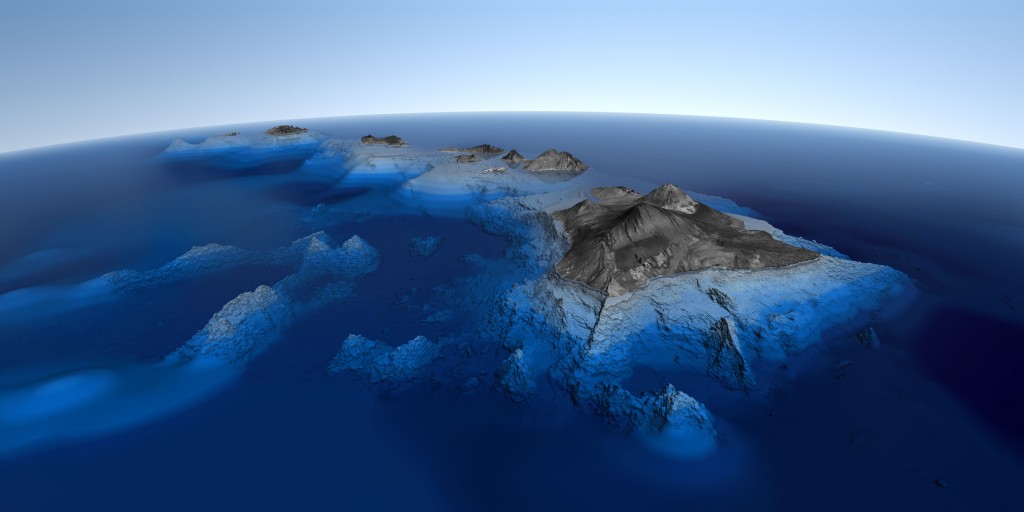 In Hawaiian mythology, the peaks of the island of Hawaii are sacred, and Mauna Kea is the most sacred of all. An ancient law allowed only high-ranking tribal chiefs to visit its peak. Ancient Hawaiians living on the slopes of Mauna Kea relied on its extensive forests for food, and quarried the dense volcano-glacial basalts on its flanks for tool production. When Europeans arrived in the late 18th century, settlers introduced cattle, sheep and game animals, many of which became feral and began to damage the mountain’s ecology.

With its high altitude, dry environment, and stable airflow, Mauna Kea’s summit is one of the best sites in the world for astronomical observation, and one of the most controversial. Since the creation of an access road in 1964, thirteen telescopes funded by eleven countries have been constructed at the summit. The Mauna Kea Observatories are used for scientific research across the electromagnetic spectrum from visible light to radio, and comprise the largest such facility in the world. Their construction on a “sacred landscape”, replete with endangered species, ongoing cultural practices, and viewplanes used in the traditional Hawaiian measurement of time, continues to be a topic of intense debate and protest. (Wikipedia)