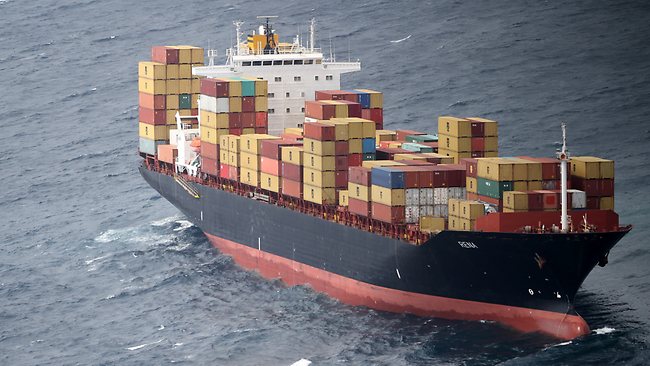 New Zealand said it was preparing for an environmental disaster Friday as a container ship stranded off the North Island threatened to break up and spill oil into the pristine Bay of Plenty.

The 47,000 tonne container vessel “Rena”, which hit a reef off the coast of Tauranga earlier this week, has already created an oil slick more than five-kilometres (three miles) long that has killed a number of seabirds.

But the pollution would be far worse if the ship broke up on the Astrolabe Reef, releasing the 1,700 tonnes of heavy fuel oil on board into a marine environment that is home to whales, dolphins, seals and penguins.

Environment Minister Nick Smith told Fairfax Media the accident “has the potential to be New Zealand’s most significant maritime pollution disaster in decades”.

Transport Minister Steven Joyce said salvage teams were scrambling to remove oil from the stricken vessel to protect the Bay of Plenty, one of the country’s top tourist destinations.

“The difficulty is that the situation is deteriorating and according to the advice I’ve received, there’s the possibility it could break up and sink,” Joyce told the New Zealand Herald.

“It’s certainly serious, what’s going on there. They’re certainly moving as fast as they can. It’s been a bit frustrating for everybody in terms of getting the right equipment to achieve the removal of the oil and containers.”

Earlier this year, the Australian Maritime Safety Authority detained the Rena for more than a day after it was found to have a number of deficiencies including a faulty hatchway, cargo not stowed or secured, and cracked and rusted parts.

Maritime New Zealand (MNZ) said it was preparing for the possibility the existing oil slick would hit the coast in the coming days after dispersants sprayed from aircraft proved ineffective.

“It has the potential to be very, very serious indeed simply because of the age of the ship, the damage that she’s sustained and the 1,700 tonnes of heavy fuel oil on board,” MNZ pollution response manager Andrew Berry told Radio New Zealand.

The weather in the Bay of Plenty is forecast to deteriorate early next week, giving added urgency to efforts to remove the oil in case the ship breaks apart in heavy swells.

The group’s seabird specialist, Karen Baird, said the timing of the accident, in the midst of breeding season, was “disastrous”.

“Many of them are sitting on eggs and some of them have got chicks that are starting to hatch, so that’s a big worry for us,” she told 3News.

New Zealand marine areas are home to a wide variety of wildlife, with many unique and threatened species inhabiting

New Zealand’s title as World Seabird Capital is unchallenged, with 1/3 of the worlds’ 346 species present in the New Zealand Exclusive Economic Zone, including ½ of the 22 albatross species of the world. A high proportion (40%) of the worlds albatrosses and their smaller cousins, the petrels and shearwaters breed only in New Zealand. Nineteen of these species breed only in New Zealand, and 18 of these are threatened with extinction. The Bay of Plenty is a rich environment for feeding for these species, and many of its small islands are refuges for vulnerable species.

The endemic Black Petrel Procellaria parkinsoni is one example, listed as Vulnerable by the IUCN. The breeding population is estimated at around 1750 pairs of nesting birds. Nesting only on Great and Little Barrier Island, the Black Petrel is active around the Bay of Plenty where the Rena oil spill has occurred. Black Petrels begin to return to their breeding colonies in early October, and feed extensively at this time of year around eastern New Zealand in preparation for egg-laying in November.

The Black Petrel species is subject to threats from predation at the breeding sites by cats and other introduced predators, and are killed in longline fisheries in New Zealand northern waters.  Any mortality of Black Petrels in the oil spill will be to adding to other deleterious influences on the population and may have very serious impacts on the population as a whole.

Research into the ability of seabird populations to cope with additional mortality has been conducted by the Ministry of Fisheries and has shown that only a small number of additional deaths can be sustained for adult seabirds of many species in the Bay of Plenty area. Additional deaths above the expected ‘natural’ deaths have potential to result in population declines for rare species such as the endemic Black Petrel. Cumulatively, deaths from fishing, and oiling add to unusual climatic incidents like this year’s very strong La Nina weather conditions, and can put a great deal of stress on fragile populations. Reduced numbers of adults of long lived species such as shearwaters and petrels has potential to have a very great effect on the sustainability of their populations, as adults killed in events such as oil spills leave young to die in the nest, and partners to the dead birds may take many years to re-mate.

Reef structures can operate like oases in the otherwise sparse feeding environment of the offshore marine systems of New Zealand. Their physical structure catches the current and planktonic larvae settle, out so they support many marine life-forms. Around the reef predatory fish, and other top predators such as whales and seabirds congregate to snatch fish.

Astrolabe Reef is a really well known diving and fishing spot, removed from the effects of coastal sedimentation so has very clear water. This results in a rich algal and invertebrates (sponges, tubeworms, and the like) assemblage and with this comes a very diverse fish community. If the oil and dispersant impact on the algae and invertebrates then the reef community will be significantly degraded. Recreational species like rock lobster, snapper and kingfish are all targeted and obvious, but there also the smaller ‘hidden’ ones like pink cusks and triplefins. These, like the algae kina, paua and sponges, are permanent inhabitants of a reef and incapable of moving on when the habitat is adversely effected by something as toxic as an oil spill and dispersant. The Bay of Plenty is the southern limit for some fish species and the off-shore islands and reefs are the best place to observe them.

Oiled seabirds have already been found dead close to the Rena and more birds have been spotted in the water, covered in oil.

Response teams have so far been unable to deploy oil booms to contain the spill. The response so far as been to use a dispersant called Corexit  9500 – which is being sprayed on the water to disperse the oil. Corexit is the same chemical used in the Gulf of Mexico to deal with the oil from BP’s Deepwater Horizon spill.

Unfortunately ‘dispersal’ essentially means never cleaning up the oil. It will just stay out there and continue to pollute the marine environment. The reason being that Corexit acts like a surfactant and attracts the oil. The oil then forms globules and sinks to the bottom.

Some studies have shown that Corexit 9500 is four times as toxic as the oil itself.  Both are now going into the ocean water. It’s not a good situation.

As the authorities battle to get the spill under control and mitigate against the worst environmental effects, we also hope that this incident gives the Government pause for thought with regards to it’s deepwater oil drilling plans. This accident is an unfortunate reminder of just how difficult it is to deal with oil spills at sea. It’s a slow spill in a relatively accessible place, and the weather and sea conditions have been favourable yet even so, it is testing NZ’s response capability to the limits.

It’s shaping up to be a significant disaster but, bad as it is, it will be a walk in the park compared to what would happen if we had a Deepwater Horizon type spill.

Despite the best intentions, the oil spill response team in Tauranga will not be able to do enough. There is no ‘enough’.