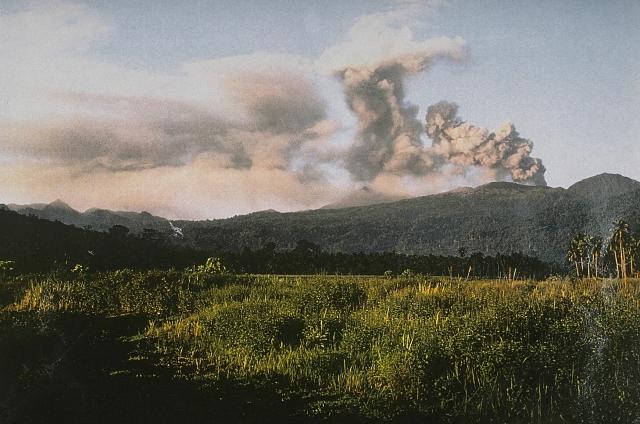 Dukono volcano (North Halmahera regency, Indonesia) activity increased on September 6, 2011, sending volcanic ash clouds as high as 800 meters in the sky. The capital town of the Halmahera regency lies at the port of Tobelo, approx. 15 km from the volcano (population approx. 15,000).

Residents were asked to evacuate at least about two kilometers from the foot of the volcano. The volcano observation post at Mount Dukono, told the press that dozens of volcanic earthquakes occurred every day. The eruption can be seen from Ternate, and island and biggest city in the area (has also an airport). The volcano is currently in PVMBG Alert status III (local sources) although the official PVMBG site is still showing an alert status 2 (alert status range from 1 to 4). North Halmehara is part of the province of North Maluku (Moluccas).

On 11 August ash explosions were audible within a radius of about 7 km from the base of the volcano. Ash was ejected as high as 1 km above the crater, producing plumes that drifted E and S, and also approached Tobelo City (14 km ENE). Seismographs at the Dukono observation post recorded more than 100 eruption earthquakes. Based on analyses of satellite imagery, the Darwin VAAC reported that on 11 and 14 August ash plumes rose to an altitude of 3 km (10,000 ft) a.s.l. and drifted 93 km NW. (EarthquakeReport) 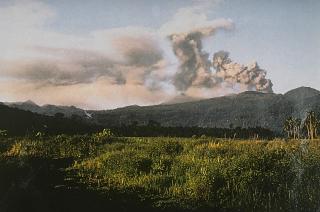 Reports from this remote volcano in northernmost Halmahera are rare, but Dukono has been one of Indonesia’s most active volcanoes. More-or-less continuous explosive eruptions, sometimes accompanied by lava flows, occurred from 1933 until at least the mid-1990s, when routine observations were curtailed. During a major eruption in 1550, a lava flow filled in the strait between Halmahera and the north-flank cone of Gunung Mamuya. Dukono is a complex volcano presenting a broad, low profile with multiple summit peaks and overlapping craters. Malupang Wariang, 1 km SW of Dukono’s summit crater complex, contains a 700 x 570 m crater that has also been active during historical time.

Dukono is a complex volcano and one of the most active volcanoes in Indonesia in historic time. The first historic eruption was in 1550. The eruption was explosive (VEI=3) but also produced lava flows. Deaths and damage were reported but details are not known. Dukono had smaller eruptions in 1719, 1868, and 1901. Dukono has been erupting continuously from 1933 to the present. Eruptions have been explosive (VEI=3) and also produced lava flows and mudflows. The eruptions have caused damage but no deaths. Volcanologists visited the volcano in 1978 and 1979. On the first visit, bombs as long as 4 m were being thrown as far as 250 m from the vent. An ash cloud rose up to 10 km above the crater. Ash was blown as far away as 15 km. Quiet periods lasting 6-8 hours were reported. On the second visit, explosive ejection of ash was observed. (OSU/GVP) 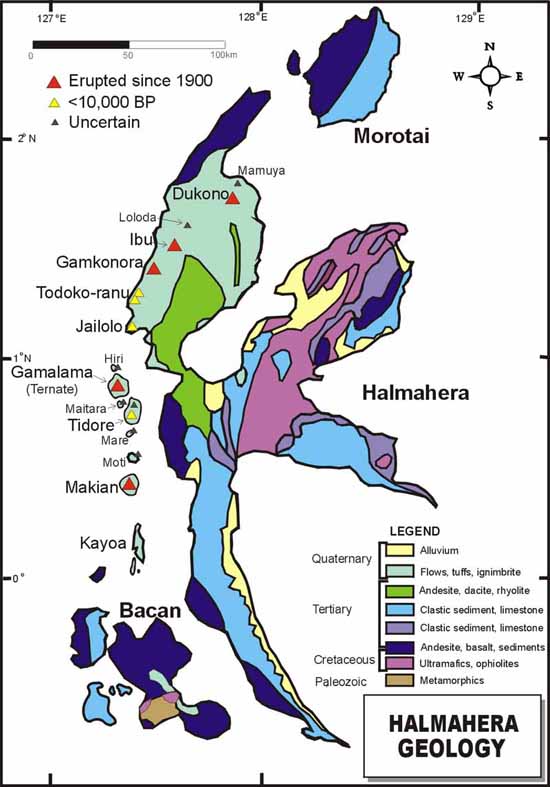