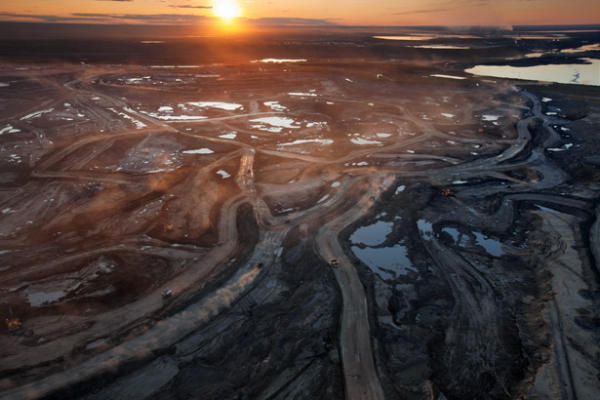 Actress Darryl Hannah and NASA scientist James Hansen are just two of the more than 800 environmental protesters that have been arrested in front of the White House this week. The crowd has been demonstrating against the proposed Keystone Pipeline XL project, which involves building a 1,700-mile (2,735-kilometer) heavy-oil pipeline from the tar sands of Alberta, Canada, to oil refinement facilities along the Gulf Coast of the United States.

The decision to allow TransCanada Corp. to go through with the $7 billion Keystone XL pipeline rests with the U.S. government, and the protesters are hoping to sway President Obama to veto the permit. Aside from the environmental disruption caused by constructing the underground pipeline, the environmentalists’ opposition to Keystone hinges on the hydrocarbon chemistry of tar sands and how they’re converted into crude oil. 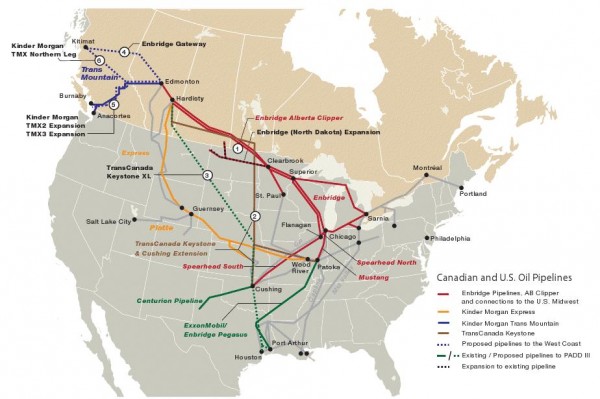 To understand what tar sands are and why they have a slippery reputation with environmentalists, here’s a few facts about unconventional oil fields:

Tar sands, also known as oil sands, are a mixture of roughly 90 percent sand, clay and water and 10 percent bitumen, a thick hydrocarbon liquid. After extracting that 10 percent of bitumen from the tar-sand mixture, the bitumen can be purified and refined into synthetic crude oil.

In North America, tar sands are concentrated in the Athabasca Oil Sands in Alberta, Canada. Because of Canada’s vast oil deposits, it's the top supplier of crude oil to the United States. Saudi Arabia is the second-largest supplier. Tar sands are also found in Venezuela and the Middle East.

The proposed Keystone XL pipeline would run from the Alberta tar sands down the middle of the United States through Montana, North Dakota, South Dakota, Nebraska and Oklahoma, all the way to Texas, where it will be refined and converted into gasoline. That's longer than the Trans Alaska Pipeline, which stretches 800 miles. Currently, there are around 55,000 miles of oil pipeline crisscrossing the United States.

Squeezing oil out of tar sand is an extremely wasteful process: it takes between 2 and 4 tons of tar sand and two to four barrels of water to produce a single barrel of oil. Rather than drilling for oil, enormous shovels carve out open pits in the tar sands, scooping out the greasy interior to be hauled to a processing facility.

There, the tar sand is combined with water to form a slurry, which forces the sand to sink to the bottom of the mixture while the bitumen floats to the top. Once the bitumen is extracted, the run-off is piped into large, stagnant tailing ponds of sand, water, and bitumen impurities.

To make it to the pump, refined bitumen heads to an oil refinery where it’s converted into gasoline. And since bitumen is a highly viscous “heavy” oil that doesn’t flow as easily as lighter crude, it requires more processing to facilitate its flow through the oil pipelines.

As the price of crude oil has risen and relations with the oil-rich Middle East have deteriorated, tar sands close to American borders have become a more attractive option in the past decade. Those in favor of the Keystone XL pipeline argue that importing tar sands oil from Canada, a political ally, will move the country toward more energy independence. However, those opposing the pipeline counter that reducing reliance on fossil fuels like tar sands oil is the only long-term path toward energy independence.

Tar sands around the world also collectively represent 3 trillion barrels of oil. But a majority of that tar sand bitumen lies too deep in the earth for recovery with today’s mining technology. Nevertheless, Canadian tar sands produce more than 1 million barrels of crude synthetic oil every day.

The U.S. government should reach a decision on the Keystone XL by the end of the year. The U.S. State Department has already issued a report on the pipeline’s potential environmental effects and found “no significant impact on most resources along the proposed pipeline corridor.” Yet, the report did raise concern about the potential of pipeline leaks in "environmentally sensitive areas," such as the Ogallala Aquifer, a primary freshwater source for the Plains regions.

NASA scientist James Hansen, who was arrested at the Keystone XL protests in front of the White House, commented that if the government approves the project, it's "game over" for curbing climate change. Meanwhile, in Alberta, enormous dump trucks keep hauling payloads of tar sands to be sifted, sloshed and siphoned, eventually, into our gas tanks. (DiscoveryNews) 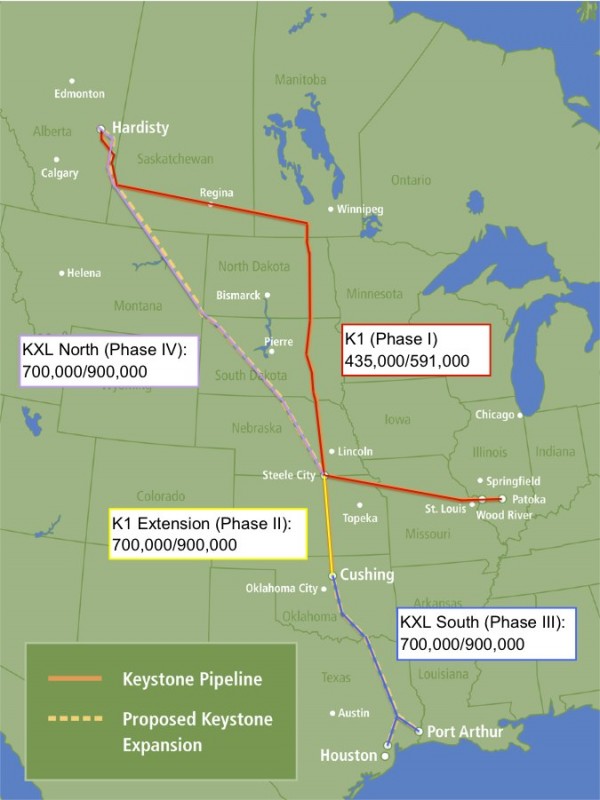 The 3,190 kilometres (1,980 mi) long Keystone XL starts from the same area in Alberta as the main pipeline.The Canadian section will consist of 529 kilometres (329 mi) of new pipeline. It joins the main Keystone Pipeline at Steele City, Nebraska. From there it runs parallel to the Cushing extensions.From Cushing, it would be expanded to Port Arthur, Texas, and Houston, Texas. The pipeline will reach to Illinois in late 2009, to Oklahoma in late 2010, and to Texas in 2012.TransCanada says the pipeline will later be expanded to reach refineries in the USA Gulf Coast. 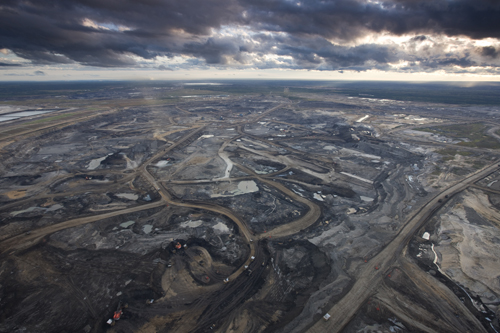 The original Keystone Pipeline cost $US5.2 billion with the Keystone XL expansion slated to cost approximately US$7 billion. The Keystone XL is expected to be completed by 2012–2013.