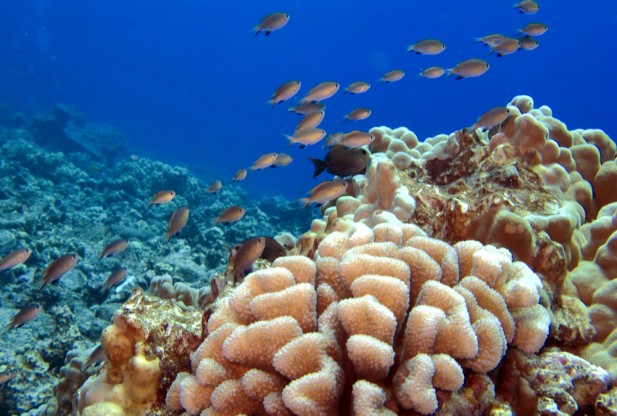 Since the beginning of the Industrial Revolution, the concentration of carbon dioxide in the atmosphere has been rising due to the burning of fossil fuels. Increased absorption of this carbon by the oceans is lowering the seawater pH (the scale which measures how acidic or basic a substance is) and aragonite saturation state in a process known as ocean acidification. Aragonite is the mineral form of calcium carbonate that is laid down by corals to build their hard skeleton. Researchers wanted to know how the declining saturation state of this important mineral would impact living coral populations.

Much of the previous research has been centered on the relationship between coral growth and aragonite levels in the surface waters of the sea. Numerous studies have shown a direct correlation between increased acidification, aragonite saturation, and declining coral growth, but the process is not well understood. Various experiments designed to evaluate the relative importance of this process have led to opposing conclusions. 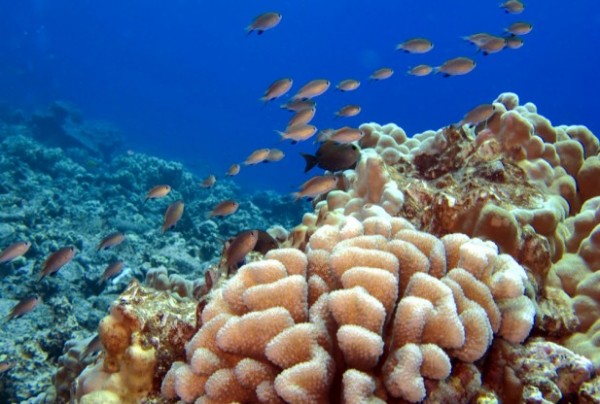 A recent reanalysis conducted by Dr. Paul Jokiel from the Hawaii Institute of Marine Biology (HIMB), suggests that the primary effect of ocean acidification on coral growth is to interfere with the transfer of hydrogen ions between the water column and the coral tissue. Jokiel re-evaluated the relevant data in order to synthesize some of the conflicting results from previous ocean acidification studies. As a result, Jokiel came up with the “proton flux hypothesis” which offers an explanation for the reduction in calcification of corals caused by ocean acidification.

In the past, scientists have focused on processes at the coral tissues. The alternative provided by Jokiel’s “proton flux hypothesis” is that calcification of coral skeletons are dependent on the passage of hydrogen ions between the water column and the coral tissue. This process ultimately disrupts corals’ ability to create an aragonite skeleton. Lowered calcification rates are problematic for our coral reefs because it creates weakened coral skeletons leaving them susceptible to breakage, and decreasing protection.

Dr. Jokiel is excited about this work; he states that “this hypothesis provides new insights into the importance of ocean acidification and temperature on coral reefs. The model is a radical departure from previous thought, but is consistent with existing observations and warrants testing in future studies”. In general, this hypothesis does not change the general conclusions that increased ocean acidification is lowering coral growth throughout the world, but rather describes the mechanism involved. (RedOrbit)