This is an aftershock of the magnitude 7.3 earthquake that occurred on June 24 (yellow star on the above map).

AEIC located about 300 aftershocks of the magnitude 6.8 event through end of October, 2011 (white circles on the above map). About 20 aftershocks have magnitudes 4.0 or greater.

The largest aftershocks of magnitude 5.7 occurred on September 19 and October 25.

"Due to the lack of seismic instrumentation in the region, only aftershocks of magnitude about 3 and above can be detected."

Tsunami Warning was issued for the coastal areas of Alaska from Unimak Pass, Alaska (80 miles NE of Dutch Harbor) to Amchitka Pass, Alaska (125 miles W of Adak) but it was later canceled. GDACS calculations are reporting only a tsunami risk of 0.1 meter in unpopulated Nikolski. Apart from the tsunami danger, there is NO real shaking danger as only 188 people will endure a light shaking. 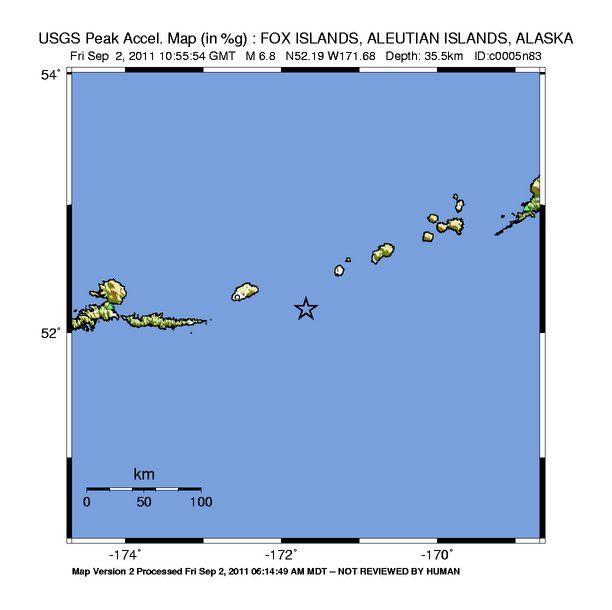 Earthquake risk is high in much of the southern half of Alaska, but it is not the same everywhere.  The Pacific plate is sliding northwestward past southeastern Alaska and then dives beneath the North American plate in southern Alaska, the Alaska Peninsula, and the Aleutian Islands. Most earthquakes are produced where these two plates come into contact and slide past each other. Major earthquakes also occur throughout much of interior Alaska as a result of collision of a piece of crust with the southern margin.