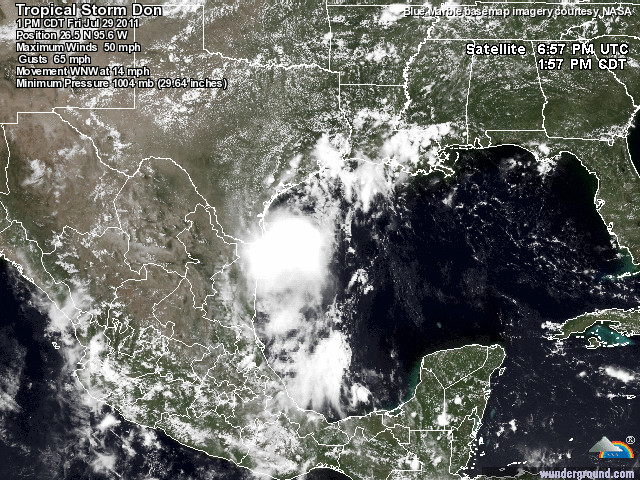 Tropical Storm Don has become slightly more organized the past few hours with maximum winds of 50 mph. The storm is on the verge of making landfall in southern Texas north of Brownsville later tonight.

All of South Texas, parts of which the United States Drought Monitor reports are currently suffering from an extreme to exceptional drought, will welcome at least an inch of rain from Don. Rainfall totals near and just north of where Don moves inland are forecast to equal or exceed 4 inches. While putting a serious dent in the drought, that amount of rain could easily trigger dangerous flash flooding.

The rip currents  will increase not just along the Texas coastline today, but elsewhere along the western Gulf Coast. Other dangers to places near and just north of Don’s landfall include some coastal flooding and damaging winds early tonight. The threat of damaging winds will ease as Don moves inland and weakens to a tropical rainstorm on Saturday. 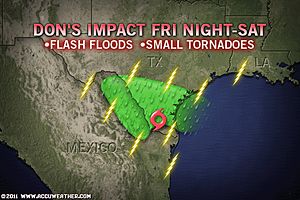 As Don moves inland and begins to unravel, localized heavy, gusty thunderstorms are likely to be generated. It is possible a few communities will be slammed fairly hard by a severe thunderstorm. In the situation of a strong tropical storm or minimal hurricane, most of the wind gusts are concentrated in the spiral bands. Since Don is forecast to be on the weaker end of the spectrum, the wind field should fall apart rather quickly.

A few weak tornadoes could be generated in the thunderstorms that develop after landfall or within the diminishing spiral bands during landfall.  The stronger a system is at landfall or one that is in a strengthening phase at landfall, the greater the risk of more nasty consequences, such as storm surge.

The water in the western Gulf of Mexico is fairly warm at a deep level. As a result, some last-minute strengthening of Don is possible before landfall. Therefore, Don should be a strong tropical storm at landfall.

There has been talk on the media that Don is a small system and this is true. However, clusters of potentially damaging, drenching thunderstorms can occur well away from the center and can be associated partially from another system, say a tropical warm front. (AccuWeather)