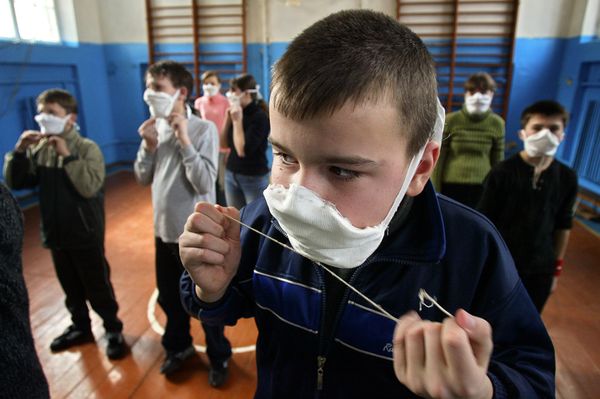 Nuclear radiation from bomb tests and power plant accidents causes slightly more boys than girls to be born, a new study suggests. While effects were seen to be regional for incidents on the ground, like Chernobyl, atmospheric blasts were found to affect birth rates on a global scale.

Millions fewer females have been born worldwide than would otherwise be expected, researchers estimate. And given Japan’s current nuclear troubles, another boy boomlet could be on the way, experts say.

For the new study, scientists analyzed population data from 1975 to 2007 for 39 European countries and the United States. They found an increase in the number of male births relative to female births in all of the countries investigated from 1964 to 1975—and in many eastern European countries for several years after 1986.

In “normal” circumstances, male births outnumber female births by a ratio of 105 to 100, study co-author Hagen Scherb said. “It’s not known what is the biological reason for this ratio,” he added. “It’s a natural constant, like the constant of gravity.” The statistical bumps observed in the study are in addition to that slight natural imbalance.

The 1960s and ’70s increase is attributed in the study to the global dispersal of radioactive atoms from atmospheric atomic bomb tests. The tests lofted radioactive atoms high into the atmosphere, where air currents caught the atoms and then dispersed them around the planet. Open-air nuclear tests were most common from the late 1940s until 1963, when the Limited Test Ban Treaty sent such testing underground, at least for signatories the United States, Soviet Union, and United Kingdom.

The scientists think the second spike in their data is due to the 1986 Chernobyl disaster, in which a nuclear reactor exploded in Ukraine, which was then part of the Soviet Union.

In Chernobyl’s case, the effect was more localized, since the radioactive release occurred on the ground.

“The closer the country was to Chernobyl, the stronger the effect,” said Scherb, a biostatistician at the German Research Center for Environmental Health in Munich.

For example, more males were born relative to females in neighboring Belarus than in France, hundreds of miles away (regional map).No post-Chernobyl effect was seen in the U.S., which was presumably too far away for the radioactive atoms to reach in sufficiently high amounts. In both instances, the increase in the ratio of male to female births was meager—less than one percent.

But the effect lasted years before leveling off or reversing—not surprising, since radioactive atoms can remain harmful for several years, the study authors say. And even with such a small increase in the percentage of male births, the global release of nuclear radiation has, over decades, led to several million fewer girls being born worldwide than would otherwise be expected, the authors estimate.

The biological mechanism behind the skewed sex ratio wasn’t investigated in the study. But previous radiation experiments on animals suggest the boost in males may be due to damage to X chromosomes in sperm, Scherb said. In humans, a sperm cell contains either an X or Y chromosome, while an egg contains no Y chromosome. If an embryo has an XY combination, it will become a boy. An XX combination results in a girl.

It could also be that, because X chromosomes—being larger than Y chromosomes—carry more genes, X chromosome damage is more likely to result in a fatally deformed embryo.  Whatever the exact mechanism, the result of disproportionately damaged X chromosomes should be fewer daughters and more sons, the authors say—precisely the effect seen in the new study.

The new study is “the most convincing documentation” to date that radiation can lead to sex bias in humans, according to geneticist Karl Sperling of the Institute of Medical Genetics and Human Genetics in Berlin.

The findings challenge the conventional belief that exposure to nuclear radiation has no, or negligible, genetic effects in humans, added Sperling, who wasn’t involved in the study, published in the latest issue of the journal Environmental Science and Pollution Research.

Though based largely on Cold War-era statistics, the findings are newly relevant, according to study co-author Scherb.

In the wake of Japan’s Fukushima Daiichi nuclear power plant accident, radiation could once again lead to a gender bias in humans. (NationalGeographic)