On April 15, 2020, French national public expert in nuclear and radiological risks —  Institute for Radiological Protection and Nuclear Safety (IRSN) — issued a new information report which provides an assessment of the possible radiological impacts for the responders as well as for the inhabitants of capital Kiev, Ukraine during wildfires within the Chernobyl Exclusion Zone in early April 2020.

Wildfires broke out in Ukraine about ten days ago in a territory heavily contaminated by the 1986 Chernobyl nuclear accident, IRSN stated.

These fires reached the exclusion zone and the surrounding environment (about 1 km / 0.62 miles) of the nuclear power plant from April 8, 2020.

By Thursday, April 9, the police evacuated residents from the village of Poliske, which is located within the zone.

The image below shows a wildfire 6 km (3.7 miles) west of Pripyat and the Chernobyl Nuclear Power Plant on April 9.

Images below were acquired by Sentinel-2 on April 13. The situation was similar to the day before. 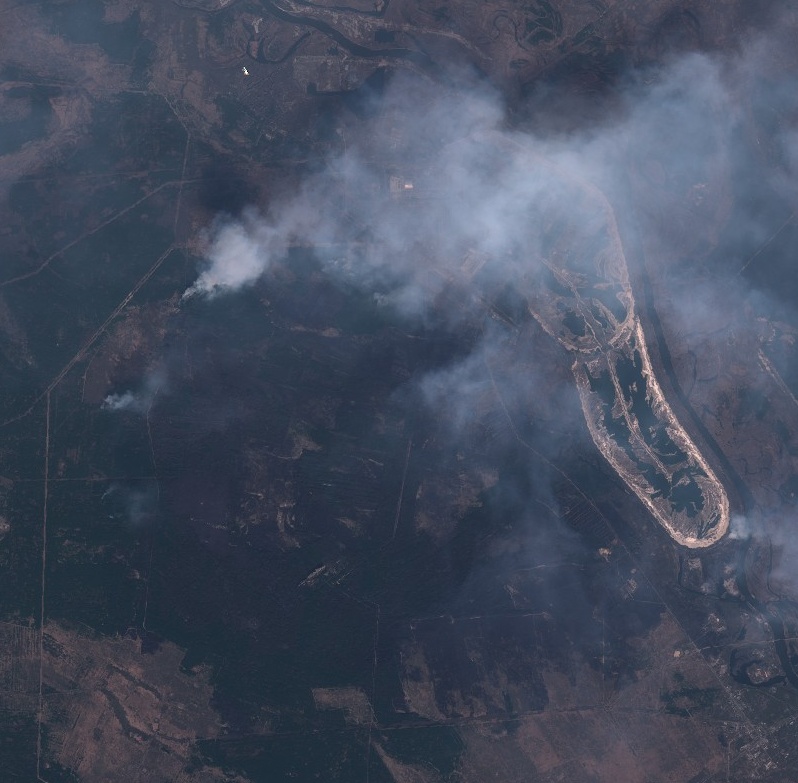 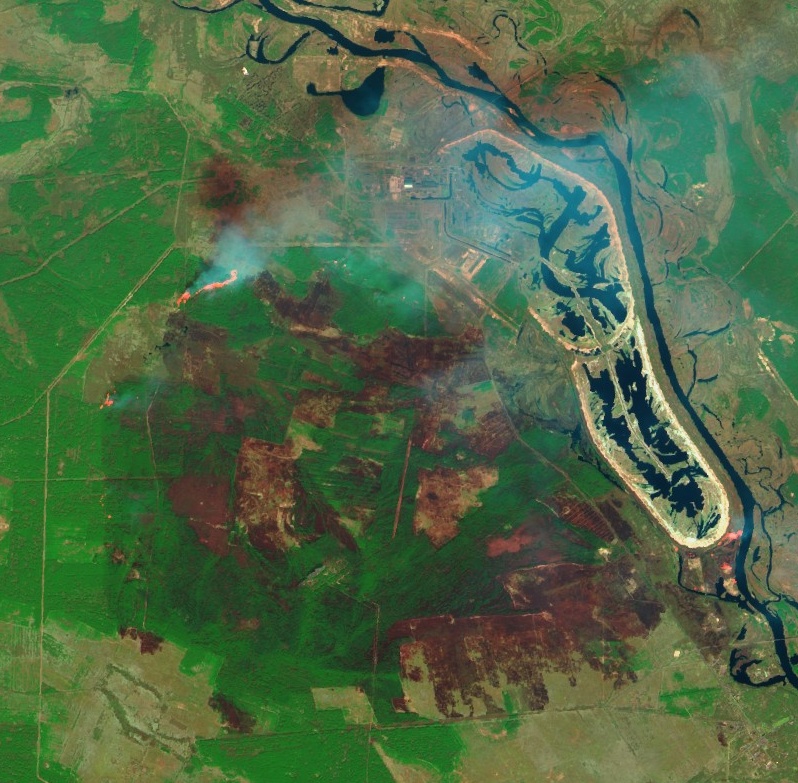 On Tuesday, April 14, Ukrainian authorities assured that the risks of fire spreading were now limited to isolated or smoldering fires. At the end of April 14, they indicated that the fires were under control.

The satellite images of April 15, 2020, showed no more fire spot in this part of heavily contaminated territories: 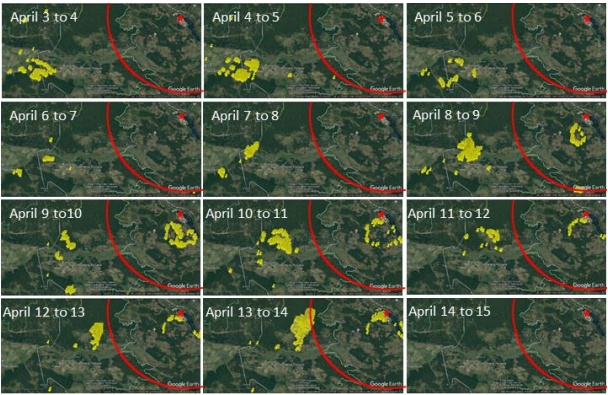 Daily maps of fire spots between April 3 and April 15, 2020. Location of the Chernobyl nuclear power plant is marked with a red star and the arc of a red circle delimits the exclusion zone with a radius of 30 km around the plant. Data source: NASA / FIRMS. Image courtesy IRSN

However, it should be noted that these measurement devices are only capable of detecting major radiological accidents. "Such a probe is installed at the French Embassy in Kiev and is part of the IRSN's Téléray network deployed in France," the institute said.

"The radioactivity released into the atmosphere by the fires was therefore not high enough to be detected by these devices. On the other hand, much more sensitive measurements have been carried out by various Ukrainian scientific bodies that have published airborne 137Cs activities from aerosol samplings."

These values are significantly higher than the values usually measured for cesium 137 in the air in Kiev and show evidence of the passage of contaminated air masses. However, they remain moderate and have no health consequences, IRSN said.

In the Chernobyl exclusion zone, much greater air contamination is observed due to the closeness to the measuring devices in the burned area. The institute carried out an estimation of the dosimetric impact of the fires according to different scenarios. The results showed that for a fire-fighter who worked for 100 hours in the exclusion zone in an environment with an airborne activity level of 1 Bq/m3 (or 1,000,000 µBq/m3 ) of cesium 137 and 1 Bq/m3 of strontium 90 (a major assumption compared to the measurements carried out in the area), the calculated dose corresponding to the inhalation of radioactive fire smokes is approximately 13 micro sievert (µSv).

It should be noted that this dose is much lower than that which results from the external exposure of fire-fighters by the radiation emitted by the contaminated soil and which, in the exclusion zone, is very often greater than 1 µSv/h. This is consistent with estimates made by Ukrainian scientists which indicate that the doses received by fire-fighters as a result of smoke inhalation are in the range of 1% of the dose induced from the exposure to ground radiation.

For a resident of Kiev exposed for a few days to radioactivity levels comparable to those measured by Ukrainian organizations in Kiev, the inhalation dose received by an adult is less than 1 nano sievert (1 nSv = 0.001 µSv) which is extremely weak. For more information about the Dosimetric impact, see Chapter 4 of the report. 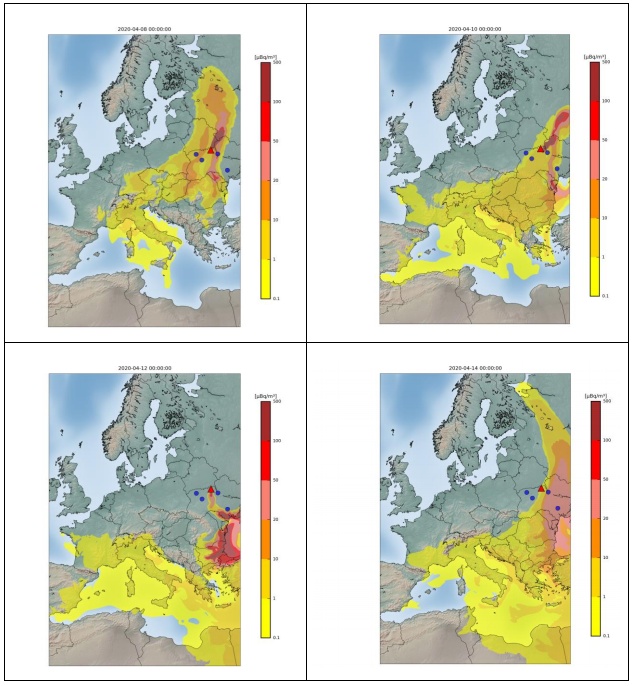 Modeling of the plume dispersion over Europe. Red triangles represent the fire locations of the fires and the blue dots the measurement stations in Ukraine). Image courtesy IRSN

The simulations carried out show a good agreement between measurements provided by the Ukrainians and modeling results. On this basis, IRSN simulations indicate that air masses from the area of the fires that occurred on April 5 and 6 were able to reach France in the evening of April 7, 2020.

As of April 14, these air masses still covered half of the territory. Expected radioactivity levels in France are extremely low, below 1 µBq/m3 in 137Cs.

The releases occurring between April 9 and April 11, 2020 are more significant according to the modeling.

The weather conditions that prevailed until April 14 favored the transport of air masses to Belarus, southern Ukraine, eastern Romania and Bulgaria, but they have not reached France, as of April 15.

"Information note – Fires in Ukraine in the exclusion zone around the Chernobyl power plant" published by IRSN on April 15, 2020. (irsn.fr)