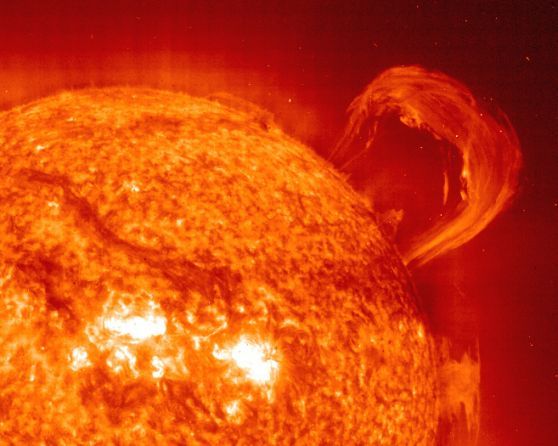 During the early hours of July 9th, a Coronal Mass Ejection (CME) billowed away from new sunspot 1247. A preliminary analysis of data from NASA's twin STEREO-A and -B spacecraft suggests that the flank of the CME could hit Earth's magnetic field sometime on July 11th or 12th. This is not a major CME, but it could spark polar geomagnetic storms.

Solar activity has been at very low levels for the past 24 hours. Region 1247 (S18W02) produced the largest event of the period, a B4 x-ray event at 09/0028Z. A nearby filament eruption was associated with this event with a subsequent partial-halo asymmetric CME, first visible in LASCO C2 imagery at 09/0125Z. This CME does
have an earth directed component. Region 1249 (S16E25) was numbered early in the period but like many of the numbered regions on the disk, has remained stable.

The elevated activity was due to a solar sector boundary (SSB) crossing early in the period. Measurements by the ACE spacecraft indicate the onset of a coronal hole high speed stream (CH HSS) with solar wind speeds increasing, from 350 km/s to around 450 km/s.

The geomagnetic field is expected to be at quiet to unsettled levels for the next two days (10-11 July) as a CH HSS continues to be geoeffective. On day three (12 July), coupled with the arrival of another CH HSS, the CME, observed earlier today, is expected to impact Earth.

Since this CME was only a partial-halo and is not traveling at great speed, only unsettled to active levels are expected.