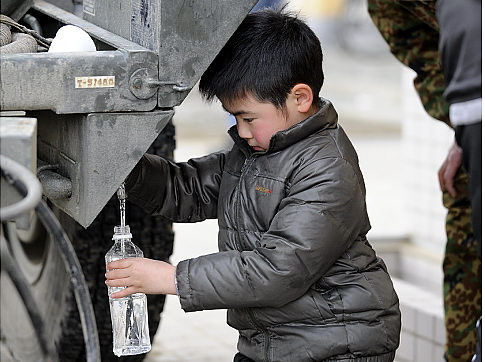 Radioactive cesium-137 was found in Tokyo’s tap water for the first time since April as Japan grapples with the worst nuclear disaster in 25 years. The level was below the safety limit set by the government.

Cesium-137 registered at 0.14 becquerel per kilogram in Shinjuku ward on July 2 and none was discovered yesterday, compared with 0.21 becquerel on April 22, according to the Tokyo Metropolitan Institute of Public Health. No cesium-134 or iodine-131 was detected, the agency said on its website.

Japan is battling radiation leaks into the air, soil and water after an earthquake and tsunami on March 11 knocked out cooling systems at Tokyo Electric Power Co.’s Fukushima Dai-Ichi nuclear station, resulting in the meltdown of three of the six reactors at the plant. Products including spinach, mushrooms, bamboo shoots, tea, milk, plums and fish have been found to be contaminated with cesium and iodine as far as 360 kilometers (224 miles) from the station. Prolonged exposure to radiation in the air, ground and food can cause leukemia and other cancers, according to the London-based World Nuclear Association. (MyWeatherTech)

Caesium-137 (137 55Cs, Cs-137) is a radioactive isotope of caesium which is formed as a fission product by nuclear fission. It has a half-life of about 30.17 years, and decays by beta emission to a metastable nuclear isomer of barium-137: barium-137m (137mBa, Ba-137m). (About 95 percent of the nuclear decay leads to this isomer. The other 5.0 percent directly populates the ground state, which is stable.) Ba-137m has a half-life of about 153 seconds, and it is responsible for all of the emissions of gamma rays. One gram of caesium-137 has an activity of 3.215 terabecquerel (TBq).

The photon energy of Ba-137m is 662 keV. These photons can be useful in food irradiation and in the radiotherapy of cancer. Caesium-137 is not widely-used for industrial radiography because it is quite chemically reactive, and hence, difficult to handle. Also the salts of caesium are very soluble in water, and this complicates the safe handling of caesium. Cobalt-60, 60 27Co, is preferred for radiography, since it is chemically a rather nonreactive metal offering higher energy gamma-ray photons. Caesium-137 can be found in some moisture and density gauges, flow meters, and related sensors.

Caesium-137 reacts with water producing a water-soluble compound (caesium hydroxide), and the biological behavior of caesium is similar to that of potassium and rubidium. After entering the body, caesium gets more or less uniformly distributed throughout the body, with higher concentration in muscle tissues and lower in bones. The biological half-life of caesium is rather short at about 70 days.  Experiments with dogs showed that a single dose of 3800 μCi/kg (140 MBq/kg, or approximately 44 μg/kg) is lethal within three weeks.

Accidental ingestion of caesium-137 can be treated with Prussian blue, which binds to it chemically and then speeds its expulsion from the body.

The improper handling of caesium-137 gamma ray sources can lead to release of this radio-isotope and radiation injuries. Perhaps the best-known case is the Goiânia accident, in which an improperly-disposed-of radiation therapy system from an abandoned clinic in the city of Goiânia, Brazil, was scavenged from a junkyard, and the glowing caesium salt sold to curious, uneducated buyers. This led to multiple deaths and serious injuries from radiation exposure.

Caesium gamma-ray sources that have been encased in metallic housings can be mixed-in with scrap metal on its way to smelters, resulting in production of steel contaminated with radioactivity.

One notable example was the Acerinox accident of 1998, when the Spanish recycling company Acerinox accidentally melted down a mass of radioactive caesium-137 that came from a gamma-ray generator.

In 2009, a Chinese cement company in China (the Shaanxi Province) was demolishing an old, unused cement plant and it did not follow the standards for handling radioactive materials. This caused some caesium-137 from a measuring instrument to be melted down along with eight truckloads scrap metal on its way to a steel mill. Hence, the radioactive caesium was melted down into the steel. (…)