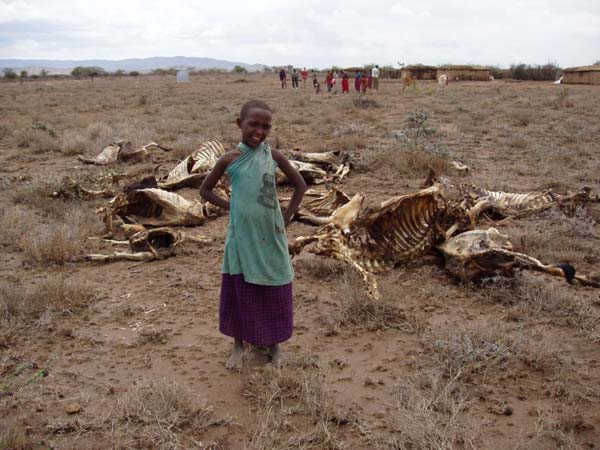 With the UN warning that both East and the Horn of Africa have been hit by the worst drought in 60 years, international aid agencies have warned of an alarming gap in the food pipeline to reach those most in need. More than 10 million people are thought to be affected across the East African region.

The UN says that large swathes of northern Kenya and Somalia are now in the “emergency” category, one phase before what is officially classified as famine. Two consecutive poor rainy seasons have resulted in one of the driest years since 1950/51 in many pastoral zones.

Child malnutrition rates in the worst affected areas are more than double the emergency threshold of 15 percent and are expected to rise further. Of mounting concern to aid agencies is the news that humanitarian appeals for Somalia and Kenya, each for about $525 million, are barely 50 percent funded.

Animals desperately seeking water and food are collapsing in exhaustion and the local community cannot clear them fast enough. There is not even enough meat left on the carcasses to eat. The sight of dead camels is particularly significant because they are prized within pastoralist communities as vital to their livelihoods. Now there is a serious shortage of water and food for children and their families, leading to widespread devastation of farmland, failed harvests and livestock death.

Families have lost their incomes and food supplies. Food and water prices have soared. The ground has cracked and swathes of brown land has replaced green. Pastoralists are used to coping with occasional droughts and dry seasons, but these successive droughts have pushed their resiliency to the limit.

Now the UK-based aid agency Save the Children is urgently appealing for more funds to reach the most vulnerable children. NGOs warn many moderately poor households have been pushed over the edge. (DailyNation)

Over the past 60 years the Indian Ocean has warmed rapidly due to greenhouse gas emissions from human activity. The warmer Ocean heats up the air above, causing it to rise until it hits a cooler patch in the atmosphere. At that point, the hot air condenses and falls as rain (the process of convection). Unfortunately, the rain falls in middle of the tropical Indian Ocean and not over land. This region is part of a global atmospheric current called the Walker circulation.

The air, which has now lost its moisture, flows westward and descends over eastern Africa. The winds bear little rain.

Scientists say that between 1980 and 2009, oceanic heating has reduced precipitation over eastern Africa during the vital “long-rains” season. (Nature)