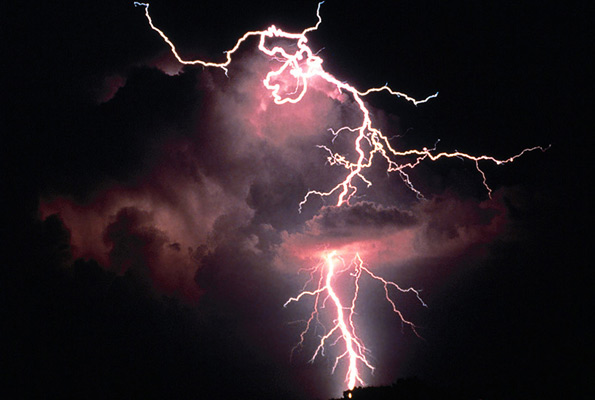 Local media reported that a further 21 pupils were burned after lightning struck at a second school in Zombo district, about 380 km north of Kampala. Police could not confirm the incident.

Nabakooba could not provide an exact figure for the total number killed by lightning in recent weeks, but local newspaper The Daily Monitor reported a total of 28 killed and scores injured in the past week, including Tuesday's incidents.

Uganda is experiencing unseasonably heavy rainstorms and concern about the number of recent lightning strikes has prompted lawmakers to demand an official explanation from the government. (News.au.)

On Saturday, lightning struck a group of mourners who were sitting under a tree, and three died moments later. Eyewitnesses said over 50 people were injured but 15 serious cases were taken to Lira Regional Referral Hospital, Alebtong Health Centre IV, and Lira Medical Centre.

The rate at which lightning is killing people in the country has become a matter of concern. The number of people killed this month is more than ten in the country with some cases unreported. One person was killed in Amolatar in a different incident on Saturday. Alfred Ibek was hit at 3 pm while going to a landing site.

The devastation, which is by far the biggest since unseasonal heavy rainstorms descended on the country, formed the highlight of debate on the floor of Parliament yesterday as lawmakers put the government on the wall to explain what is going on. Some 100 pupils at Runyanya PS are said to have been affected by the late afternoon thunderstorm, and medical personnel said the death toll was feared to rise by today.

Dozens of the dead were taken to the Kiryandongo Hospital morgue, three miles away from the primary school. Grief and emotion engulfed the hospital as many thronged to indentify the dead. Mr Patrick Kawamara, the Kiryandongo Resident District Commissioner, told that doctors had confirmed 18 dead, while 36 had been admitted nursing serious injuries. This brings the death toll from lightning strikes in the past one week to 28. Those killed yesterday included 14 girls, two boys and a female student-teacher.

Meanwhile, a total of 21 other pupils at Paidha Role Model Primary School in Zombo District received burns after they were struck by a bolt of lightning. Witnesses said several pupils writhed on floors in their classrooms holding their ears and eyes. The injured pupils were rushed to Nyapea Hospital, some 10km away from the school.

Six people in Yumbe District were similar victims while a cleric in Hoima is admitted to a private clinic partially paralyzed after he was struck on Monday. In the last week, there have been several incidents of lightning strikes that have left several people dead and untold damage.

The matter was raised by Kyenjojo Woman MP Lyndah Timbigamba who reported that an unspecified number of cows in her district had been killed by lightning. Scientists believe that magnetic force generated by lightning provides an electric jolt so powerful that it can stop someone’s heart. Traditional advice for people caught in a thunderstorm is to avoid sheltering under trees as they act as lightning conductors and to make sure you are not the tallest object on the ground. (TheDailyMonitor)