A thick plateau of strong rock along the seabed may have allowed the massive, magnitude 9.1 Sumatra earthquake to reach far closer to the Earth's surface, giving the deadly tsunami it triggered even greater power, according to new research. 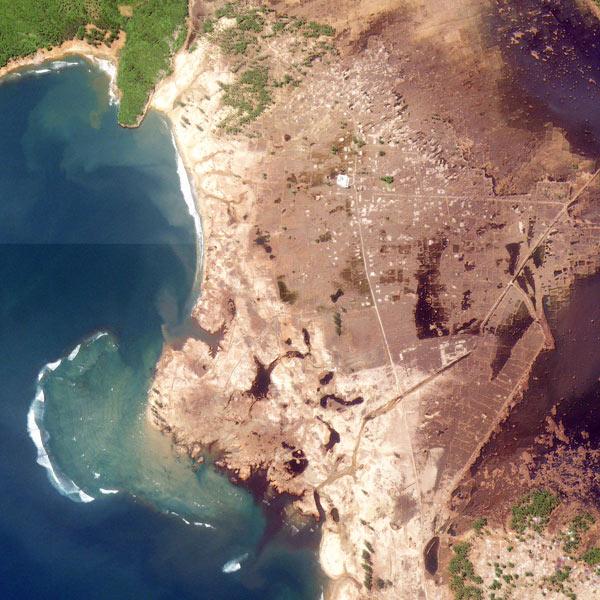 In some cases, those sediments are comparatively weak and form slopes along the trenches on the seafloor where the plates meet. Yet along the Sumatra quake subduction zone, researchers discovered a flat sediment plain about 2.5 to 3 miles (4 to 5 kilometers) thick and 80 miles (130 km) wide, PlanetEarth Online reported.

Weaker sediments — those with a consistency closer to taffy — tend so slow the energy of an earthquake as it races from deep inside the earth toward the seabed. Yet if the sediments are strong — more akin to peanut brittle — the earthquake can displace larger portions of the seafloor, according to the PlanetEarth Online report. 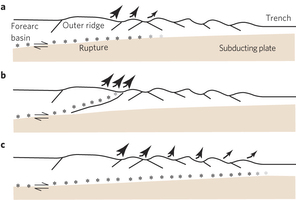 It appears the plain near Sumatra is made of particularly strong sediments that allowed the quake's rupture to move quickly, thus reaching closer to the seafloor and displacing even more water than it might have otherwise, thus producing a  particularly large tsunami.

The research is published online in the June 19 issue of the journal Nature Geoscience.

The earthquake struck just north of the Indonesian island of Simeulue west of Sumatra. It was caused by a massive movement of the Indo-Australian Plate which is being pushed beneath the Sunda plate to the east. This is known as a subduction zone and in this case, the plates meet at the Sunda Trench, around 300 km west of Sumatra.

The Sunda Trench is full of ancient sediment, some of which has washed out of the Ganges over millions of years forming a massive accumulation of sedimentary rock called the Nicobar Fan. As the Indo-Australian plate is subducted, these sediments are scraped off to form what's called an accretionary prism. Usually, an accretionary prism slopes consistently away from the trench, but here the seabed shallows steeply before flattening out, forming a plateau.

Subduction earthquakes are thought to start around 30km beneath the Earth's surface. Slip on the fault propagates upwards and generally dissipates as it reaches weaker rocks closer to the surface. So the sediment in the Sunda Trench should have slowed the upward and westward journey of the 2004 earthquake, meaning the tsunami was generated in the shallower water on the landward (east) side of the trench.

But in fact, the fault slip seems to have reached close to the trench, lifting large sections of the seabed in deeper water and producing a much larger tsunami. 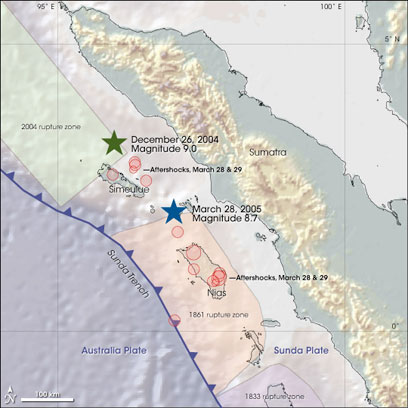 To understand what might be behind this uncharacteristic geological behavior, the research team looked at seismic images of the earth's crust around part of the 2004 rupture zone.

They found that the sediments in the trench are 4-5km thick, and where they form a plateau in the accretionary prism the sediments allow seismic waves to travel much faster than you find at locations immediately to the south. This indicates that the rocks are stronger than would be expected.

The researchers found no evidence for any 'splay faults' in the accretionary prism which would have helped dissipate the earthquake's power. So the depth and solidity of these overlying sediments seem to have played a part in the power of the devastating tsunami that the earthquake generated.

Assessments of earthquake hazard around the world should look closely at similar subduction zones, says the researchers' report. A plateau formed of strong sediments overlying an area of converging plates could represent a greater hazard for tsunami generation than previously known. (PlanetEarth)

Delhi shivers through coldest October and November in more than 50 years, India

Heavy rains during the past few days have flooded Vietnam's central and central highland regions, leaving at least five people dead and more than 5 600 displaced. Between November 28 and December 1, up to 986 mm (39 inches) of rain has been recorded, according...

Six people went missing after a massive landslide, among many other smaller ones, hit the community of Haines in southeast Alaska following heavy rains, the Alaska State Troopers reported Wednesday, December 2, 2020. Up to 3 m (9 feet) of debris engulfed the area,...

Noctilucent clouds (NLCs) over the South Pole are missing this year

Noctilucent clouds (NLCs) over the South Pole are missing this year, but consider it only the tip of the iceberg, Dr. Tony Phillips of the SpaceWeather said. Missing NLCs is just one of the curious weather patterns currently underway at the southern end of our...

A bright daylight fireball exploded over northern New York, U.S. at 17:10 UTC on December 2, 2020, creating a bright flash in the middle of the day. Witnesses from parts of upstate New York said the visual event was followed by a sonic boom. The American Meteor...

Tropical Cyclone "Burevi" made landfall over northern Sri Lanka late December 2, 2020 (LT) with maximum sustained winds up to 90 km/h (55 mph) and heavy rain. This the 5th named storm of the 2020 North Indian Ocean cyclone season and the second to form in...

After a few months of low-level activity, a strong explosion took place at Japan's Sakurajima volcano at 02:55 UTC on December 2, 2020. Part of the eruptive column was obscured by a meteorological cloud, making height estimate difficult. Finally saw some...

A significant eruption occurred at the Indonesian Semeru volcano on December 1, 2020, generating a large pyroclastic flow and forcing thousands of residents to flee their homes. According to the CVGHM, the volcano has now entered the stage of generating frequent...

Take a look at the sublime display of Etna's natural fireworks, with its Southeast Crater now erupting from two vents simultaneously. This video was recorded by INGV's Boris Behncke from Tremestieri Etnao on the southern side of Etna at daybreak on December...

At least 50 explosions in 9 hours at Telica volcano, Nicaragua

An uptick in activity has been observed at the Nicaraguan Telica volcano on Monday, November 30, 2020, with low-level ash emission and dozens of explosions at regular rates. Ashfall was reported in nearby communities, including El Panal, Cristo Rey, Los Cocos, and...

Tropical Cyclone "Burevi" formed on December 1, 2020, in the Bay of Bengal as the 5th named storm of the 2020 North Indian Ocean cyclone season. The cyclone is forecast to continue intensifying before it makes landfall in northern Sri Lanka on December 2...

About half the population of southern Madagascar or 1.5 million people is suffering from drought-driven hunger, the UN World Food Program (WFP) reported on November 30, 2020. Three straight years of drought have eradicated harvests and hampered people's access...

Thousands of homes have been damaged and more than 26 000 people affected by severe floods in the Serdang Bedagai Regency of North Sumatra, Indonesia over the past couple of weeks. Floods in the region began mid-November and worsened on November 23. The worst...

A powerful storm swept through the U.S. East Coast on Monday, November 30, 2020, leaving more than 230 000 customers without power in the region. The storm system brought damaging winds and heavy rains, downing multiple trees and power lines and producing several...