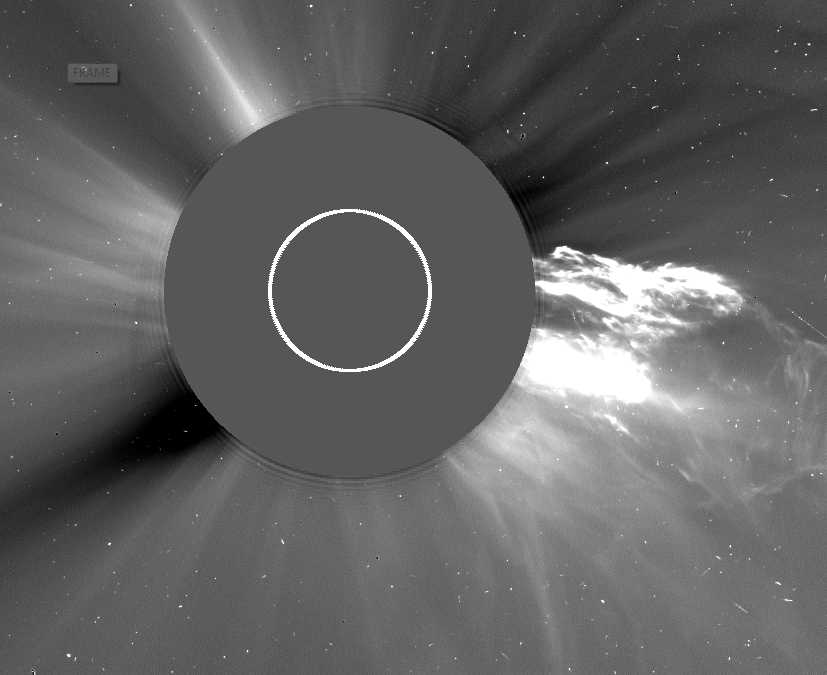 On June 7th at 0641 UT, magnetic fields above sunspot complex 1226-1227 became unstable and erupted. The resulting blast produced an M2-class solar flare, an S1-class radiation storm, and an unbelievable movie:

Much of the plasma thrown up by the blast simply fell back to the sun–indeed, that’s what makes the footage so dramatic. In the movies you can see blobs of hot gas as large as Earth making bright splashes where they hit the stellar surface. Some plasma, however, reached escape velocity and left the sun in the form of a coronal mass ejection: movie. Traveling faster than 1100 km/s, the CME should deliver a glancing blow to Earth’s magnetic field during the late hours of June 8th or June 9th. High-latitude sky watchers should be alert for auroras when the CME arrives. 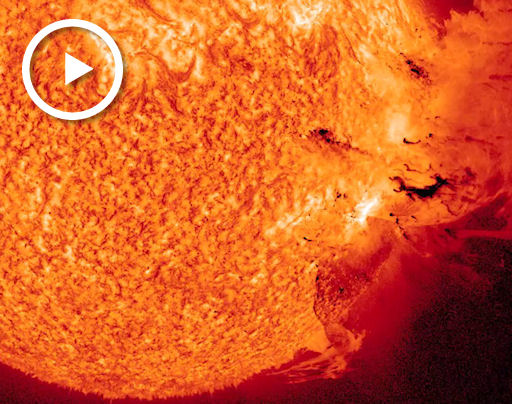 A video with commentary from solar physicist C. Alex Young of NASA’s Goddard Space Flight Center shows material splashing back to the stellar surface. “I’ve never seen material released this way before,” he says in the video. “It looks like someone kicked a clod of dirt in the air–an amazing, amazing event.”

Coronagraphs onboard the Solar and Heliospheric Observatory (SOHO) are still monitoring the CME as it billows away from the sun. Watch the cloud expand. The speckles are caused by energetic charged particles hitting the camera’s CCD array. This is what we mean by a “radiation storm”; the particles were accelerated by the explosion and are now peppering Earth-orbiting satellites and spacecraft like SOHO.

Although the blast was not squarely Earth-directed, it will affect our planet. The CME should deliver a glancing blow to Earth’s magnetic field during the late hours of June 8th or June 9th. High-latitude sky watchers should be alert for auroras when the CME arrives.

Just when things were very quiet, a M2.5 Solar Flare took place at 06:41 UTC Tuesday around Sunspot 1226 located in the southern hemisphere. A bright CME was associated with this event. Click on this LINK to view a movie of the Coronal Mass Ejection. It does not appear to be fully earth directed, however a portion of it could cause minor geomagnetic storming should it sweep past earth. An aurora watch is in effect for June 9 and 10. 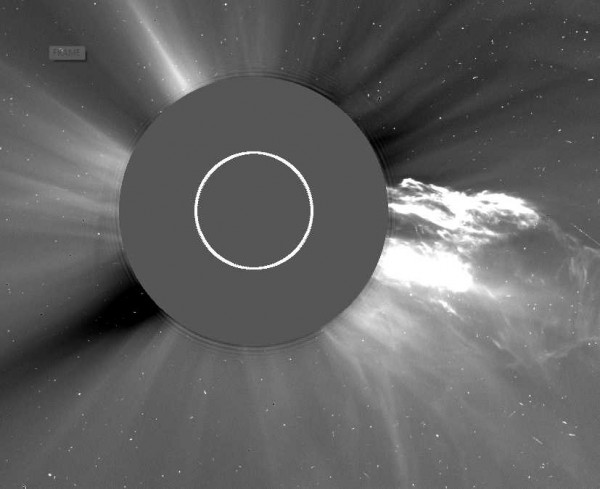 Click HERE for a before and after image of Sunspot 1226 captured by Ron Cottrell. Notice what appears to be a solar filament is now missing. (SolarHam)

Solar activity has been at moderate levels for the past 24 hours. Region 1226 (S21W64) was the most active and produced the largest event of the period, an M2/2N flare at 07/0641Z. Associated with this event was a Type II radio sweep, a Type IV radio sweep, a Tenflare of 720 sfu, and a full halo asymmetric CME with an
estimated plane of sky speed of 1155 km/s. Region 1226 had previously produced only low level x-ray events and has lost most of it spots and magnetic complexity after the M-flare. The other regions on the disk remained stable and quiet.

The geomagnetic field is expected to be at quiet levels on day one (08 June) and on the beginning of day two (09 June). Midday on day two, active to minor storm levels are expected as the CME, associated with todays M2/2N flare from Region 1226, becomes geoeffective. With the arrival of this CME, there is a slight chance for major storm periods at high latitudes. On day three (10 June), as the effects of the CME continue, active levels, with chance for minor storm periods, are also expected.

Now with the benefit of more information and model input, the prediction for Geomagnetic Storm activity has been revised. The models have the trajectory of the CME to pass Earth with just a glancing blow, now expected to occur around 1200 UTC on June 9. Expect primarily G1 (minor) NOAA Scale levels then, and for the storm to persist for 24 hours. The intensity of the Solar Radiation Storm is expected to be little affected by the passage of the CME-driven shock.