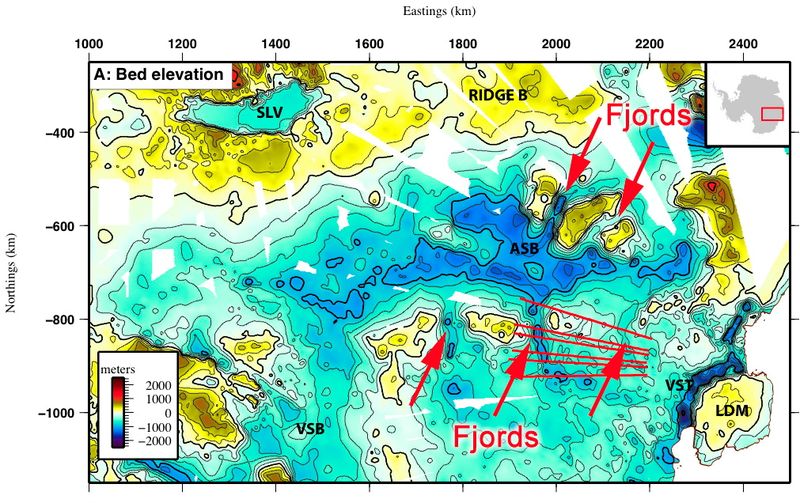 Employing new ice-penetrating radar over a key area of Earth’s largest body of ice, scientists are able to see a vast expanse of mountainous terrain and fjords that were carved by flowing glaciers when sea levels were some 200 feet higher than today.

The shape of this landscape beneath a broad region of the East Antarctic Ice Sheet known as the Aurora Subglacial Basin is critically valuable to researchers trying to figure out how quickly – and when –  the ice burying this land will respond to rising air and sea temperatures in a warming world. The fjords reveal how disruptions related to ice here could dramatically affect global sea levels, the researchers said.

A team of scientists from the United States, the United Kingdom and Australia made the discovery at the East Antarctic Ice Sheet, the largest area of ice in the world. To shed light on how the ice sheet formed and evolved, researchers wanted to probe its bedrock for details of how it channeled the ice and how the ice, in turn, shaped it.

“The history of Antarctica and its ice is bound up tightly with the global history of Earth, especially on the timescales of human evolution,” said researcher Duncan Young, a geophysicist at the University of Texas in Austin. 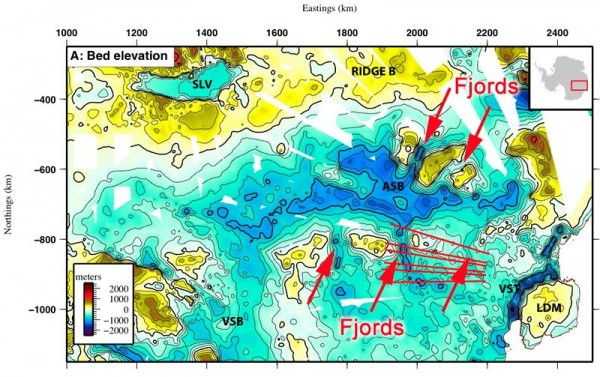 One of Earth’s last unknowns

Their research involved extensive use of ice-penetrating radar mounted on a DC-3 airplane, which flew out of Australia’s Casey Station on Antarctica to scan more than a mile of ice within the Aurora Subglacial Basin in the East Antarctic.

The radar uncovered a previously unknown mountain range, now hidden by ice, that once helped block ice flow. Cycles of glaciers then acted like bulldozers, carving a series of valleys deep into these mountains, each about 30 miles (50 km) wide, creating a fjord landscape similar to that seen today in East Greenland or Norway.

The tumultuous history of the area, suggested in past analyses of ocean sediments, is now seen carved into the rock of East Antarctica. This turbulent phase in ice sheet history likely took place about 34 million years ago, as the ‘hothouse’ Earth of the dinosaurs, early mammals and Gondwanaland gave way to the ‘icehouse’ Earth of dispersed continents, sweeping grasslands and distinct frozen polar regions.

Melting: past and future

These findings help reveal how this ice can move and influence sea level. Although the East Antarctic Ice Sheet is unlikely to undergo dramatic melting as the ice there is currently very cold, high and reflective (which further keeps it cool), their research found that much of its bedrock lies far below sea level and so could rapidly lose ice to the ocean.

Enhanced flow of the ice could have a major effect on sea level. Ocean sediments indicated 30 to 50 feet of sea level change out of Antarctica even during times of low carbon dioxide.(OurAmazingPlanet)