Russia’s Bezymianny Volcano erupted vigorously on the morning of April 14, 2011. At the time of the eruption, the Joint Air Force & Army Weather Information Network reported ash at an altitude of 25,000 feet (7,600 meters) above the volcano. This natural-color satellite image (top) shows evidence of the size of the eruption. Dark volcanic deposits (likely a combination of pyroclastic flows and lahars) extend more than 7.3 kilometers (4.5 miles) into valleys to the southeast. A light-colored plume of ash, steam, and sulfur dioxide rises above Bezimianny’s summit and blows towards the west. Volcanic ash covers the upper slopes of the volcano, especially to the south and west. White snow, still deep in late April, blankets the surrounding landscape. 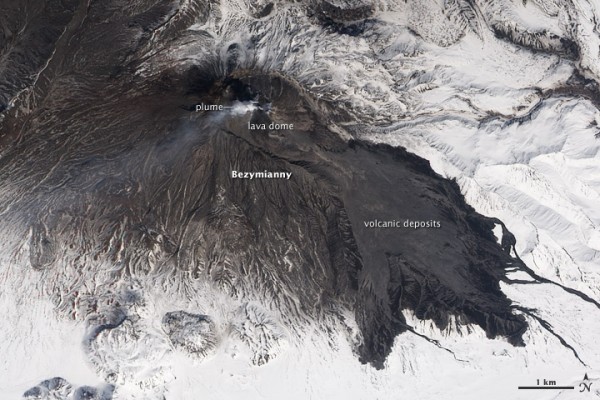 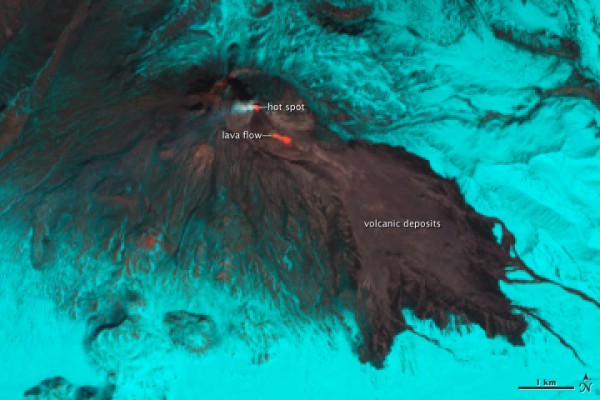 A false-color image (lower) reveals more features on the active volcano. At the summit, a red “hot spot” may indicate where fresh lava is being extruded from the lava dome. To the southeast, an active lava flow appears as a similar hot spot. In these wavelengths, bare rock and ash are gray, and snow and ice appear cyan. These images were acquired near noon on April 22, 2011, by the Advanced Land Imager (ALI) aboard the Earth Observing-1 (EO-1) satellite. (EarthObservation)