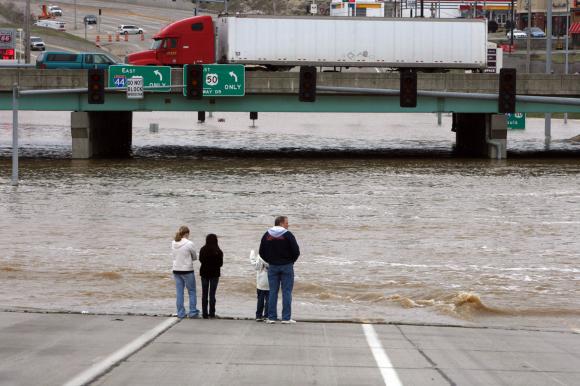 Waters continued rising in April 2011 in the U.S. Midwest, according to a NASA statement. On April 13, the Advanced Hydrological Prediction Service (AHPS) of the U.S. National Weather Service warned of flooding along the Mississippi and Wisconsin Rivers. The AHPS reported major flooding of the Wisconsin at Portage, and varying degrees of flooding at many locations along the Mississippi, including Muscatine and Gladstone. 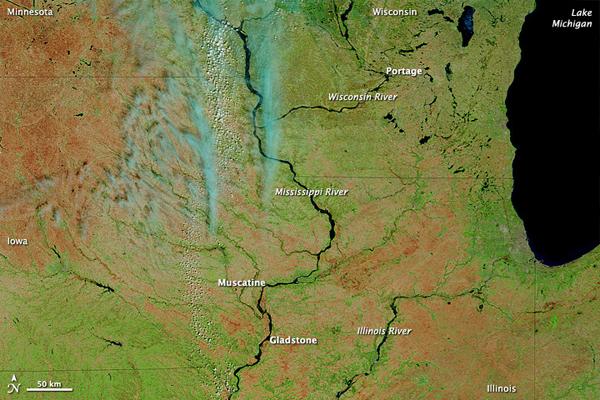 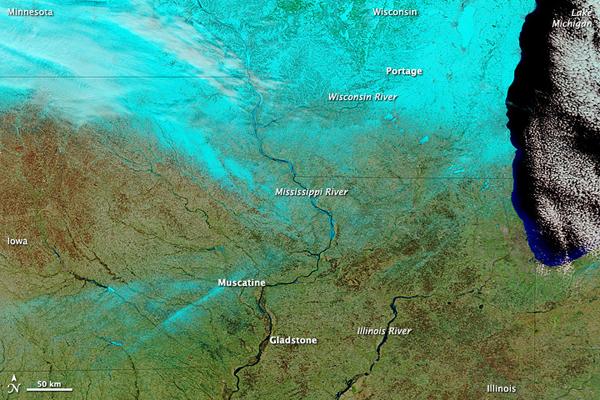 The Moderate Resolution Imaging Spectroradiometer (MODIS) on NASA’s Terra satellite acquired these images on April 12, 2011 (top), and March 2, 2011 (bottom). Both images use a combination of infrared and visible light to increase the contrast between water and land.

Snow is turquoise; water is navy; and iced-over water bodies are bright blue. Clouds range in color from blue-green to nearly white. Vegetation is green and soil is earth-toned. The redder hues in the April image may result from the angle of the satellite sensor.

Snow blankets roughly the northern third of the area in early March, and ice appears along the Mississippi River. Several weeks later, the snow has disappeared, and the Mississippi has widened downstream. Nearly invisible in early March, the Wisconsin River is easily identified in April. The Illinois River, in contrast, appears to show little change. (OurAmazingPlanet) 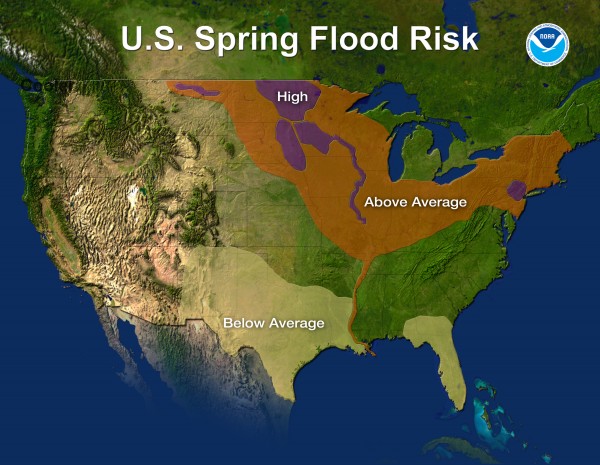 Overland flooding in the Red River Valley spread to previously unseen lengths and depths Monday, isolating hundreds of rural homesteads and closing long stretches of roads on both sides of the Minnesota-North Dakota border. High water in the Red River, which crested at Fargo-Moorhead Saturday, has been causing tributaries to back up and flow across the region’s flat landscape.

“It’s totally new, these kinds of depths of water,” said Clay County Sheriff Bill Bergquist, who’s lived his whole life in the Fargo-Moorhead area. “It’s become more of an emergency, because a lot of these people didn’t pre-plan. Some of them never had to sandbag before.”

The extended flooding has closed a 40-mile stretch of Interstate 29, which parallels the border between the states. On the Minnesota side, 100 miles of roads are closed in Clay County. The U.S. Army Corps of Engineers was raising a permanent dike around Hendrum, Minn., by 2 extra feet Monday to help hold off water from the nearby Wild Rice River, which was rising rapidly. Nearly 300 Minnesota National Guard soldiers are patrolling levees along the Red River.

The U.S. Geological Survey measured a record flow Sunday on the Sheyenne River, just north of Fargo. Small cities in that area are experiencing worse flooding than they did during the record floods of 1997 and 2009. The crest at Fargo-Moorhead was the fourth-highest ever. The river was down about 6 inches Monday afternoon and is expected to drop a little more than 2 feet over the next week. But the Weather Service has raised the predicted crest for Grand Forks and East Grand Forks, Minn., by a foot because of heavy rain Sunday feeding the Red Lake River, a key tributary. That crest, expected Friday, would be second only to the devastating flood of 1997, but 8 feet below the level of permanent levees built since then. 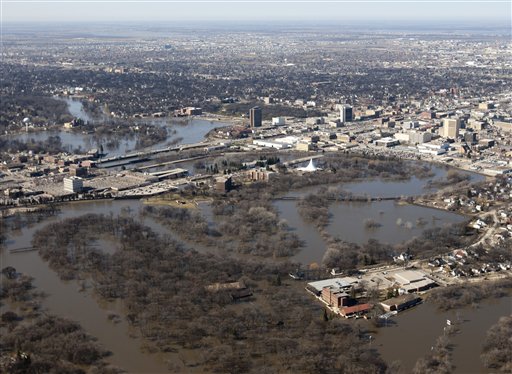 Water was running 8 inches deep across Interstate 29, from north of Fargo to Hillsboro, and state officials said it could remain closed for several more days. To the east in Minnesota, Hwy. 75 was closed in several spots between Moorhead and East Grand Forks, as was the Demers Avenue bridge between the downtowns of East Grand Forks and Grand Forks, N.D.

The Corps of Engineers closed the lock and dam on the Mississippi River at Alma, Wis., due to debris and high water, effectively shutting down commercial barge traffic for several days. In the metro area, the Stillwater Lift Bridge remained closed. But flood pressure was easing in St. Paul, South St. Paul and Scott County.

The water still lapped close to the Harriet Island boathouse Monday, meaning the city-controlled park isn’t likely to open soon. After the water does go down, there is likely to be lots of debris to clean up. (StarTribune) 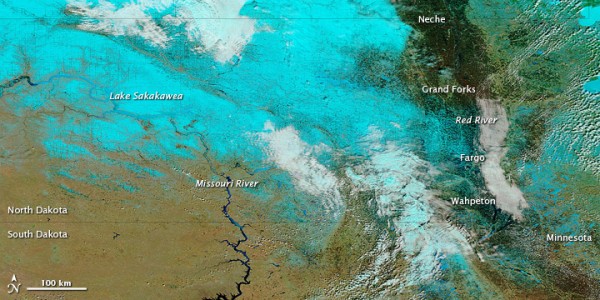 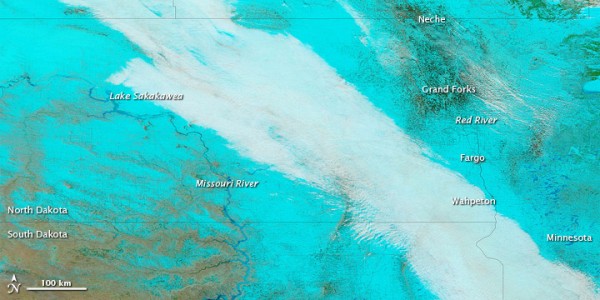 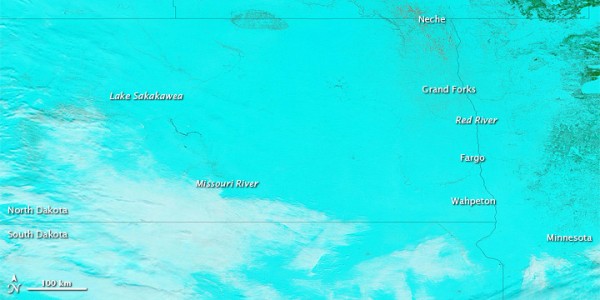 Spring flooding affected multiple cities along the North Dakota-Minnesota border in early April 2011, as winter snow continued to melt. The Advanced Hydrological Prediction Service (AHPS) of the U.S. National Weather Service reported major flooding at Wahpeton, Fargo, and Grand Forks, among others. Major flooding also occurred along the Pembina River at Neche, the AHPS stated. The Associated Press reported that, after April 9, 2011, flood-mitigation efforts shifted north of Fargo, to rural areas along the north-flowing Red River.

The Moderate Resolution Imaging Spectroradiometer (MODIS) on NASA’sTerra satellite acquired these images on April 6, 2011 (top), March 18, 2011 (middle), and March 7, 2011 (bottom). The images use a combination of infrared and visible light to increase the contrast between water and land. Snow is bright turquoise. Water is navy. Ice-covered water bodies are bright blue. Vegetation is green. Soil is earth-toned. Clouds are nearly white.

A snowy blanket covers most of the region in early March, with just a few curves of the Missouri River interrupting the snow. By mid-March, the snow has begun a significant retreat. By early April, the snow has retreated to north of the North-South Dakota border.

The Red River partially delineates the boundary between North Dakota and Minnesota. Along the river valley (including Grand Forks, Fargo, and Wahpeton), the ground is mostly a dull green-brown in early April. The dark tones may result from saturated soils and/or standing water. (A high-resolution image sequence documents rising waters around Fargo between late March and early April.)

In the west, ice lingers on Lake Sakakawea and part of the Missouri River. Well north of the North-South Dakota border, however, the river appears ice-free. (EO)