Hundreds of dead starfish wash up on Talybont beach, UK

Several hundred dead starfish have been found washed up on a north Wales beach and it comes following the discovery at Talybont, between Harlech and Barmouth in Gwynedd. Authorities reveal that its common for starfish to be washed ashore during spring tides but it was not clear why they had migrated so far up the shoreline. 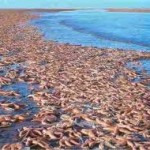 Common starfish - found around the UK coast - feed on mussels and other crustaceans and while there is no clear reason why the starfish migrated so far along the coast he felt one reason could be a shortage of food. The starfish bodies are not harmful and will probably be eaten by seagulls.(BBC)

The Common Starfish or Common Sea Star (Asterias rubens) is the most common and familiar starfish in the north-east Atlantic and Indian Ocean. It has five arms and usually grows to between 10–30 cm across, although larger specimens (up to 52 cm across) are known. The Common Starfish is usually orange or brown, and sometimes violet; deep-water specimens are pale. The Common Starfish is to be found on rocky and gravelly substrates. It reproduces sexually. Starfish can be found in rock pools and on beaches. The habitat varies and includes coarse and shelly gravel and rock. Abundance increases markedly on algal carpets as compared with fine sand. The common starfish is unusual in that it tolerates estuarine habitats. Its habitat range extends offshore for 400m. Common starfish are not listed as endangered on IUCN Red List. 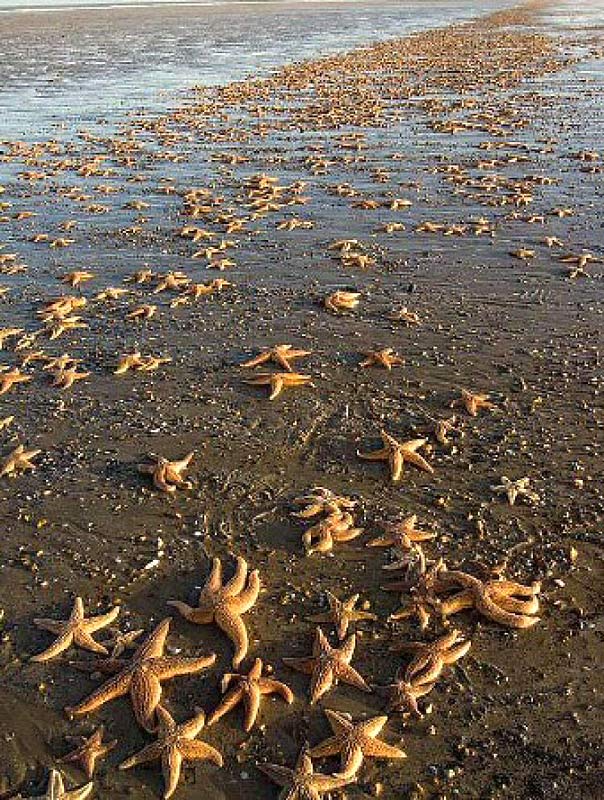