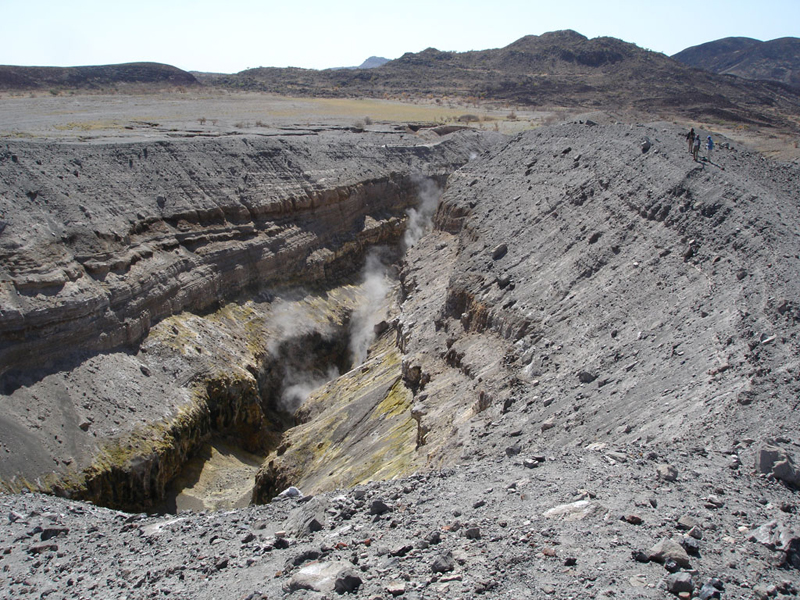 Seismic activity is tearing Africa apart. The African and Arabian plates meet in the remote Afar desert of Northern Ethiopia and have been going through a rifting process—at a speed of less than 1 inch per year—for the past 30 million years. This rifting formed the 186-mile (299337.984meters) Afar depression and the Red Sea. The mystery of how continents break up could be solved with clues from the rifting earth of Ethiopia.

In September 2005, a chain of earthquakes caused hundreds of deep fractures.. In some spots the ground shifted some 26 feet (7,9 meters) and magma, enough to fill a football stadium more than 2000 times, was injected into a crack between the two plates. The process that created the rift in the Afar region in 2005 is also at work in the Red Sea. The international team studying the rift have come to conclude that the process that created the crack is also the process that creates similar rifts in the ocean floors. The crack formed when Dabbahu volcano erupted in 2005. Volcanic eruptions in the Afar region continue to this day. The region is also a hotbed of study for scientists from all around the world.

The Afar region is known for being the place where the remains of Lucy were found. It is home to two volcanoes, and is said to be the hottest place on earth. The region regularly experiences drought. (::)

Since the 1960s, scientists have known that over the course of millions of years, Earth’s continents break up as they are slowly pulled apart by the planet’s tectonic forces. As part of the same mechanism, new oceanic crust forms at volcanic seams along the ocean bottom, slowly spreading out and creating an ever wider ocean. However, the specifics of how such earth-shattering developments take place have often eluded scientists, as the details at the borders of continental and oceanic crust are often buried beneath thick layers of volcanic and sedimentary rocks, and the tectonic activity that marked the breakup has ceased.

An ideal place to analyze continental breakup step by step is Ethiopia, where the ongoing rifting of Arabia from Africa began from about 26 million to 29 million years ago and continues to this day. Researchers there can see continental rifting toward the south and seafloor spreading farther northward all out in the open. Scientists analyzed the timing and spatial distribution of magmatic and tectonic activity in Ethiopia over the last 30 million years, with a focus on the most recent 5 million years.

The researchers found that during the early stages of continental breakup, the injection of molten rock into the crust and below Ethiopia allowed tectonic plates to move apart without much thinning of the crust, as this magma helps add to it. This prolonged span of activity is now being followed by stretching and thinning of the tectonic plate, allowing massive lava eruptions at the surface and sinking of the land below sea level.

The findings of the work could not only help scientists understand what is going on in this area, but could also shed light on the rifts of continents in the past. The scientists detailed their findings online March 13 in the journal Nature Geoscience.

http://www.ouramazingplanet.com/rifting-of-ethiopia-unearths-clues-to-continents-1235/
It only took days for a giant crack to form in Afar Ethiopia (DigitalJournal)
Geologists Watch as African Continent is Torn Apart (LiveScience)
The protracted development of the continent–ocean transition in Afar (NatureGeoScience)
Afar Rift Consortium