The Alaska Volcano Observatory (AVO) has observed a change from the long-term deformation pattern at Okmok volcano as measured by two continuous Global Navigation Satellite Systems (GNSS) stations within the caldera between September and November 2021.

The deformation pattern at Okmok typically consists of near-continuous inflation, with episodes during which this motion accelerates, and is generally thought to be related to magma injection somewhere between 2 – 4 km (1.2 – 2.5 miles) below the caldera floor.

In contrast, the changes that AVO observed recently are consistent with a pressure increase at a shallower depth – less than 1 km (0.6 miles) below the caldera floor. The map location of this new deformation source is near Cone D, just south of the young tephra cone Ahmanilix, created during the 2008 eruption.

The deformation has since returned to background levels.

There have been no notable changes in seismic activity during this time period, and satellite images have shown no surface changes.

While recently observed deformation is consistent with a small intrusion of magma at a shallow depth, other non-magmatic processes such as hydrothermal activity cannot be ruled out.

If the deformation was caused by a shallow magma intrusion, this may increase the likelihood of an eruption.

Previous eruptions at Okmok have occurred with little precursory seismic activity, and AVO continues to monitor the volcano closely.

Okmok has had several eruptions in historical time typically consisting of lava flows crossing the caldera floor, such as in 1945, 1958, and 1997.

However, in 1817, the volcano produced an explosive eruption that resulted in ashfall in the Dutch Harbor area.

Okmok last erupted in July – August 2008, producing continuous ash emissions that fluctuated between about 1 500 and 9 000 meters (5 000 and 30 000 feet) above sea level for the 5-week duration of the eruption, with an initial plume height of 15 000 meters (50 000 feet) during the first 12 hours. This eruption resulted in the construction of a new cone (Ahmanilix) within the caldera. 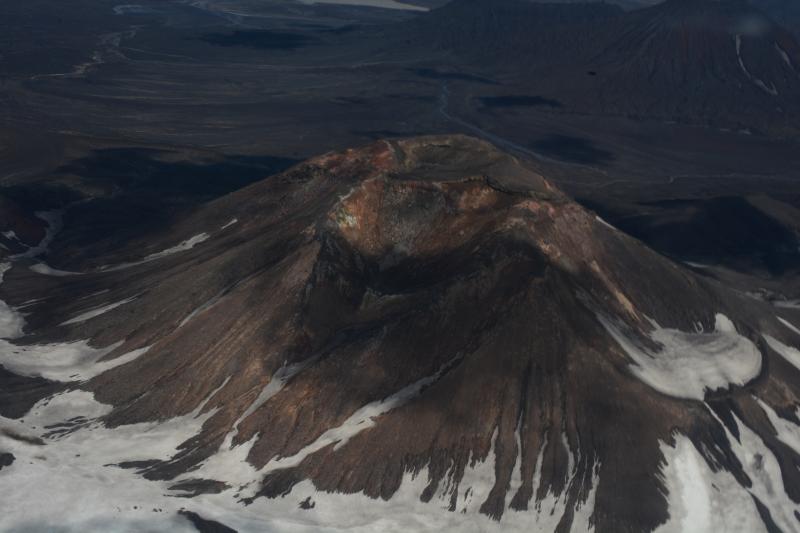 A study published last year in Proceedings of the National Academy of Sciences of the United States of America suggested that the massive eruption at Okmok in 43 B.C.E. may have caused a nearly two-decade power struggle that led to the fall of the Roman Republic and the rise of the Roman Empire. According to records, the period was marked with unusually cold weather, widespread famine, and strange sightings in the sky.2

"To find evidence that a volcano on the other side of the Earth erupted and effectively contributed to the demise of the Romans and the Egyptians and the rise of the Roman Empire is fascinating," said lead author Joe McConnell of the Desert Research Institute (DRI) in Reno, Nevada.

"It certainly shows how interconnected the world was even 2 000 years ago," McConnell added.

The researchers noted that the eruption may also be linked to the unusual atmospheric phenomena mentioned in records, like solar halos, the Sun darkening, or the three suns. The authors added that many of these observations happened before the Alaskan eruption, and may be related to the smaller eruption of Mount Etna in 44 B.C.E.

The broad, basaltic Okmok shield volcano, which forms the NE end of Umnak Island, has a dramatically different profile than most other Aleutian volcanoes. The summit of the low, 35 km (22 miles) wide volcano is cut by two overlapping 10 km (6.2 miles) wide calderas formed during eruptions about 12 000 and 2050 years ago that produced dacitic pyroclastic flows that reached the coast.

More than 60 tephra layers from Okmok have been found overlying the 12 000-year-old caldera-forming tephra layer.

Numerous satellitic cones and lava domes dot the flanks of the volcano down to the coast, including 1 253 m (4 110 feet) Mount Tulik on the SE flank, which is almost 200 m (656 feet) higher than the caldera rim.

Some of the post-caldera cones show evidence of wave-cut lake terraces; the more recent cones, some of which have been active historically, were formed after the caldera lake, once 150 m (330 feet) deep, disappeared. Hot springs and fumaroles are found within the caldera.

Historical eruptions have occurred since 1805 from cinder cones within the caldera. This volcano is located within the Aleutian Islands, a UNESCO Biosphere Reserve property.3

2 Massive eruption at Alaska's Okmok volcano in 43 B.C.E. linked with cold weather, widespread famine, strange sighting in the sky and the fall of Roman Republic – The Watchers