This is the strongest of numerous earthquakes recorded in the region after the eruption of a nearby Nyiragongo volcano on May 22, including M3.3, M3.7, M4.0, M4.4, and M4.7.

Tremors are shaking the region every 10 to 15 minutes.

According to the Rwanda Mines, Petroleum and Gas Board (RMB; Rwanda Seismic Monitor) the earthquakes are located mainly in the Rubavu and Cyanzarwe sectors and are felt in different parts of the country. 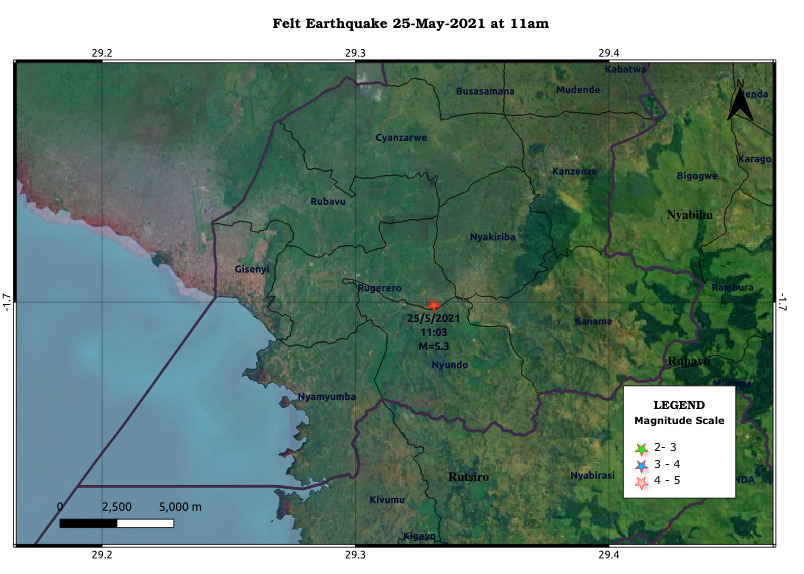 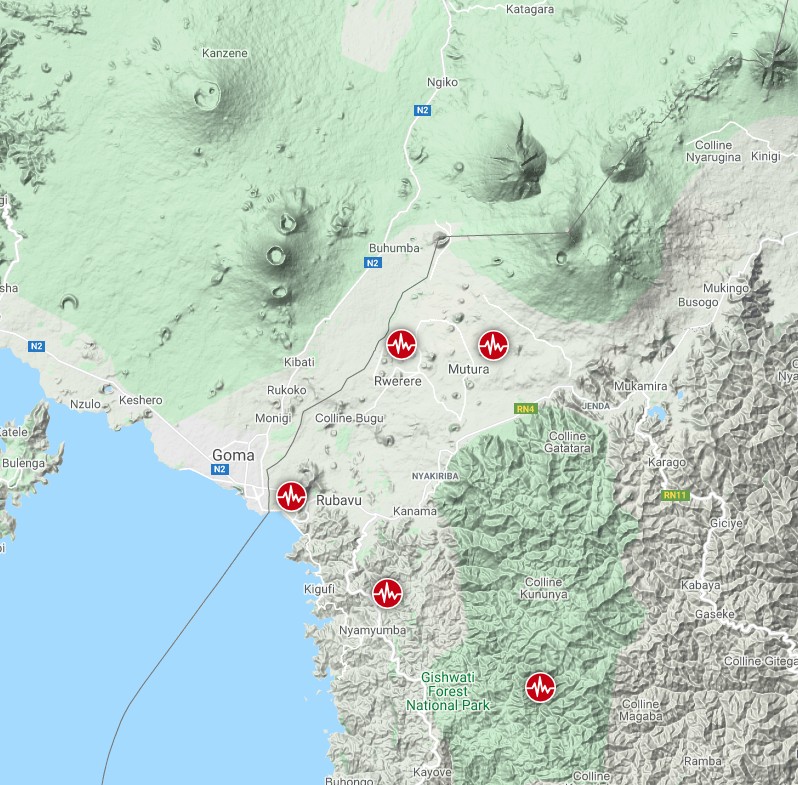 "Such earthquakes are called volcano-tectonic earthquakes and are produced by vibrations generated by the movement of magma within the volcano. Pressure beneath the surface of earth increases and the surrounding rock fails, creating small successive earthquakes," said RMB seismologist Tite Niyitegeka.

"Prior to the eruption, no seismic earthquakes (swarms) or other seismic anomalies were recorded. Seismic activities in the range of magnitude 2.5 to 4 ML were only observed since the start of the eruption of the volcano and they grew in frequency an hour after eruption with epicenters located in Rubavu District, Cyanzarwe and Rubavu Sector."

The lava reached and stopped flowing 1 km (0.62 miles) away from Goma Airport, which is 1 km away from the border of Rwanda (Rubavu district).

Nyiragongo is one of the eight volcanoes of Virunga Massif. The seven remaining are:  Nyamuragira, Mikeno, Karisimbi, Bisoke, Sabyinyo, Gahinga and Muhabura. This range of volcanoes is one of the ranges that are lying inside the East African Rift System (EARS). Only Nyamuragira and Nyiragongo are active.

In addition to earthquakes, cracks are now appearing around the volcano, including in Goma and Rwanda's Rubavu District. The same phenomenon was occurring after previous eruptions of Nyiragongo in 1977 and 2002.

Nyiragongo erupted on May 22, 2021, producing two long lava flows — one toward the city of Goma, DR Congo, and the other through an uninhabited area toward Rwanda, forcing an estimated 25 000 people to evacuate.

As of May 25, the death toll rose to 32 and is expected to continue growing. At least 9 of them died in traffic accidents while trying to flee and 7 from inhaling toxic gas while walking across a wide expanse of the cooling lava.

ICRC delegation in Goma said lava had destroyed 4 large villages and damaged 12 others — between 9 000 and 2 500 dwellings were destroyed.

"The lava has stopped on May 23, but there have been repeated earthquakes since the eruption and the lava lake in the volcano's crater appears to have refilled, prompting fears of new fissures opening or another eruption," the UN's refugee agency said.