A major winter storm fueled by an atmospheric river unleashed damaging mudslides in Northern California on Thursday, January 28, 2021, after dumping heavy snow and downpours to the region over the past days. The threat of flash flooding continues into Friday morning, January 29, as the storm persists in Central California and through the day in Southern California, the National Weather Service (NWS) warned.

As of Thursday afternoon, the NWS recorded at least 16 mudslides in the storm's onslaught, seven of which were in Monterey. Most of the slides were triggered by loosened soil in burn scar areas left by the active wildfire seasons.

About 4 000 people or 75 percent of residents in the area were under evacuation orders, said deputy fire marshall, Dorothy Priolo.

About 25 structures were damaged in the county, while one woman sustained injuries as she attempted to escape her home during a mudslide. The victim was soon treated for non-life-threatening injuries at a local hospital and has since been discharged.

Priolo added that much of the damaged structures were ranch-style properties, "so even if the home was not affected, in some cases, other buildings on the property may have been."

It doesn’t look like Highway 1 will fully reopen in the southern Big Sur area tomorrow. pic.twitter.com/ECJ1v8PVgj

Video from late this afternoon of the still worsening debris/mudflow event south of Salinas along River Road. It is still raining pretty good with many hours of rain left. #CAwx #mudflow #California pic.twitter.com/4jQDwTseJM

Second #horse rescue complete! Both horses are evaluated by a #veterinarian and @SPCAmc after being lifted out of #RiverFire area mudflow & rain in a pen on River Road, Salinas. Thanks to the #AlamedaCounty firefighters & heavy equipment operator who assisted @mcrfd resident! pic.twitter.com/xtbJWSvPlg

Debris Flow over off River Road where the River Fire burned this summer.

Monterey County has no report on number of slides but says 2,400 structures and 7,900 residents were in evacuation areas. Flash Flood Watch in effect for Carmel Dolan and River Fire burn scars. pic.twitter.com/rWma79R36b 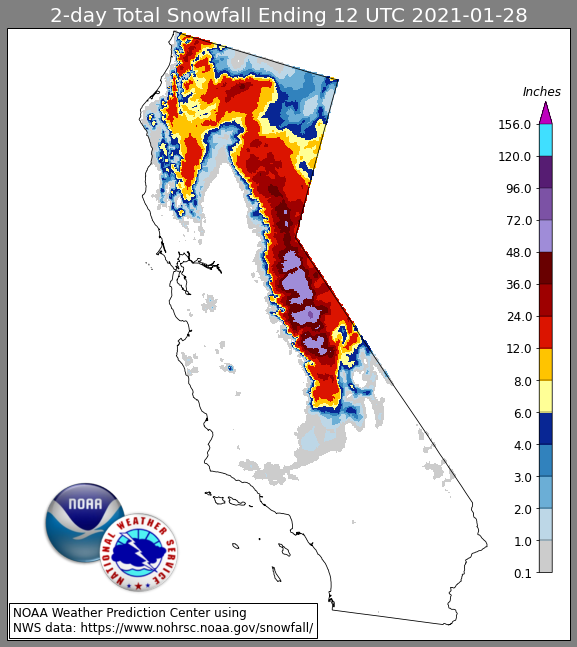 Rain and heavy snow are expected to continue over the weekend, with the possibility of flash and urban flooding.

The storm will persist through the morning in Central California and through the day in Southern California, according to NWS. Lingering snow showers will remain throughout the Great Basin and Intermountain West.

Late Friday into Saturday, coastal rain and higher elevation snow will develop over parts of the Pacific Northwest and Northern California.

The major winter storm that's impacted California this week will transition today through the Intermountain West with some mountain snow.

The storm system will arrive into the Midwest on Saturday, January 30, and a swath of heavy snow is expected to develop from the Corn Belt to the Ohio Valley, which includes the Chicago metro area.

By Sunday and early next week, the system may become a potential Nor'easter.