A deep depression that crossed Andhra Pradesh coast near Kakinada on Tuesday, October 13, 2020, brought unprecedented rainfall over Hyderabad, capital of the Indian state of Telangana, from Tuesday night to Wednesday morning, claiming the lives of at least 13 people. Authorities are urging residents to stay indoors and remain cautious as more heavy rainfall is expected in the days ahead. Meteorologists said the rains that hit the region are rare and unseasonal.

According to the India Meteorological Office, Ghatkesar on the city outskirts received record rainfall of 322 mm (12.6 inches) from Tuesday night to Wednesday morning. This is the heaviest rainfall the city has seen in more than a century.

The resulting floods submerged dozens of colonies in the city and its suburbs, forced authorities to deploy rescue boats and evacuate hundreds of people from their homes.

Local media reported hundreds of vehicles stranded on the Hyderabad-Vijayawada highway. Traffic was slow or brought to a standstill on the Hyderabad-Bengaluru highway and toward Hyderabad Airport at Shamshabad.

Some parts of the city were without power for over 12 hours, TWC India reports.

According to local media reports, 9 people were killed and 3 others injured when a wall collapsed and fell on two houses in Bandlaguda in the old city of Hyderabad. 2 people drowned and 2 others went missing in the Gaganpahad area in Shamshabad on the outskirts of Hyderabad. 2 more persons were feared killed in Abdullahpur, also on the outskirts. 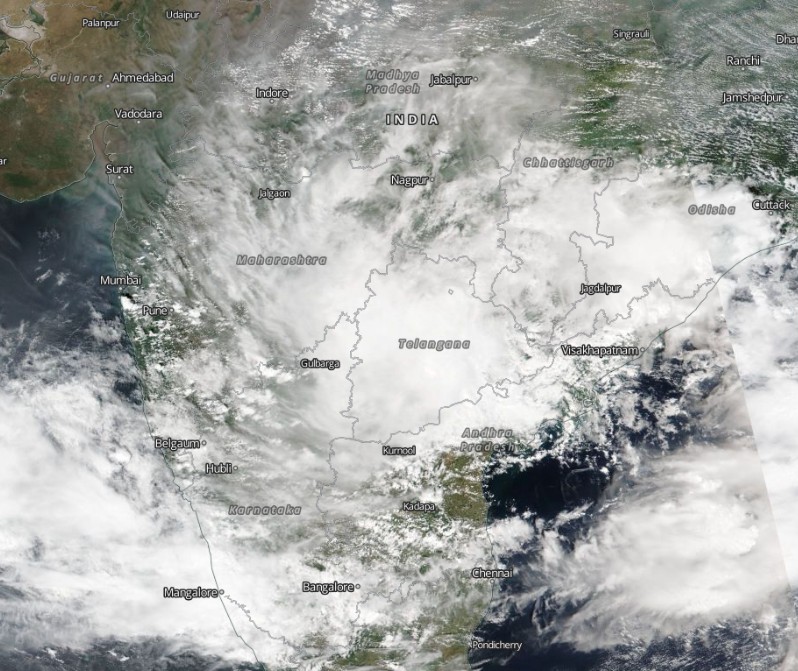 The system responsible for record rainfall over Hyderabad is expected to continue moving in a WNW direction towards Maharashtra and will get weaken further into a low pressure area before the end of the day.

Rain activities will increase over most parts of Marathwada, adjoining part of Vidarbha, and over many parts of Madhya Maharashtra. Rains will start subsiding over Marathwada by the evening of October 14 (LT) as the low pressure area will move further westwards toward Konkan and Goa. On October 14 and 15 many parts of Konkan and Goa including Mumbai may get intense rain and shower activities, SkymetWeather meteorologists warn.

"These rains are considered as unseasonal rains, particularly for Telangana and Maharashtra. However, Telangana sometimes receives moderate to heavy showers in the wake of depression of cyclones forming over the Bay of Bengal but for Maharashtra, these rains are rare and unseasonal."