Subtropical Depression Four has developed offshore of the northeastern U.S. late Monday afternoon, June 22, 2020, and intensified into Tropical Storm "Dolly" at 17:00 UTC on June 23 — the fourth named storm of the 2020 Atlantic hurricane season and the second-earliest fourth named storm on record. The storm is expected to become post-tropical on June 24.

A turn toward the northeast with an increase in forward speed is expected tonight and on June 24.

Weakening is forecast during the next day or so as Dolly moves over colder waters and becomes post-tropical.

The system, which is not expected to directly impact land, is forecast to pick up steam as it moves along the Gulf Stream, well off the coast of the U.S.' Eastern Seaboard.

Dolly's formation is far earlier than usual as the fourth named storm of the season usually does not take place until August 23.

Visible satellite imagery shows what the National Hurricane Center has classified as Subtropical Depression 4 spinning well offshore. This system will race to the northeast away from our area with no major impacts expected. #MEwx #NHwx pic.twitter.com/ZXA1YiLtb3

Steady and deep convection continues over Subtropical Depression #Four, however the system is unlikely to become a named storm per the latest NHC forecast. Still though, the chance is there, albeit lower than yesterday. By the end of today, development chances will likely end. pic.twitter.com/BjlTi1IybS 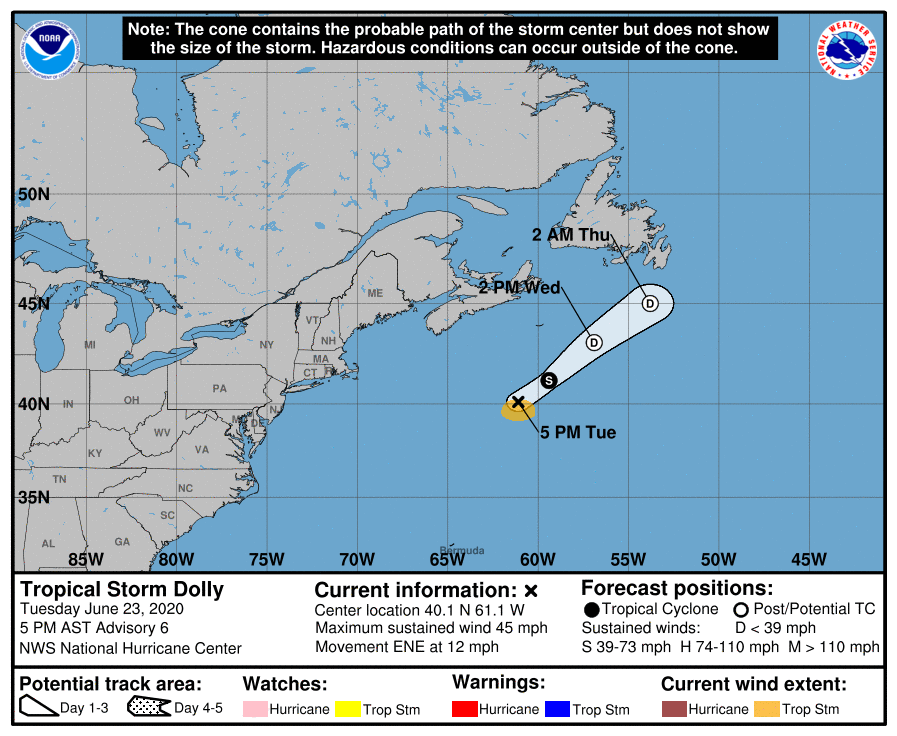 Records from the NHC show that June has only produced two other D-named storms, which were Debby from 2012 and Danielle from 2016.

However, it could result in rough seas and cause disruptions in shipping. "Once over much colder water starting later Tuesday, the depression will lose any tropical characteristics and once again become a non-tropical system."

In case you missed it yesterday afternoon, Subtropical Depression 4 was designated over the N Atlantic by @NHC_Atlantic! It is forecast to remain weak as it meanders off to the northeast over the next couple days. pic.twitter.com/Ajp7DhVsMd