A multi-day severe weather outbreak continues across the U.S. South, with destructive tornadoes, heavy rain, hail, and strong winds. The potent storm system is moving northeastward through Monday, causing a variety of weather hazards. At least 33 people have been killed, as of 08:00 UTC on April 14, 2020.

Numerous homes were destroyed and at least 11 people have been killed after destructive tornadoes touched down in Mississippi on Easter Sunday, April 12, forcing Gov. Tate Reeves to declare a state of emergency.

"This is not how anyone wants to celebrate Easter Sunday. The state and our first responders are working around the clock and will not rest until this is over. We are mobilizing all resources available to protect our people and their property," Governor Tate said.

Firefighters having to clear the roads to be able to get back to check for victims near Soso, MS. @weatherchannel #MSwx pic.twitter.com/kcCRqMA7UT

The vicious storms that have produced the tornadoes during the past hour #mswx pic.twitter.com/1UzxH0W80E

A state of emergency was also declared in Alabama and in Louisiana, after significant damage in Monroe, where about 300 homes were damaged or destroyed. While there were no immediate reports of major injuries, the damage is catastrophic.

"The images and reports of major tornado damage in the Monroe area are heartbreaking, and my prayers are with the people there. We are in contact with local officials in the area to provide support," Gov. John Bel Edwards said.

Monroe Regional Airport suffered extensive damage, forcing the cancelation of all flights until further notice. Airport director Ron Phillips estimated there was 25 to 30 million USD worth of damage to the planes in heavily damaged hangar owned by AVFlight.

LOUISIANA SEVERE WEATHER: A lot of structural damage being reported across Monroe from today’s severe weather. This is from a subdivision on Parkland Street. The Monroe Regional Airport also structural damage.

Back-to-back tornadoes moving across the same area!? These radar signatures are terrifying. Thinking of Southern #Mississippi today and everyone in the path of these particularly dangerous storms. #mswx @CNNweather @cnnbrk @cnn pic.twitter.com/9Pdt80AxJK

“By the grace of God, early reports show only a few minor injuries. Pray for our city! Many neighbors & friends suffered catastrophic damage. We are hurting; but not broken. Times like this remind us WE ARE STRONGER TOGETHER! Together we we will rebuild.“ – Mayor Jamie Mayo pic.twitter.com/sByzavTiTg

Three people were killed in Tennessee.

On the southern side, widespread thunderstorms are likely, and the atmospheric conditions are expected to be favorable for severe weather for the Lower Mississippi Valley, Tennessee Valley, and Southeast into Monday. Tornadoes, hail, and high winds are all potential severe threats, NWS forecaster Tate noted.

As rain amounts could exceed 50 mm (2 inches) in some locations, and there is the potential for training (storms repeating over the same location), flash flooding is another hazard just north of the highest severe weather threat, in the Tennessee Valley toward the Southern Appalachians.

Moderate Risks of both severe weather and flash flooding are in place through tonight. As the cold fronts sweep eastward toward the Eastern Seaboard, severe weather is once again a threat on Monday especially ahead of the initial cold front–an Enhanced Risk of severe weather has been outlooked for portions of the Southeast to Mid-Atlantic.

There could be isolated incidents of flash flooding in the Mid-Atlantic to Northeast, but rain and storms should be fast-moving, so the flooding threat should not be as widespread on Monday. 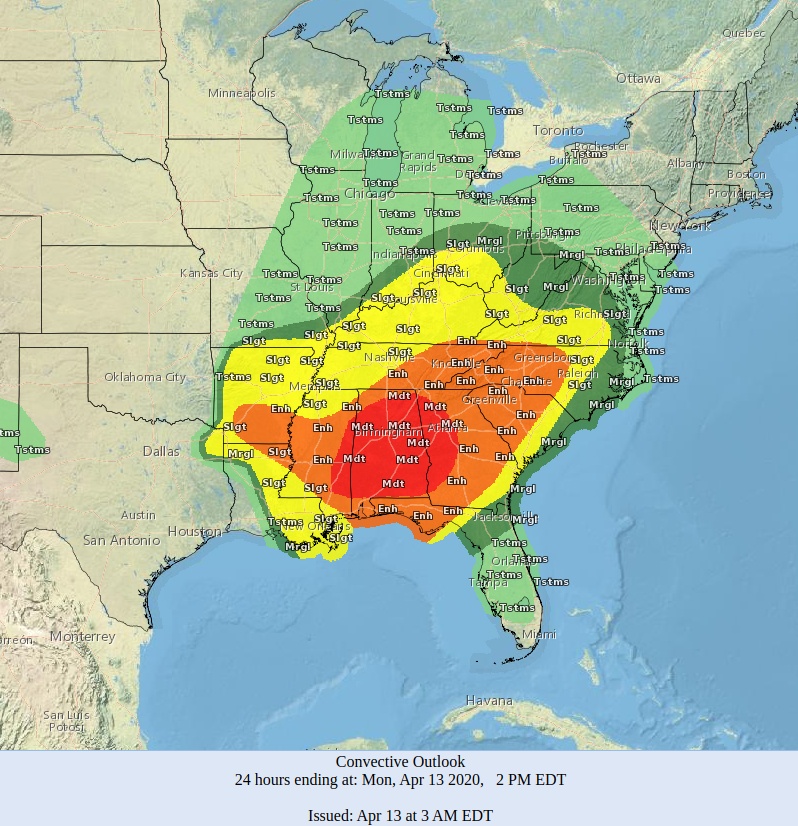 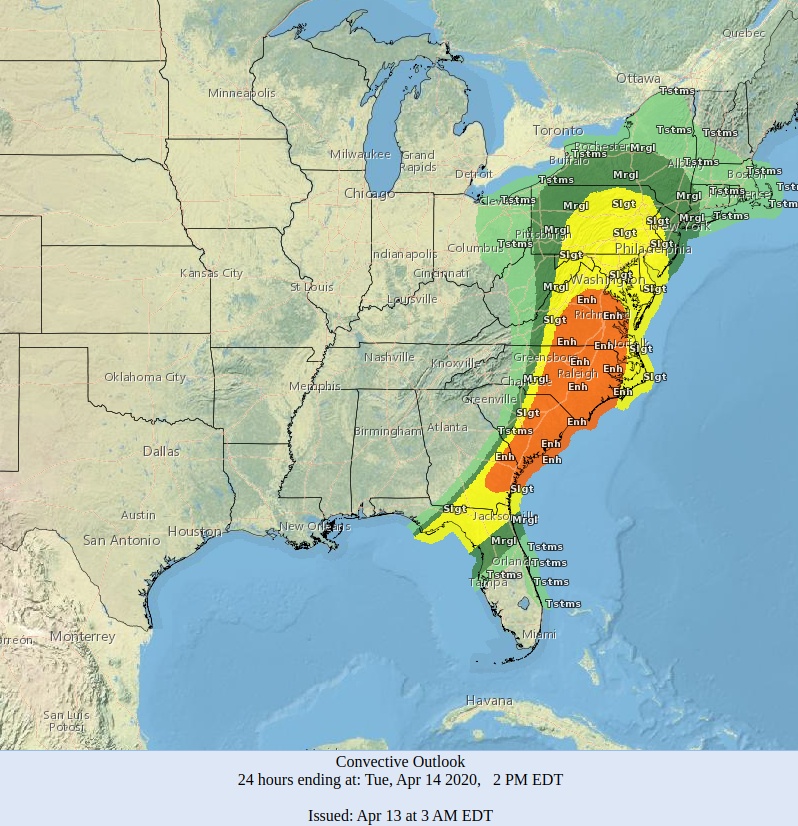