Researchers have discovered signals due to slow slip events with huge amounts of slip along the Nankai Trough subduction zone, southeast of Japan. The findings shed light on the marine sedimentary environment and plate tectonics of Nankai Trough and may help in informing earthquake disaster research.

People usually think that earthquakes are abrupt and last only for moments. However, movements of the tectonic plates are usually less sudden and more sustained, and slow earthquakes can actually go on for hours, months, or longer.

The researchers, led by the University of Tokyo, have discovered slow-motion interplate slip. Slow earthquakes such as these slow slip events are extremely hard to detect using conventional seismological techniques, particularly in offshore sites.

Over time, new methods have been developed to address this issue since understanding slow quake events is important for assessing the threats posed by further violent seismic events, such as megathrust earthquakes.

The scientists used a Global Navigation Satellite System-Acoustic ranging (GNSS-A) combination technique to detect changes in the absolute position of the seafloor.

"GNSS-A was first proposed in the 1980s but has really been developed and applied over the last two decades for [the] detection of slow earthquakes," according to the study's lead author, Yusuke Yokota.

"This method combines satellite detection of movements at the sea surface with undersea data from an acoustic ranging system, and can reliably detect deformation of 5 cm (2 inches) or more in offshore areas."

Slip sites, in general, were detected below the shallow undersea interplate boundary of the trough, next to regions with strong interplate coupling.

Their absence, however, may also support the probability that these are the main slip regions of Nankai Trough's megathrust zone.

"Differences in the features between these regions may be related to earthquake history and reflect different friction conditions," Yokota explained.

"Detailed understanding of these friction conditions and how they relate spatiotemporally to megathrust earthquake events is essential for accurate earthquake simulation."

"Therefore, studying these newly discovered slow slip events in the Nankai Trough will contribute to earthquake disaster prevention and preparedness." 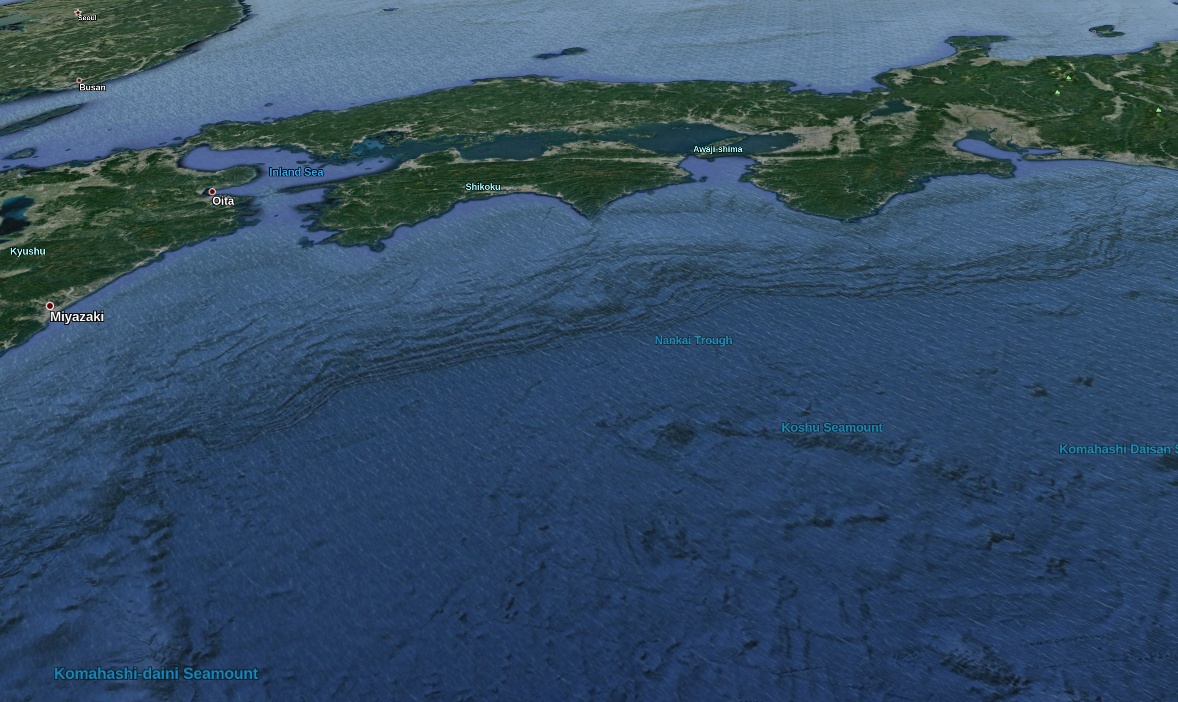 Various slow earthquakes (SEQs), including tremors, very low frequency events, and slow slip events (SSEs), occur along megathrust zones. In a shallow plate boundary region, although many SEQs have been observed along pan-Pacific subduction zones, SSEs with a duration on the order of a year or with a large slip have not yet been detected due to difficulty in offshore observation. We try to statistically detect transient seafloor crustal deformations from seafloor geodetic data obtained by the Global Navigation Satellite System-Acoustic (GNSS-A) combination technique, which enables monitoring the seafloor absolute position. Here, we report the first detection of signals probably caused by shallow large SSEs along the Nankai Trough and indicate the timings and approximate locations of probable SSEs. The results show the existence of large SSEs around the shallow side of strong coupling regions and indicate the spatiotemporal relationship with other SEQ activities expected in past studies.