Observations and data from February 2019 to present show that activity at Ambrym volcano has declined and conditions become stable, thus we now recognize the level of volcanic activity as minor unrest, Vanuatu Meteorology and Geohazards Department (VMGD) said.

Although volcanic activity has declined to low level of volcanic unrest, some volcanic hazards do remain on Ambrym specifically at the summit and eastern part of the Island, the observatory added.

These are related to the presence of cracked areas at the summit caldera area and the presence of active rifts and faults (major ground cracking) at the South-East area of Ambrym.

These are a result of the earthquake activity in December 2018 when a short-lived but moderate size eruption occurred. The eruption was focused at the summit caldera and affected Eastern Rift Zone of the island, impacting and displacing some residents.

Earthquakes triggered by volcanic activity at Ambrym, Vanuatu ruptured the ground and damaged entire villages over the past month, forcing the evacuation of 700 people living on the island. According to media reports, people from the villages of Paamal, Ulei, Sameou and Asse are being relocated to safe zones on the island.

Observations and data analysis by scientists from the Geohazards Division of the Vanuatu Meteorology and Geo-Hazard Department suggests this eruption is now over. However, some aspects of the longer-term volcanic hazard may have changed due to this eruption.

The danger zones (Permanent Exclusion Zone at Benbow and Danger Zone A at Marum including Maben-Mbwelesu, Niri-Mbwelesu and Mbwelesu) remains at the summit – about 1 km (6.2 miles) from Benbow crater and 2 km (1.2 miles) radius from Marum Crater.

In addition to the summit hazards, the presence of active rifts and faults (major ground cracking) at the South – East of Ambrymare also hazardous, they will continue to be eroded and affected by future earthquake activity located around the area (which is about 500 m / 1 640 feet radius around major cracks at Paamal village). 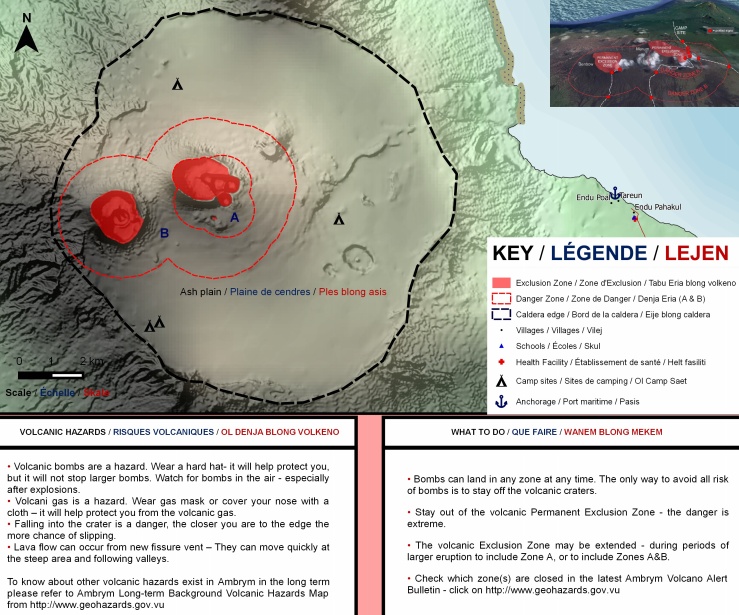 There are 3 possible scenarios in the long-term recognized by the VMGD.

Ambrym, a large basaltic volcano with a 12-km-wide (7.4 miles) caldera, is one of the most active volcanoes of the New Hebrides arc. A thick, almost exclusively pyroclastic sequence, initially dacitic, then basaltic, overlies lava flows of a pre-caldera shield volcano.

The caldera was formed during a major plinian eruption with dacitic pyroclastic flows about 1900 years ago. Post-caldera eruptions, primarily from Marum and Benbow cones, have partially filled the caldera floor and produced lava flows that ponded on the caldera floor or overflowed through gaps in the caldera rim.

Post-caldera eruptions have also formed a series of scoria cones and maars along a fissure system oriented ENE-WSW. Eruptions have apparently occurred almost yearly during historical time from cones within the caldera or from flank vents. However, from 1850 to 1950, reporting was mostly limited to extra-caldera eruptions that would have affected local populations. (GVP)