Earthquakes triggered by volcanic activity at Ambrym, Vanuatu ruptured the ground and damaged entire villages over the past month, forcing the evacuation of 700 people living on the island.

According to media reports, people from the villages of Paamal, Ulei, Sameou and Asse are being relocated to safe zones on the island after earthquakes triggered by the past month's volcanic activity ruptured the ground and damaged homes.

While there are so far no plans to relocate them to other islands, such an event is possible if the eruption intensifies again.

"For now the government have taken the decision to move these people to the three relocation centers, the safe centers. And in terms of worst-case scenario then there's a plan in place, like these people have to move to Malekula, one of the big islands in the province," said Augustine Garae of the Vanuatu Red Cross.

Garae added that the Council of Ministers promised to restore services to Ambae, further north, where volcanic activity over the past year has prompted the mass evacuation of thousands of people.

The volcano is currently in minor eruption state and the Volcanic Alert Level remains at Level 3.

Danger Zone for life safety remains at the Danger Zone B which is about 2 km (1.2 miles) around Benbow and 4 km (2.4 miles) around Marum craters (including Maben-Mbwelesu, Niri-Mbwelesu and Mbwelesu). The additional area of risk is within 3 km (1.8 miles) from major cracks in the South East of Ambrym. 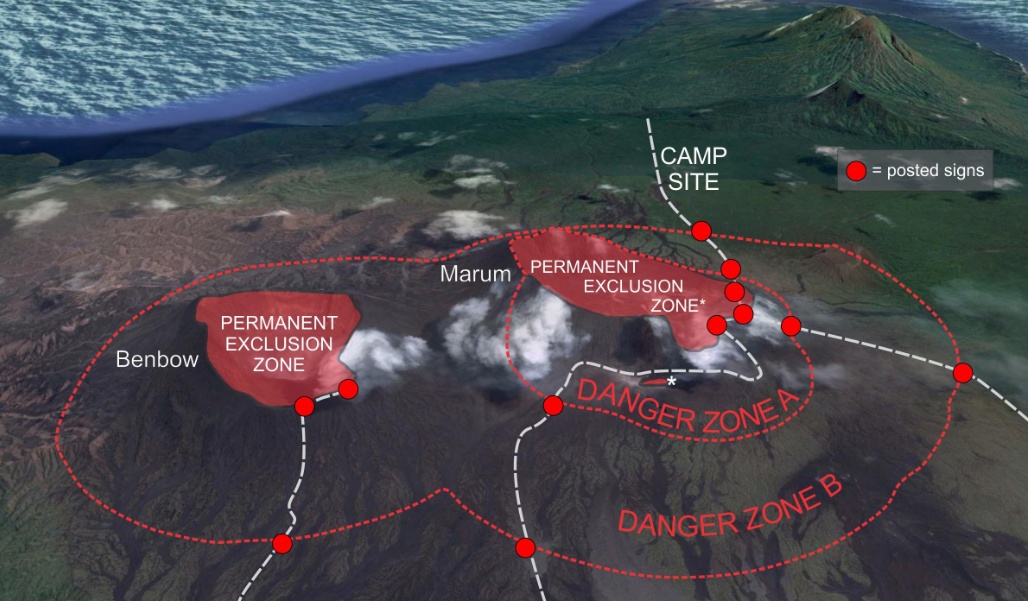 All tourism agencies, local autorithies, people of Ambrym and the general public are reminded not to access the Danger Zone B. In this area volcanic ashes and gases may be unbearable. Moreover, communities from South East Ambrym are advised not to access 3 km radius from major cracks which are vulnerable to possible flank eruptions. Image credit: VMGD

Villages of Ambrym may experience impacts of ashes and gases plumes and acid rains when it rains, especially those exposed to prevailing trade winds.

Though people are not feeling strong earthquakes compared to the past few days in December 2018, current observations and analysis of seismic data recorded from the monitoring network confirm ongoing seismicity, VMGD said in their latest Alert Bulletin for the volcano issued January 7.

This is related to the current volcano eruption, the department said. This seismicity may continue to affect the existing cracks, especially in the South East Ambrym area. Latest satellite imagery analysis confirm ongoing remarkable land deformation on Ambrym island, therefore people from Ambrym and neighboring islands may continue to expect earthquakes, volcanic gases and ashes at any time.

The possibility that the Ambrym volcano activity escalates to the level of moderate eruption (Level 4) is low for now.

Ambrym volcano is a very active volcano in Vanuatu with large caldera of 12 km in diameter and 2 active craters Marum and Benbow. The volcano has been active during historical time at both summit and flank vents, producing moderate explosive eruptions and lava flows that have reached the coast. The larger events include eruptions in 1820, 1894, 1913 or 1929. There were no extra-caldera eruptions over the last 70 years. The eruption of 1988 and 2015 are focused in the caldera.