Tropical Storm "Dorian" formed August 24, 2019, as the 4th named storm of the 2019 Atlantic hurricane season. The system is strengthening on its way toward the Lesser Antilles. A Tropical Storm Watch is currently in effect for Barbados. It is too soon to determine the specific timing or magnitude of impacts in Puerto Rico or Hispaniola, but interests in those areas should monitor the progress of Dorian. Dorian is likely to be a difficult cyclone to forecast, NHC said.

This general motion is expected to continue today, followed by a motion toward the WNW on Monday and Tuesday.

On the forecast track, Dorian is expected to be near the central Lesser Antilles late Monday or early Tuesday. 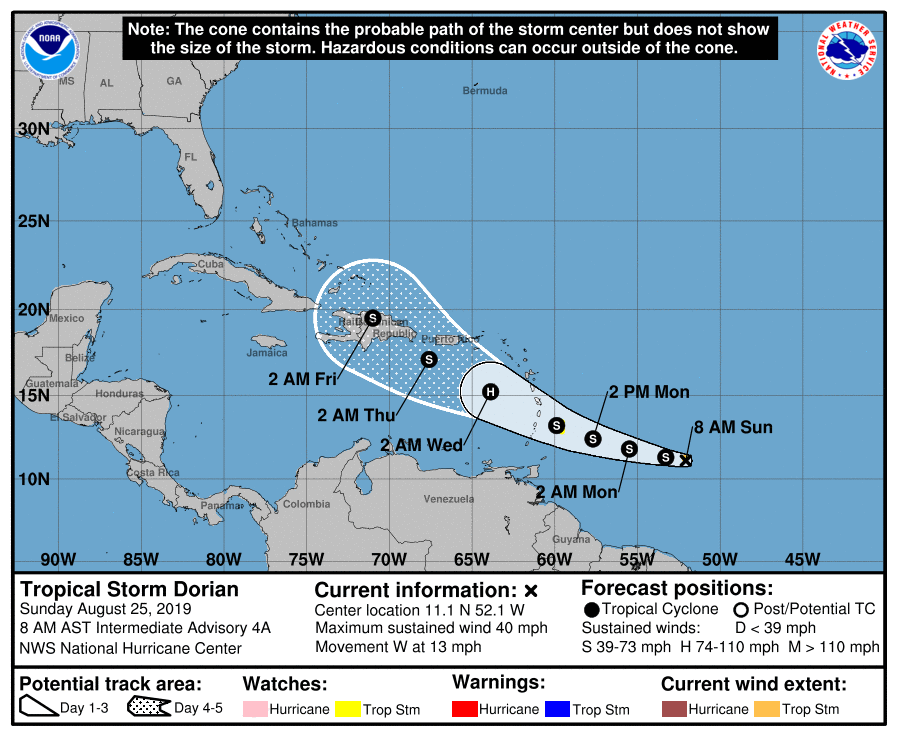 "There has been a noticeable change in the guidance tonight, with many models faster and to the southwest of earlier runs," NHC forecaster Blake noted. "This is not uncommon in the early stages of tropical Atlantic cyclones where the guidance has historically demonstrated a slow, poleward bias. Given the lack of interaction with even features at the subtropical latitudes, it makes sense to follow the trend of the latest guidance and shift the track about 30 nautical miles (55 km / 34 miles) southwest during most of the forecast."

"Notably, the GFS and ECMWF models are still south of the new NHC prediction, and further adjustments could be required later today. The intensity forecast appears to be a battle between an increasingly conducive oceanic and shear environment during the next couple of days versus plentiful dry air in the mid-levels of the atmosphere. These mixed conditions primarily point toward slow strengthening during that time while Dorian approaches the Windward Islands, and no change has been made to the first part of the forecast."

"While Dorian still has a chance to become a hurricane over the eastern Caribbean, model guidance has been trending toward a higher-shear environment caused by a large upper low in a few days. Thus the intensity forecast is reduced from the previous one at long range, although it remains above most of the guidance. It should be stressed that Dorian is likely to be a difficult cyclone to forecast due to the marginal environment it is embedded within and its small size." 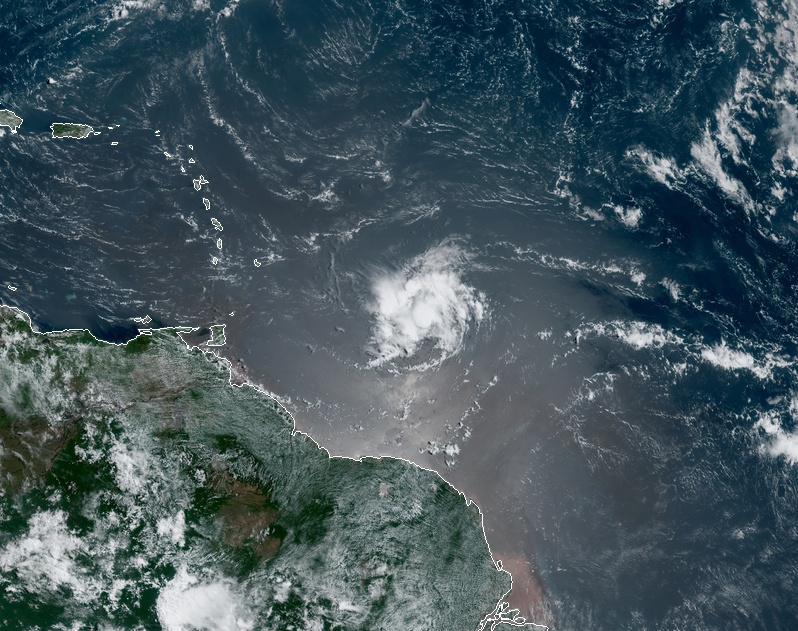 A Tropical Storm Watch is in effect for Barbados. Tropical storm conditions are possible within 48 hours.

Additional watches will likely be issued later today for portions of the Windward and Leeward Islands. Elsewhere, interests in Puerto Rico and Hispaniola should monitor the progress of the storm.

Dorian is expected to produce total rain accumulations of 50 – 100 mm (2 to 4 inches) in portions of the Lesser Antilles, with possible isolated maximum amounts of 150 mm (06 inches).

Tropical storm conditions are possible within the watch area by late Monday.

Swells generated by Dorian will be affecting portions of the Lesser Antilles by late Monday. These swells could cause life-threatening surf and rip current conditions.